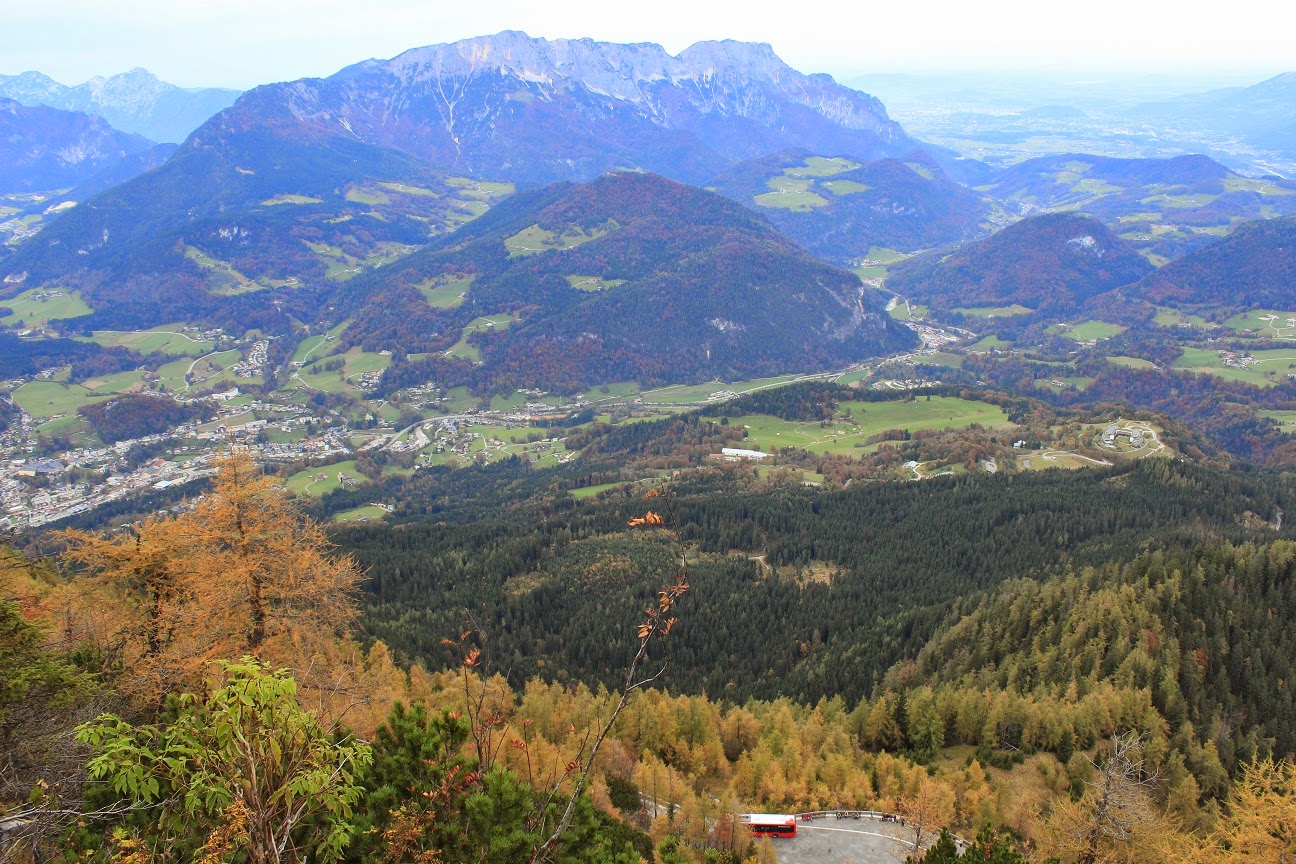 My main destination in the state of Bavaria was Kehlsteinhaus in town of Bertchesgaden in southeast of Munich, some 3 hours on the train. Kehlsteinhaus, a chalet at the time of construction, was built in 1938 as a gift for Adolf Hitler's 50th birthday but it was barely used by him.
In order to get there I left my hotel early morning and got on a Bahn train and just shortly before Bertchesgaden the train stopped at town of Bischofswiesen and we got on a bus to get to the town due to track's maintenance.
The hike starts from this area of the town called Obelzakzberg which is the place of another property of Hitler, Berghof. Unlike Kehlsteinhaus, Hitler spent quite a long time in his private residence of Berghof, according to what I read in the area, one third of his time in power was spent in this residence which is gone now. Allies have different plans of bombing all the buildings in the area. While they find Kehlsteinhaus not a very prominent target, or maybe not very easy target based on the technology of the time, they instead heavily bombed Berghof. Hitler at the time was not there of course and didn't get hurt. The SS ordered to building to be burnt the day after the bombing just to be sure nothing is left to Allies, in case they arrive.
Anyways there's this little museum at the area called Dokumentation Center (it's German so that's why you see K instead of C) which provides information about the area as other high ranked Nazi officers also had property in the area. So your best bet for hiking up Kehlsteinhaus would be getting on the bus which goes to this Dokumentation Center.
When I arrived there I saw a few signs but since they are all in German I didn't find the trail-head. Eventually I asked a lady in a souvenir shop as how to get to both Kehlsteinhaus and Berghof and when she told me I asked her which one she recommends to do first. She recommended doing Kehlsteinhaus first as the weather was nice, she added. I headed for that while I was still not certain how to go. I then find the bus stop which was going to Kehlsteinhaus but my intention was only to ask someone about the path. I, this time, checked with another souvenir shop lady and she kind of directed me: Go on the main road for 200 m. and then turn right. That is almost what I did and my guess at the time was that I had found it. I saw a few people going up the not very steep trail and walked faster to reach them and check if that was the trail. I found that they barely spoke English but when were asked they all confirmed that was the path.
The route was uncrowded and easy but I had this problem with thirst. I had a bottle and finished that so when I reached the elevator level I was very thirsty. I guess it took about 2 hours to reach there. This is where the buses stop and people can get in to the tunnel and get on the elevator to take them to the top, Kehlsteinhaus. I'm not sure if there's a fee for elevator ride of not but I waled the last 20 minutes to the top after getting a €2.5 water bottle.
The restaurant area was crowded. All those people who had come on the bus were either drinking and eating or taking photos. The views were all excellent. I didn't even get into the restaurant. Just take a few photos from around and headed down.
My next destination was the souvenir shop to buy something that I liked and also help the helpful lady although I didn't even know if that was her own shop. The lady even got out to find out about the last time the bus goes back to the town and then made a phone call to bus company information line!! Some people you find there are just amazing. I eventually select a book about the history of Kehlsteinhaus which cost €10 and I didn't want to break a €50 or €100 banknote and the lady said a credit card is not normally accepted for low price items. I told her that i had €9.70 almost and showed a few Canadian and Iranian coins that I had on me. She accepted the Canadian ones but said Iran was too far away!
I realized that I still have time until the next bus comes and my return ticket is not before 19:20 hours so used the opportunity and checked the area that Berghof used to be. It was only 20 minutes from the souvenir shop. The only issue was my tiredness that didn't allow me to spend too much time in there.
I had missed the 16:39 bus so I took the next one and went back to the town and there I checked that I was allowed to use my ticket for the departure of one hour earlier. It was OK and I got on the train and returned to the city. By the time I reached the hotel I was so tired and it was passed 22:30, If I can remember correctly. I had 3 bottles of water, a fistful of almonds and a few, maybe 2 small candy but that was an unforgettable experience.
(Photo, top: This is taken from the chalet's [today a restaurant] area looking east. You can see one bus down where the elevator tunnel is located)
at 07:01
Labels: Hiking, Travel