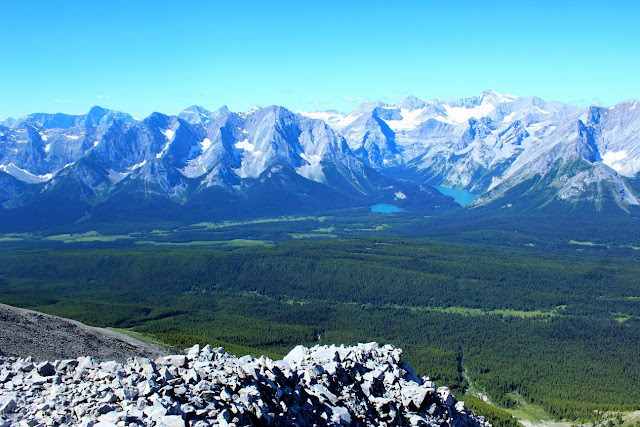 I was so tired when I came home yesterday that I couldn't even barely sat at the desk! I didn't even showered for 4 freaking hours! I felt like that a punch of people have been kicking me all around for an hour or so! Even know I have aches at parts of my body!
It's because I did a fairly hard hike after almost 6 months: Mt. Tyrwhitt in Kananaskis. I downloaded it's GPX track, from a website, first to my computer and then to my phone. GPX Viewer then was installed both in the computer and telephone and boom! I realized I have a GPS Tracker! I always wanted to buy one and never saw anything for less than $400 but here I have one which costs me $0. I tried that on streets and it was working! I woke up, with difficulty, at 04:50 and headed to Kananaskis Country. Mt. Tyrwhitt's trail-head is located at Highwood Pass which is considered as the highest paved road in Canada with the elevation of 2206 m (7239 ft.) above sea level.
I started the hike at exactly 07:11. There was only one vehicle parked there and a couple pulled in there at the same time but just for a short rest. It was here after only awhile that the tracker helped me. Without that I would have had serious difficulties. After a few minutes I saw a couple from distance and when I increased my speed I realized that there were resting. We then continued together until where for some reason(!) they chose a different path and that made them fell behind. Eventually we met again at the arch. It is a natural arch which is a good spot for photography. We probably spent half an hour there! Then we headed up the summit. The girl first didn't want to come but eventually followed and she was good. The distance between the arch and summit is not much but it's the most challenging part. It is all loose rocks. The view from the top is probably one of the best that you can see in Kanaskis. We headed down after a few photos and descending was not easy! In the old country we used to call it Sand-Skiing(!) I don't know if this term is used here or not but that is one of the major factors for erosion!
We all fell on our butts a few times but it was not serious. I had to stop at one spot and empty my boot from rocks! The good thing was that there were not anyone else on the trail until we climbed down all the way from the hard part. We reached the parking lot at around 13:50 which is not a bad timing. I'm glad that I have been able to reach a summit after a long time.
(Photo, top: The view to west from the summit shows Elk Lakes)
at 23:49
Labels: Hiking