Investing on a Relationship (2) 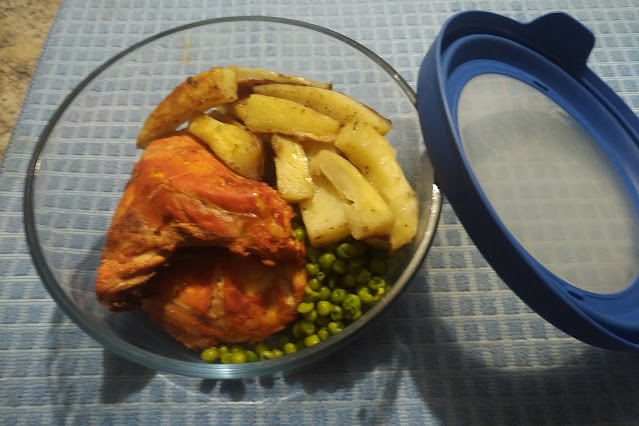 I decided to make some food and offer it to the blue-eyed lady at work, so I can have an excuse to ask her last week after a short encounter. I made some good Chicken, Wedges and Green Pees. When I first went to work I realize she was not there! She was working from home! I then told the story to Lazy Ass and while he liked to food, he didn't think that it was a good idea.
His point is that I'm a stranger to her and the first things comes to mind for her is this guy is offering me food just to get into my pants! His point might be valid but this was his idea when I said I wanted to make cookies! He said that I should show signs of masculinity and making cookies certainly doesn't seem that way!
I was a bit skeptical about this approach myself. What if she doesn't like this type of chicken? Or what if she simply says thank you?! That'd be the end! Today, though, an opportunity presented itself that showed me that maybe I should forget this woman altogether. I was sitting at the table in the break room, all by myself and one of the guys stepped in and was surprised by the big Salad bowl in front of me. I explained to him that I have been trying to have one Salad meal per day. We were talking and I offered him some. He politely refused and that was when the Blue-eyed (I'm going to call her from now!) walked in. He said maybe Carol (referring to the Blue-eyed) would like some. She said something in response while getting some water, that I didn't hear. I offered her some but she refused and I added that she had not even looked. She just looked at my way and left the room!
This woman is moody like many others and even I am! Sometimes she's friendly and at times she doesn't even look at you. I think I should ask her despite the response. At least I will not, after that, regret why I had not asked her. I don't have much to lose and it will be okay if she say no.
(Photo, top: Tandoori Chicken or East Indian style chicken, Oregano Wedges and Green Peas. The picture is a bit blur but it tasted good. I'm going to make more. Not to mention that I ate them all by myself the very same night!)
at 21:09
Labels: Food, Friends, Western Culture