A Short Trip to Eastern B. C. (Golden and Field) 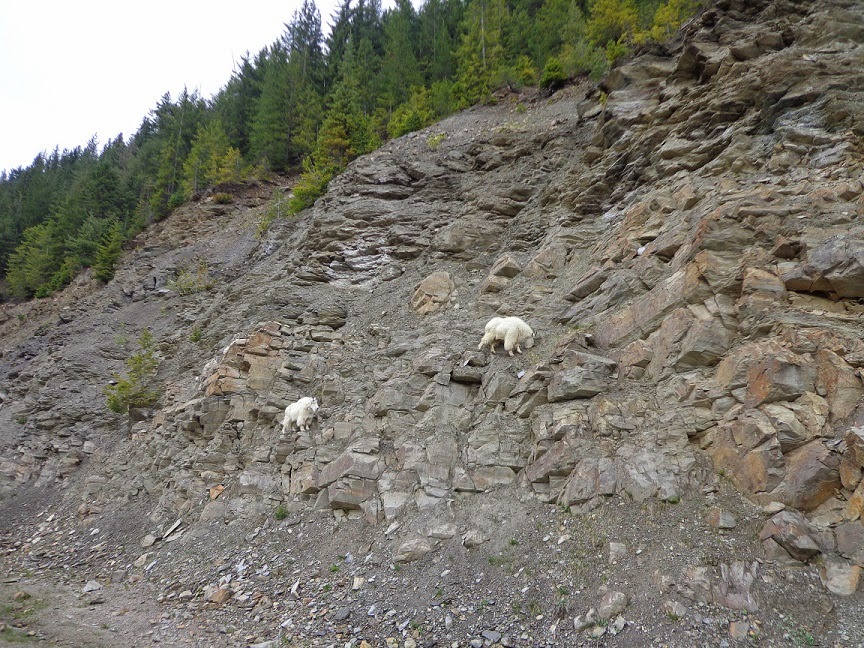 This weekend, which is almost finished, we wanted to have a trip to Montana and enjoys its beauty although we had known the weather and condition. The Lady changed it in the last minute and we ended up in Golden first. The weather was all wet but the road is nice and not busy specially after Banff. Most of people don't bother going to far.
We had out lunch in a nice little restaurant called The Island and then headed for Kicking Horse. I have to say I was quite shocked by the amount of destruction these people have made to beautiful nature. I wouldn't might a small restaurant of cafe and chair lift, similar to what is seen in Grouse Mountain but these bastards has made condominiums but mascaraing the forest! The resort was dead due to the weather. The lift was not running and the road and mountains were hidden under fog. We though parked beside where I guess was a snowmobile rental place in winter and did a short hike in the forest. The hike did not make more than 1 hour. The path was muddy in most places and light rain was upon us. We then headed back to the town to get ourselves a place to sleep. We decided to stay the night in Travelodge. It seemed off the highway and we just wanted to sleep the night and leave the next morning so we were not looking for a fancy place but now it seems it was a bad decision. The guy receptionist was a nice, helpful and welcoming guy but the place had a temperature problem which soon became a problem for The Lady. I got one extra blanket and turn the heat on but that didn't help much.
We had shut the heat off because of its irritating noise and I had a problem with the damn pillow so I got only maybe up to 3 hours sleep, at the most! This part I know is not Travellodge's fault. I have to be comfortable in my bed to be able to get a good sleep or extremely tired. None of the condition existed. So I didn't sleep enough! Breakfast was not good. At least they could have boiled egg similar to their location in Calgary which we tried in 2010 but there were only small packed-jam, coffee, apple, banana and a waffle making machine. The Lady made herself a waffle but I could not eat that because it is made of White Flour. So I made myself a small sandwich with Whole Wheat Bread and had it with my coffee. There was a girl who were supposed to do both the job of receptionist and caretaker but looked like she didn't give a shit. She was out smoking cigarette and playing with her genitals (sorry her phone! It's as bad as that in the public) and then later on two other women joined her doing the same thing which appeared to be the ones who clean and reorganize the rooms!
The hotel's premises looked nice to me. It would be a great place to stay in summer. They have ti-pees, beach volleyball court, barbecue tent and everything else necessary for summer fun but with that kind of attitude shown by the staff, especially the girls, I would definitely go somewhere else next time I'm in Golden area.
We then headed for the Glacier National Park. We wanted to go to a park with the same name in Montana. We postponed that and went to a park with the same name in B. C. The road and park is beautiful as usual. Our goal was a Bear Creak Falls in the park but we realized the area going to the trail was closed. I however pulled in the parking lot and we saw nothing but information boards, pick-nick benches and inclined garbage cans. The Lady suggested to leave due to the rain and official closure of the trail and we headed back the opposite way. We decided to take out chance this time in Field. We wanted to hike Laughing Falls Trail buy in the Tourist Information Center we were told that the road was closed sue to excessive snowfall and avalanche danger! So we head back and went home!
Although we had a bit of variety by getting out of home and trying something new, it was not a very good idea. The travelling season in Canada is very short. I don't remember May being this much wet but British Columbia is like that, most of the time. We had lots of snow in Calgary this year. It seems the same scenario was played almost everywhere else: Waterton National Park, Montana and now Yoho National Park they have not been fully operational yet due to the weather but we will go back later and we will enjoy!
(Photo: We saw these beautiful Mountain Goats in Glacier National Park grazing beside the highway and then going up the rocks where they belonged)