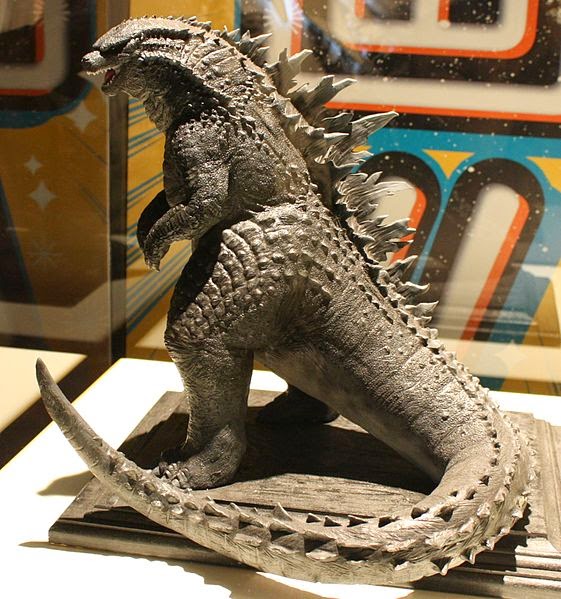 Do Not Waste Your Time and Money on Gozilla 2014. This Movie is True BULLSHIT from Beginning to the End!
We had 4 movie discount cards from the bars that The Lady had purchased this month. Each couple of bars are good for a free movie unless it is shown in 3D. For 3D movies you have to add $3 which is fine. We spent the first two on Neighbours which is a comedy and we laughed and enjoyed. The next two was spent last night on this bullshit new version of Godzilla. A true waste of money and time! After just 35 minutes I could not stop looking at my watch!
This movie has gathered a bunch of actors and actresses with different background. First there is this guy from Seinfeld, the dentist Tim Whatley who has his role for the first half an hour and then dies ridiculously! He shouts a few times and cries a few other times and that is it! Then we have this Japanese actor Watanabe whose role in Letters From Iwo Jima is never forgotten. Here in this movie all he does is gazing at a corner with wide open mouth and eyes! At times he says something that is hardly understandable because his strong Japanese accent overcomes his poor English! There are two women, one with a British Accent and one American who are both horrible and there is this guy a tall typical muscular American guy who delivers a terrible performance as well! So this is about acting which all suck!
The story is even worse! They create two more monsters that this Godzilla guy, this time fights them to save the City of San Francisco! So basically similar to Terminator who was a bad guy in Terminator 1 and a good guy in Terminator 2, Godzilla is now the hero for the people!! Special effects and sounds are horrible as well. Godzilla tries its best to scream but doesn't deliver much awe or shock! I don't know what else to say but stay away. 1 out of 5 stars for the movie and that is because these guys tried but failed. I really like the 90s Godzilla. It is a fantastic movie and I even bought the DVD later but you cannot even compare this new version to the old one.
(Photo: I didn't want to use any photo from the movie but the story of Godzilla itself is fine and enjoyable. That is why I am using one of the models here)
at 17:52
Labels: Movies