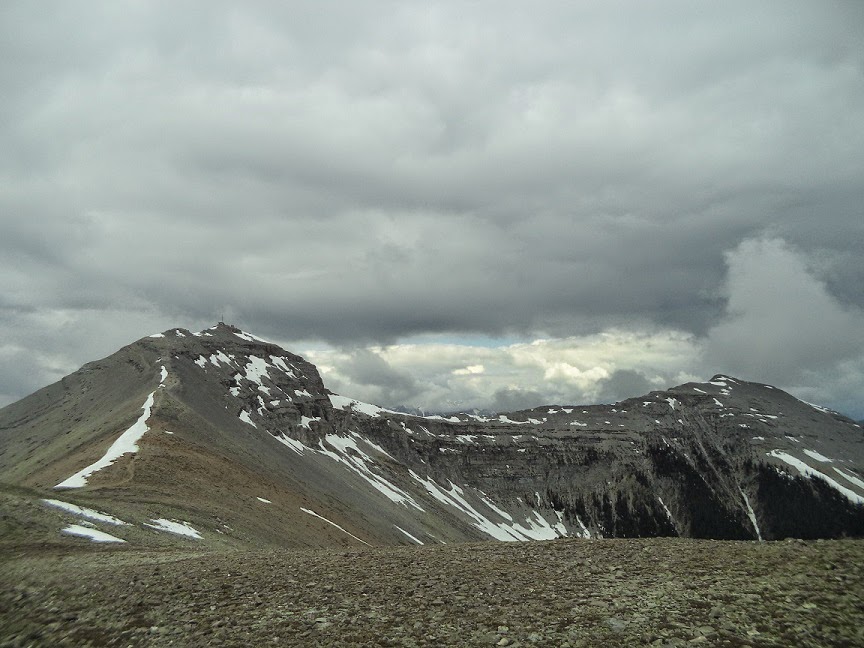 I had planned to hike Moose Mountain and I wanted to leave early like 05:00 or something so similar to the other hike I could be home by 13:00 but I had to drive The Lady somewhere so by the time I got to the parking lot it was almost 09:25. There were a number of vehicles parked there but I could squize mine in there and then someone else came and I guess he or she was the last one who was able to park there. It was mainly cloudy but no rain and the gravel road was OK but I saw mud just at the beginning of the trail. I walked up this 7 km of the road last Jan. but driving up was a bit of challenge for my poor car. Thank that I had not changed my Michelin Ice X winter tire or I would have stuck!
The trail starts in the forest and after a few minutes going down you come up and merge into a wide trail which is well maintained. I saw two ladies on the trail and made sure that I was on the right path and one of them confirmed and then I left them behind. Then shortly before the false summit I encountered a third group of people and passed them as well. I wanted to keep a fast pace to see how good I could be. The trail, from the false summit and after had sank in fog and there was not much to see. It was very good because I did not have to tolerate the burning sun and views where just amazing when the wind threw the cloud away. Snow patches still existed but he weather was nice. No need for tuque, mitt or anything. There was a little wind but was nothing compare to what I had experienced in Jan.!


The trail then got rocky and narrow and a bit dangerous. A sign is put there to tell the hikers to be careful, have their dogs on leash and not to ride any bike. To me it was almost impossible to ride a bike in that part of trial because just a little slip would send you to the bottom of a valley meters down. Just to say how fast I wanted to be and make the trip under 2 hours, particularly after I met a young fella and he said he had done it in 2 hours, when I saw the sign which clearly says: Narrow Trail, I read it as Navarov Trail thinking the trail has been named in hounor of some Russian or similar person!
The last 10 minutes were hard and a bit dangerous but I was able to make it to the top. A few people were sitting on the helicopter deck and a few were going down. None of the fire look out people were out. I didn't even sit. I walked around for about 10 minutes and then headed down immediately without sitting, drinking or eating. I was fine. Shortly after going down I realized that all the three groups that have, two of them started before me and one at the same time, were coming up. They seemed to be struggling but I'm sure they would be fine. The return route was was chosen the same as it is obvious in this writing but there is another route that I could take but due to unfamiliarity I decided not to. I was back to the parking lot in almost 2 hours, same time as my ascend. In total the 4-hour trip seems to be a good time because in most of my readings I encountered 6 hours.
(Photo, top: This is taken from the top of the false summit. On the left side of the picture you can clearly see two summits and on the right one the fire look out building and mast is clearly visible. By the time I got there the fog had already covered the top which you can see it in the other photo)
at 08:06
Labels: Hiking