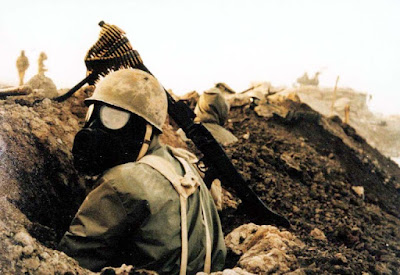 One of the stupidest classes I had during my CFLRS course was CBRN. The acronym stands for chemical, biological, radioactive and nuclear. There, of course, were bunch of French guys from Quebec who were teaching this. The aim is to rapidly put on protection suit when such attacks occurs. As usual the practical part of the practice was performed in numerous sequences that you have to remember them all, while they yell at you! Not to mention the thick suit that wearing that in a hot day would be a true misery!
I had already failed two major tests and I knew that I would be re-coursed and didn't want to participate but I had to. My hands inside the glove was socked in sweat! I also was very hot. I liked the part that they taught to drink from a canteen while we still had our mask on but wouldn't that be as well contaminated when we're under attack?!
The other problem was the speed that an individual has to have to put the suit and mask on, as soon as the signs of attacks are sensed. I guess I better not to write anything about the detail of the practice in case someone from DND is reading this but who, really, would be able to protect him or herself under attack that fast?! And where in the word CAF members would be present that there would be a chance of a CBRN attack?! In Ukraine by Russian forces? In Syria by ISIS? In Afghanistan by Taliban? Or maybe in Mali by Al-Shabaab! It's obvious that CAF has added this class or subject to the curriculum just to fill the schedule. I'm not saying that protection from attacks is not required but we have to be realistic. My friend Mehdi, and I only name him here because I'm sure no one can get to him, was attacked by chemical weapons during Iran-Iraq War. Their unit, whatever it was, he said was attacked by Blood Agent. He said that the only reason he survived was that the wind blew the gas away from him. When he walked to the other side to check on his buddies, he added, that they were so affected that it looked like they had been killed weeks ago! Of course they didn't have any suit or mask but I don't think generally people or troops are able to react to something as horrific as that quickly and efficiently.
The other point here is according to the instruction the mask should be worn in a matter of seconds and the individual should shout: Gas! a few times! Here is the question:
If anyone is able to hear him with the muffled voice, he must be in such a close proximity that the chances that he doesn't realize that there is an attack near them is next to zero. The people who are far away wouldn't help him. So why the hell should he do that?!
Anyways that's the question here and I don't want to write about this disgusting shit anymore. Enough said! I really disliked the practical part of the class like many other previous classes that the instructors think, as part of CAF policy, by being aggressive could force the recruits to learn!
(Photo: Pictures of the poor people who are injured or died as a result of a chemical attack is so bad that I don't think positing them here would be a good idea. I also cannot post any picture from CFLRS or its facility. Instead here there's a picture of an Iranian soldier he is ducked in full chemical suit. Obviously this is way after the Iranians were attacked several times and sustained casualties. This could also be a propaganda picture by the government just to show that they reacted to the crimes of Iraqis. In each way this shows how horrific the war is and I will write about that later)
at 22:29
Labels: Career, Friends, Hiking