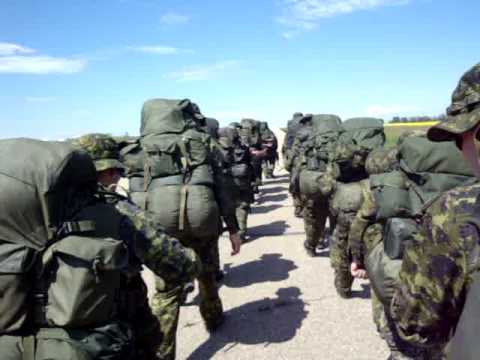 The 13 Km rucksack march is part of the trip to Franham. Some might think it's easy but not after 3 days of patrolling, walking, rappling and other stuff. At the same time it's not as difficult as it may be seen if you're ready for that physically and mentally.
My story is different because I had reached the maximum number of failures before even being allowed to go to Farnham but they took me there anyways! It's a separate story but I have to say it here as it's somehow connected. When the platoon went to the training filed on a Mon. morning I was not part of it because I had already failed enough number of test that I would have to be re-coursed after a formal review of my file. I hung out with bunch of new guys without doing much until one of the staff received a call. He told me that I should get my stuff ready to go to the said training field! I only had 40 min. while the platoon had been given the whole evening! I tried to get everything as fast as I could with the help of one of the staff and hopped in the big truck which had come to the garrison.
We rushed there and I realized the guys were involved in a sort of exercise.
The march actually happened 3 days after that! There were other activities that we did in between which will be posted separately.
We wake up quite late although we could use the low temperature of the early morning and make a good progress. Obviously the recruits should be tortured both mentally and physically for any type of training or it's not worth it! We headed to the kitchen for breakfast and by the time we started the damn march the sun was high in the sky and was burning everything!
The pace was not as fast as 8 Km but still was fast. My rucksack was not weighted by the staff but I weigh it myself just to be sure it is not less than the standard. It was a little more than 38 lbs. which is at least 5 lbs. more than the required weight. The path is marked by milestones for each kilometer. A number of people started having problem just a few minutes after the start. I was trying hard not to fall behind. I believe a number of recruits faked injury or tiredness and discontinued the march. The Cheater was among them. I think more than 7 people didn't finish and that is mainly because it does not affect their final score. I mean if you're not failing and you won't be re-coursed why the hell would you march 13 Km in a hot day?! I did it just because I wanted to prove to them that I'm not weak. I had already been out of the platoon due to the number of failures I had.

I personally didn't see anyone stopping or fainting. I made sure that I get water from the last station that helped me to do the last 2 or 3 Kilometers better. When we reached there we didn't have much time. We had to perform casualty drag. My team member was heavy but I successfully finished the 25 m. drag. After two boxes of vegged oranges were waiting for us! I grabbed and enjoyed as many as I could. We showered and went for lunch after that. I think the march took more than 2 hours. I kept the time but later made a mistake and reused my timer without recording the desired time. I know the time was between 02:15 and 02:30 hours.
One interesting thing that I forgot to mention is that during the march I realized a colourful liquid is dripping off my helmet! It was kind of red/dark orange! First I thought I was bleeding but then I didn't see any reason for that! I took it off and tried to see what it was while marching! I noticed that sweat was fading the colour of the inner part of the helmet which is a plastic type of strap protecting skull from the heavy metal of helmet! This continued to the last minutes of the march. At the end my combat shit was socked in sweat and of course we were given time to shower and change before we ate.
(Photo, above: This picture which was found by a random search in Internet shows a group of guys during their rucksack march. From the type of their backpacks and their uniforms I can easily say that they are CAF recruits. The area does not resemble anywhere that we did our march)
at 20:07
Labels: Career, Exercise