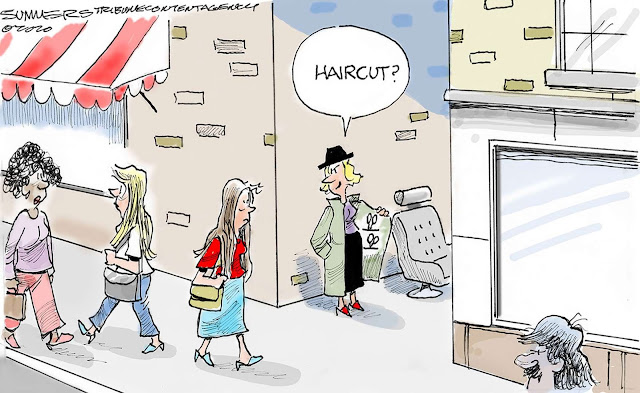 I've been trying to get a haircut for more than a week now but there's no place open. Hair salons, according to the Government, are considered non-essential services! Funny thing is all the liquor stores and newly established Cannabis stores are open! The thing is the Government wants you to be loaded, stupid, dazed and high but not clean, neat and organized! The idea behind that is obviously practicing social distancing which they say help to stop the spread but still it's not fair that I have to live like a Hippie(!) and others spend their money on mind altering items!
So I started looking in Kijiji where people advertise their shit or offer a service. A lady called me after I responded to her advertisement and when I asked her how much she charges she said $40! I asked if that was because of the virus thing. She said OK I charge you $30 only! I accepted and went to a branch to get cash as she obviously doesn't have a machine. After three try I got my card spitted out by the machine because I had the wrong PIN and the branch was of course closed! I contacted the lady and told her the story. I couldn't get cash that day because all the nearby branches were closed. I eventually went to another branch on another day and stayed in a line for nearly 40 minutes to be able to change my PIN.
When I called the lady the other day to book an appointment, she didn't respond and never returned my call despite the message I left her. Then surprisingly I received a message from a guy whom previously was contacted for the same reason! Good I made an appointment and saw her in the back of a big house. A young fella who had everything and said that he worked in a barbershop and now it's closed. I wonder if he had brought the tools from the shop. His work was nice and clean and he didn't waste any time. I gave her the same amount that the lady had asked. I was a huge relief because it really was becoming a problem. being neat and clean is essential! That's what I believe. I don't need to be boozed up or high. I need to be well-groomed and clean!
(Photo: Funny cartoon shows how, in today's society, the most basic needs have become scarce!)
at 20:24
Labels: Beverages, Western Culture