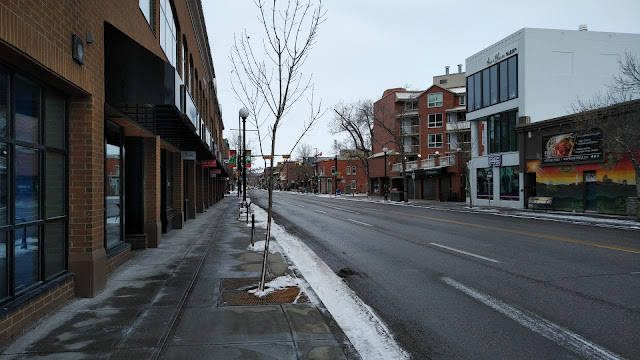 My front tires were worn out and although it seems that winter is over, I had issues a few times on the road and decided to get them exchanged today while the temperature was -19℃ in the morning. The guy at the Toyota service said that all four should be changed and then convinced me to have them balanced as well. Fine, I said.
Then they offered me a ride or C-Train tickets. I took the latter!
I walked to the station and happily I had my Heated Jacket on. So I turned it on and the walk became a little bit better! Just a tiny bit. There was no one at the station or on the cars but hobos! I was supposed to get off at 7th St. Station but somehow(!) I missed it and damn(!) I went to Sunnyside!
Then I decided to cross the river on foot! Not such a good idea in the cold morning! The wind was blowing and the streets looked scary! Then another issue emerged! I had to go to bathroom(!) but how could I do that in the middle of the road, on a chilly day when most, if not all of the businesses are closed!
There was no hope(!) but keep walking and just when I was at the other side of the river, it hit me: I can go to Midtown Market! Nice!

Bad idea again! Why? Because Co-Op has dedicated an hour in the morning for senior shopping only: 08:00 to 09:00! and it was 08:45! I couldn't wait another 10 minutes so I kept walking! It still was not that easy! The building manager had a sign that the water would be shut down for the most of the day due to some urgent repairs! Yes! Getting a relief is not that easy these days!
Fortunately there was a little water left in the tank and I used that.
It was not much better in the afternoon when I went back to get the car! First off they called me and said that the break pads needed replacement as well! They were right. That was the first break pad, front, being replaced in the past 10 years! Then they said it would take longer! I eventually got out around 14:30 and when I was just 5 minutes to the place, on foot, I received the call but the train was even more disgusting that the morning! Damn aboriginal with Beer bottler and stolen Toilet Paper(!) on my car! I got lucky that they got off before I reach my stop!
Anyways with the amount of money I spent today, now I will have to keep the car for the next 5 years or so!
(Photo, top: Kensington road, a normally busy neighbourhood at about 08:30 AM. Do you see a soul?!)
at 20:11
Labels: Natives, Vehicle related