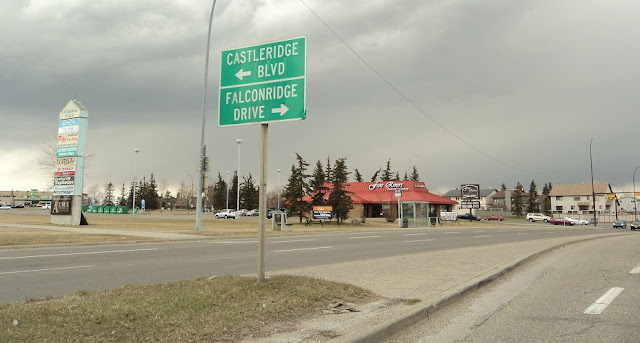 I'm back to Calgary for a few days and hanging out with The Chef as well as The Brave. One day we were wondering where we should go for lunch and we decided to try Five Rivers restaurant in Falconridge neighbourhood of NE close to The Chef's place. This restaurant used to be a Pizza Hut when I first came to Calgary but I assume due to the increase in population of foreigners (who mostly don't eat Western food), mostly from Indian sub-continent, Pizza Hut decided to give up the location. Pizza Hut is now operating on a corner and only as a take-out place but it's busy and making a good business, I believe.
Anyways we were there for a buffet and we realized that it would cost $12 each. The food is mostly vegetables, either in form of cut and ready to mix for salad or cooked in East Indian traditional way. The Chef attacked the counter(!) as soon as we got in and I got some too. I normally stick to vegetables when I go to East Indian restaurants because I know they use old meat but this time it was not as good as what I had thought. They use lots of Potato in their meals which has no nutrition but is very filling. They mixed it with other vegetables and some herbs and spices. It's very cheap but I guess that makes people fill quickly so they don't go back again! I had some Chickpea, two thin slices of Pizza (although I know the crust was not Whole Wheat but I ate them because they were made very nicely), some Carrot, Bell Pepper, Onion and Potato meal and a little of this and that. It made me full really fast and I just had a little room for their dessert. I just picked a little of a paste which had a mild sweet taste (unlike most of Indian sweets which are so sweet that you feel your throat is hurt!). The Chef, all of a sudden, felt discomfort in his system! He ate too much and too fast. So I paid the bill and we got the hell out of there. He decided to have a nap with the hope that it will heal his upset stomach, as soon as we got home. He said that he was feeling much better after 2 hours of nap/laying down/sleep! Overall Five Rivers is not such a bad place to eat in. The Brave said, the next day, that they mix new and old food together and refused to eat there with us. He instead invited to his place and asked us to cook. I cooked Eggplant Stew (an Iranian dish) for him and he liked it. It's a separate story which I don't think I should say or maybe I will!
They also offer a variety of drinks but I think no alcoholic beverages are served because they need a special licence for that. The drinks are the regular Soda Pops and I guess traditional East Indian drinks as well. If you're fine with vegetable meats, don't care about a dirty and not well-maintained environment which air doesn't flow and you feel suffocated after a few minutes of sitting at the table or booth (I guess they have tried to make an environment quite similar to India's! Warm, no air flow and humid!), then you'll be fine in Five Rivers. You get what you pay for.
(Photo: This view looking at north shows where Five Rivers restaurant is located in NE Calgary. The architecture shows, clearly, a Pizza Hut restaurant)
at 23:12
Labels: Beverages, East Indians, Food, Friends