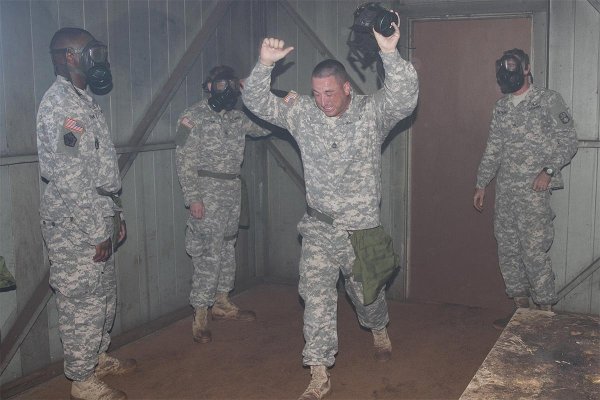 One of the tests/activities during the second Farnham trip is practicing chemical attack protection simulation. This by far the stupidest and most ridiculous of all the subjects of basic training! I've already posted about the concept of CBRN and how it is looked at in CAF. This activity is the testing of that.
This is how it's, partially, performed and I have to stress here that I have no intention to reveal any military secret or similar. So I provide as less detail as possible.
You're waiting to enter a gas chamber. You're in full protective suit and your mask is attached to you. As soon as the instructor orders, you rush in to the room where another staff is awaiting you. You're supposed to take your mask on in a matter of seconds. As I entered I felt burning in my throat and my eyes! That, as I was informed later, was Tear Gas to simulate a situation that someone might have during a CBRN attack. I took my mask immediately and tried to put it on but according to the instructor it was not properly on. So he threw me out and I waited for my second chance! This time I went to another instructor which he seemed more lenient! This time I was able to pass and then I was sent to the next room to do practice some sort of cleaning and then we were sent out!
I forgot to mention that I saw a couple of French girls whom where not able to do the practice correctly the first time and they came out crying and cursing!
(Photo: The US Army has the same practice for their basic training as CAF as it's seen in this picture here. A recruit enters a gas chamber and has to react immediately while the instructors and examiners evaluate his or her performance)
at 19:30
Labels: Career, History

Little bitch you sounds like one of those kids who barely scrapes through basic if at all only to comment on the military like you know a thing or two. I hope your pussy ass isn't wearing the same uniform as me.

Calm down! You forgot to take your medication. Didn't you?! Read this: https://atlarge.blogspot.com/2017/09/cflrs-notes-37-who-joins-caf-normally.html
You're gonna love it!