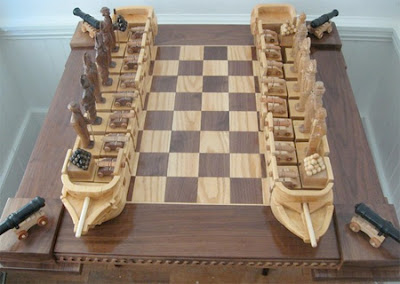 You got plenty of free time while on training in CFLRS at times because the training method here is Run ... Run ... Run ... and then Wait ... Wait ... Wait! Unfortunately you cannot use the time you have the way you want and most of it wasted. In TRP (Training Reintegration Platoon) though, at times, you can use this time the way you want. In fact many use it for different thing including volunteering, OJT (On-job Training), etc. Some play cards, read books or simply hang out and talk. I mostly played chess when I had time. At first there was a set which one of the guys had purchased from a local Wal-Mart. Then another fella bought a nice set from a store in town for some $100. And then there was one in the office that guys used. So there were 3 or even 4 sets on the tables and people were playing! It was amazing! Even one of the staff came a few times and he was interested. One of our Sergeants!
I enjoyed that a lot and slaughtered everyone who played against me! In fact there were only two or three that I had to put extra effort. The rest vaporized after a few minutes. The Sergeant then suggested me to start a tournament(!) and it was shortly after I was sent back to regular training.
I continued playing in the platoon although we didn't have same amount of time. I played against a few and beat them of course and then when we came out of our induct, I continued playing through internet sites, mainly Lichess as no one was interested! Normally everyone goes out during the weekend. They go to bars, strip clubs, restaurants, hotels (to have sex with their new partners), etc.
When I sent back to TRP again, as a result of being re-coursed, it was not that much action but I gave it a little push and beat everyone again except for this Oriental girl whom I played against two times. The first time I resigned because I knew I didn't have any chance and I decided to quit honorably(!) instead of being defeated and shamed! The second time our game was interrupted and we abandoned it. She was good.
Chess is a very good game but similar to anything else that could become addiction, this could be an addiction as well. This concept is very well explained in movie The Chess Players by Satyajit Ray. I still think it's better than playing cards or hanging out and bull-shiting each other!
(Photo: An interesting chess set! It looks like a skiff but it's longer. It certainly is not a ship but it's just for fun! The four cannons at the corners look excessive though!)
at 21:44
Labels: Career, Western Culture