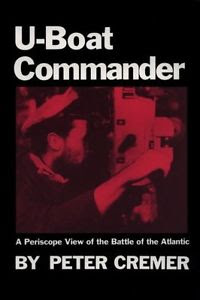 Submarines have always been my interest. The first time I found myself a fan of them was when, years ago, the movie Das Boot was shown on TV in the old country as a series! The movie is a bit longer than 02:00 hours. Then when I joined CAF and of course I never finished my Basic Training(!), I selected a trade in the RCN that would have made me eligible  to even work in submarines but soon after starting Basic Training I found I'm the man of freedom, nature and mountains and I would be confined neither in a ship nor in a submarine!
This, however, did not prevent me from enjoying books and movies about submarines or as it's said in German, Unterseeboot.
One of the books that I've recently found and started reading is called U-Boat Commander. It's apparently written by one of a few German submarine commanders who survived WWII. The book is of course translated to English by a British guy but despite the fact that the book is very interesting, the translation sucks! It's horrible! The funny thing is the guy, named Lawrence Wilson, sounds like a British person or at least I could easily say that he's from an English-speaking country although I don't know much about Anthropology. The mistakes are so stupid and obvious that even me, who English is not his first language, notices them. Here are a few examples:

1) The first thing that comes to mind is that the book is about one specific submarine commander, Peter Cremer. So it must be titled The U-Boat Commander. First obvious and stupid mistake.

2- Then the term U-boot, which is pronounced oo-boot in German is short for Unterseeboot. So we don't have any thing as U-Boat neither in English nor in German! So the book is titled incorrectly. At the best it should be called The Submarine Commander or Das UBoot Kommandant, the first one being a pure English title and the second one an only-German title.

3- Page 24 of the book, the Naval Institute Press edition, goes, as the story is narrated by the commander: My crew comprised 25 men, including ... . He, for whatever reason is not a fan of prepositions.

4- He calls a submarine fleet, U-Boat arm!! I don't know what type of English he studied!

I'm sure there're plenty more mistakes but I don't want to ruin the book! I also have to mention that the above is found in the first two chapters, 15 pages only.
I checked the accuracy of a number of characters which are introduced in the book and found them all correct. For that I have to say that the book is recommended for the ones who are interested history of WWII or navy, ships and submarines. I probably will have another post about the book later when I finish it.
(Photo: The cover of the book, perhaps the original publish)
at 16:38
Labels: Before Immigration, Books, History