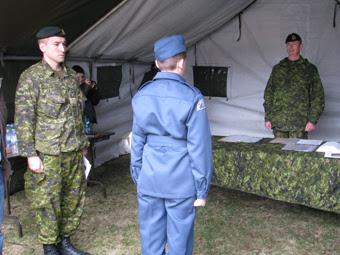 One of the staff, a P. O. (Stands for Petty Officer, a ranking in RCN, in case you didn't know and that could be P. O. 1 or 2 but they are only addressed as P. O.) approached me and a few others once and asked us if we would be doing anything the coming Mon.. The answer was no and he ordered us to attend a Summary Trail at a certain hour on the day. From the name of the event I knew someone was in trouble and would be punished.
At the specified date and time, people almost filled the room and a Major and his aid walked in. The accused was then ordered to enter. He was marched in by one of the aids while escorted by two recruits. They were ordered to stand in front of the judge, the Major, all three of them.
The story was an idiot had a bottle of Red Wine on him when he returned from leave and it was found in his closet in a plastic bag! The guy said it was a gift from his grand mother(!) and added he never drank! The Major as a judge indicated that he had to prove the following four:
1- The identity of accused as the person who committed the unlawful act.
2- The date act was performed.
3- The location, and
4- The act itself.
He made a telephone call to the person who had found the bottle and played that for everyone. The person, a Warrant Officer working in another base named another person and then he was called to the room and after a three way conversation it was proved that the guy who was standing in front of the Major was the one who had the bottle within his personal stuff on that specific day and in the specific quarter of the school. The concept of having alcoholic beverages was found in contradiction with one specific order of either CAF or the school, I don't recall.
The witness who was called to the room was a Quebecois and after putting his hand on the Good Book (as it's said in The Shawshank Redemption!) told that he didn't speck English. So the Major asked the accused if he trusted him translating the witness and the accused accepted. Then words were exchanged between the Major and the witness and it was confirmed that the accused was the one that the alcoholic beverage bottle had been found in his quarter.
Here was the funny part. One of the escorts, a tall blonde girl extended her arm as a sign of excusing herself to ask a question and requested to be seated! I understand that some people are not strong enough to stand on their feet for a long time but that just showed the stupidity of selecting her as an escort in the Summary Trail. People here in Canada, in different levels of society and especially politicians have been trying to say men and women are equal and they don't want to be Sexist by selecting only males. They ignore the fact that simply selecting a female to show you support women (perhaps to get their vote in the next election!), regardless of the fact that she might not be qualified, is extremely stupid!
The girl first sat and then left the room, accompanied with another girl! The session was continued with the point by the Major indicating he had gathered all the facts and he was about to come to the conclusion. The accused was found guilty and he was fined $150. However he was told that he would have a chance for appeal.
The point here, as the Major indicated that, was to have a message to the rest of the recruits. They have to understand that there are rules to follow. They are in military and they have to give up their stupidity for the time they are under training and after that as well. I personally don't think many get the message but sessions such as that is required. There's no doubt for that. However I expected CAF to be more harsh in punishment. This guy was let to continue his training. I think he should have been suspended until the Summary Trial day and then, would be send back to training when possible after a much bigger fine. That's how they can stop stupid people like that in CAF.
This is another example that shows how Canadian society is soft on people who do unlawful things. It's quite similar to DUI. If harder punishment is available, the amount of crime or unlawful act will be decreased. I will probably have to separate posts about this topic and the equality of men and women.
(Photo: A member is standing in front of an officer or NCM as part of a Summary Trail in a tent. Picture was randomly selected from Internet. Hope I have not violated any military rules. No name is revealed here and the face of accused is not seen. I assume I should be good)
at 21:50
Labels: Career, Western Culture