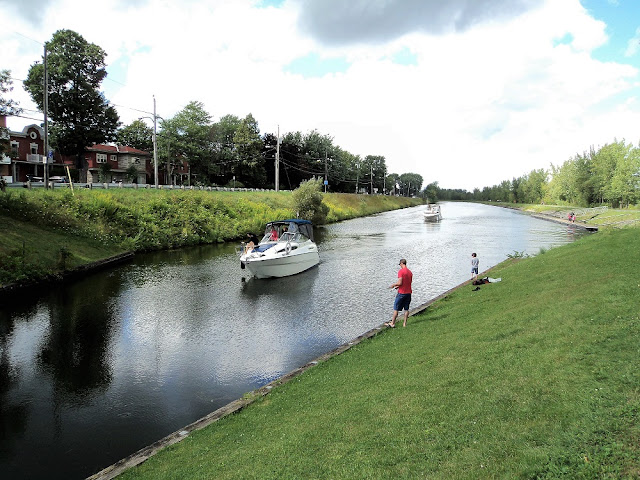 I and guy from New Brunswick hung out for a number of days in the same pod before being released from CAF. He was a little bit crazy but funny guy. The poor fella had some mental issue and for that he got released but it was not too serious to prevent me from spending time with him. The subject of this post is not him but I thought I should refer to him briefly before I go to the main topic. We shared good laughs together and I know he or anyone he knows ever finds out about it. So I'm not worried although I'm not telling anything bad about him. He admitted he had problems in the first week of training.
Anyway we left the school together one Sat. morning and walked all the way to Richelieu River in Saint Jean Sur Richelieu. It's a very nice place. Good for jogging, cycling, fishing and photography of course. While walking on the pathway we reached a small building with Parks Canada logo and people who had the uniform on. We then realized that we had reached Chambly Canal National Historic Site. Basically this is a canal which is made parallel to Richelieu River and it used to be a high-traffic area years ago. They made that, according to the Parks Canada lady, with her strong French accent, because the river is shallow at parts and there are falls at other spots which makes it impossible for boaters to have a safe trip or one at all. So this was built years ago. Nowadays is just used by recreational boaters from the US and Canada. We saw a number from both countries when we were there. The system works similar to the way that Panama Canal works although I have no idea which one is made first but it's easy to find out. The boat arrives and stops before a compartment-like section. The first gate opens and water enters the compartment and its level rises. Then the boat enters and the gate gets closed. Then the second gate gets opened and the boat is let go. The aim is to equalize the level of water at each section and apparently there's a charge for that. 4 Parks Canada employee where seen there and they had a little building. It seemed a little excessive especially knowing that Parks Canada is very careful with hiring people and a few years ago laid a big number off.
Another interesting about this site is its location. It's located in Province of Quebec that in many ways separates itself from the Federal Government. It would have been a good question both from my buddy from New Brunswick and Park Canada guys but I forgot to ask!
We watched an American boat passing and saw how the system worked. We hung out a little and walked a bit. I would have been spent much more time in there, if I had been on vacation or something but we had to go back and I was in jeans and shoes. So we headed back after getting a drink from a local McDonald's.

Here was one a question popped up: There are thousands and thousands of historic sites in the country which are being destroyed over years and no one pays attention to them. Here in Canada with only 150 years of history they try to preserve things as simple and usual as a canal! One of the actual historic sites that I visited in the old country years ago, nearly 20 years ago, was a Zoroastrian temple in Isfahan. On those years I clearly remember that only ruins of that had been left and everyone could go on the top of walls and structures. I'm not Zoroastrian and don't follow any other religion but all of the mosques in Isfahan are considered historic sites and national heritage but no one asks these guys why they don't mention about the Kings who lived in the nearby palaces while they say they overthrew years of kingdom reign in the country. The answer perhaps would be that the Safavid preserved Islam and what we see in the world as Shia Islam is simply because of their efforts.
(Photo: Two boats are approaching from north while people are fishing. It's interesting to me that people prefer the canal for fishing over the river. My experience in fishing is limited to one time years ago in a river which was going to Caspian Sea and that was a disaster which I'm not even going to tell it here! So I'm no expert to say why they have that preference!)
at 22:47
Labels: Before Immigration, City Sightseeing, Politics, Religion, Travel, Western Culture