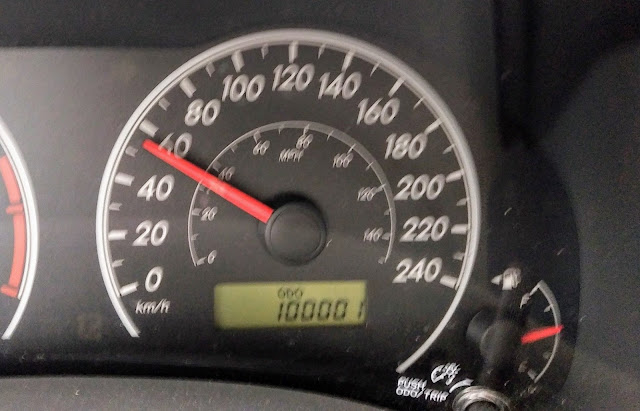 I purchased my Toyota 10 years ago in Port Moody, British Columbia brand new a day like this. It was exactly 19-09-2009. It never gave me trouble and I drove it a lot but on average only 10,000 Km a year which is not much compare to what others drive in North America. Has never had a major accident or overhaul. The majority of the mileage comes from the trips I had to British Columbia and once to Montana. To add all other trips for my hiking which while they were mostly within the province of Alberta, There were a lot. I guess if I had not been to many hiking trip, the mileage could have been half of what it is.
I wanted to buy a new one, hopefully a Prius but now that I have gone to the wall, nose first(!) I don't think I can. Besides the priority should be a property so I can at least live peacefully in a nice neighbourhood. That's another subject but I know while this car will last me another 10 years or more, I will have to get another one. I have to get a well-paid job first!
(Photo: A very not clear photo of the dash shows my odometer when it just turned 100001 Km!)
at 19:28
Labels: Vehicle related