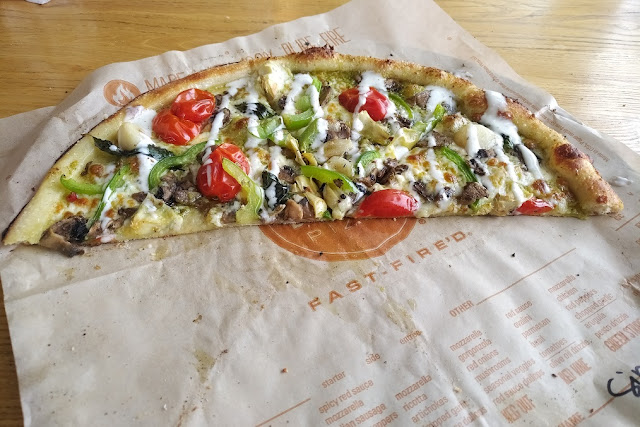 Lazy Ass called me and said that he would have liked to hang out and I said yes. He's a nice guy and his laziness only causes him issue, not me! So he introduced me to Blaze Pizza. With the restaurants re-opening in Calgary and area we were expecting the place to be jammed but it was not like that but at the same time it looked like people are coming out. There were a good number of customers in there. Basically the way that Blaze Pizza works is similar to Subway: You go in there and you build your own pizza although you can order from their menu. It was recommended to me and I followed. I don't eat anything which is made out of White Flour but had to make an exception and why I did that was:
1- They have thin crust option which is as thin as Lavash.
2- I had worked a lot and a little extra sugar would not hurt me.
3- They offer Cauliflower Crust but they charge $5 which considering the price of the pizza, it's a little unreasonable. besides I wanted to try the pizza first and see how the ingredients and baking work.

Here I was and I started with Pesto Sauce although I have made real Pesto and I know how expensive it could get! I continued with Mushroom, Tomato, Basil, Artichoke, Green Paper, Mozzarella and Blue Cheese. I basically made what I always order: Vegetarian Pizza. Lazy Ass, on the other hand loaded his with different things and eventually finished it off with Jalapeno and Hot Sauce! being from East Indian decent, I thought he would be okay but apparently it was even too hot for him.
The pizza goes in a fire oven that you can see even the end of it and come nice and hot for you. You can add some more sauce at the end. We sat there and enjoyed the pizzas and I have to say that it was good but I needed to eat at least 3 to be full. The pizza, and that it medium size cost $14.33 including taxes. That is not for once in a while but, again, it's too much for someone like me who needs 3 to get full. Perhaps I should eat that as an appetizer! Lazy Ass asked me to rank the pizza regardless of the price and I told him that I would rate it 9 out of 10. The only problem is that they don't offer it with Whole Grain Crust and that's how I would like to eat it. I also realized that the Cauliflower Crust comes in medium size as well, probably because ,most of the people rather not to pay an extra $5 to be healthy!
(Photo: My pizza after I ate half of it. It for sure looks good. It's the ingredients that I have chosen. Pity that they don't offer Whole Grain Crust or I will be there once a week)
at 20:50
Labels: East Indians, Food, Friends