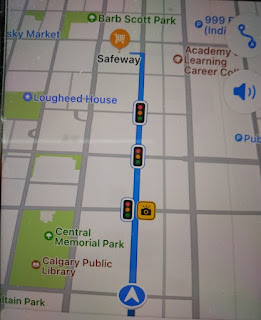 This telephone that the employer has given to me is really good. It has features that my own telephone doesn't including this sort of pathfinder, if I can call it, which shows all of the lights and cameras on my way! In addition to that it gives warning way ahead so I can reduce my speed, if necessary. That's probably something that the Government of Alberta wouldn't like but there're even signs which shows there's a camera ahead and when I'm listening to the news on my way to work every morning, they even mention if there's a police car with camera at a side of a road. I don't really know how it works! You put someone and pay him and for vehicle to catch the offenders and then some else tells them you're doing that! The who scenario seems stupid!
(Photo: A screenshot from the phone while I was driving in Downtown Calgary. Speed limit is shown as well, at time. I don't know why not here!)
at 21:00
Labels: Governments, Vehicle related