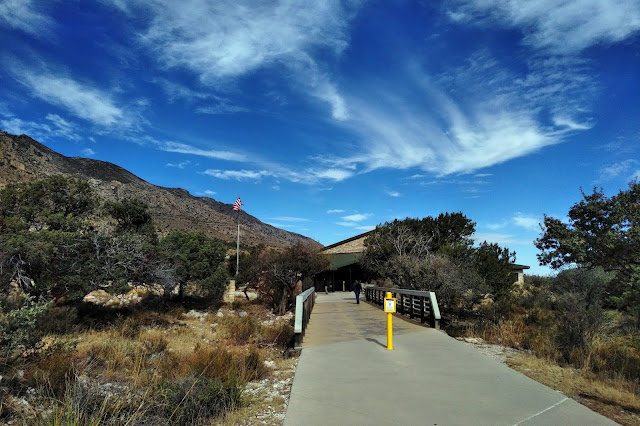 I'm heading back east again after doing the hike of Guadalupe Peak. I'm staying in Fort Stockton, TX, tonight. Very tired and both of my knees hurt! It was an easy hike overall for a summit which only stands 2667 m. and the elevation gain is roughly 914 m. but what happened was I, first, when I got there, I had a little difficulty finding the trail-head and the visitor center was closed. So I referred to my phone and the GPX format file that I had downloaded and I found it. Then I realized that there's a campground just at the trail-head where many people are about to start their journey(!) from there. I head up the trail and I passed 3 or 4 parties when I realized a fella is approaching really fast. I turned back twice and he was shoulder to shoulder with me. A taller man with all white beard but he was very comfortable and relaxed. We started talking and going up together which was very good for me but I think perhaps that's why I have painful knees now because I had to pace up to catch up with him!
We reached the summit in about 02:17 (2 hours and 17 minutes!) which I think is a good time but it was so windy and cold that I, who usually stays at any summit for at least 15 minutes to take many photos, had to head down after 7 or 8 minutes! It was cold and I took my gloves out to be able to take photos and my both hands were numb! My left hand was swollen so badly for hours, which I had never experienced that but now is fine. We were back to the parking lot at about 12:45 which makes the entire hike something around 05:15, which is considered a good time. I will write more later as I'm dead tired now. I've got to take shower and hit the bed.
(Photo: The visitor Center at Guadalupe Mountains National Park. It's a very nice place where you can see many things and they have nice gifts as well)
at 18:52
Labels: Hiking