Not such a good start for a Trip 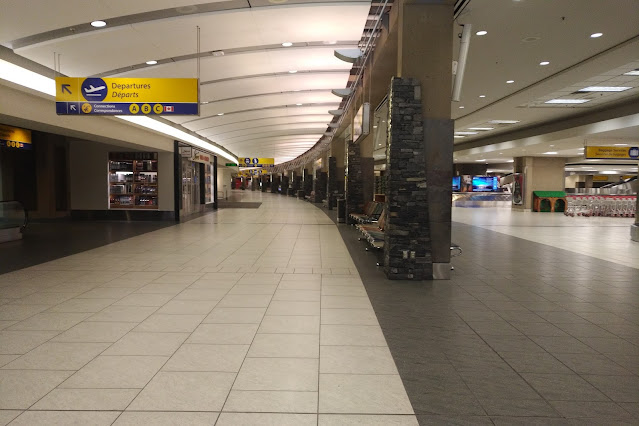 I'm writing from a hotel in Houston, TX and I gotta say, it hasn't been such a pleasant trip so far! YYC was fine. No problem at all. At the CBP counter I had a chat with a Black officer who was very friendly and nice. No issues at all. I don't even see a stamp on my passport. Then WestJet flight was a usual. enough legroom, couple of cheap drinks(!) as usual and nothing else.
My stress started at George Bush Intercontinental. No check or nothing at the airport and I went to the designated spot for the Rental Car Center shuttle. It must have been at least 20 shuttles and buses passing by and none stopping, which made me nervous that I would miss my reservation! A bus eventually came and I got on! The car renting process was easy with this difference that firstly they gave me a Camry, instead of Corolla and then the guy asked for coverage which would cost another $130! I declined that and said that I would come back a few days before the actual return day and would obtain it.
The drive to the hotel was not so bad except for the fact that I was getting away(!) from Houston. I mean I was going to the outskirts! And there was traffic but actually in the highway just parallel to the road I was driving on, mostly which was a toll road! I then reached the hotel which looked like a ghost house! Not many people around and just one guy at the counter! A few cars in the parking lot, meaning not many guests. I tried to call home and tell Mom that I had arrived safe and sound as I had called her earlier from YYC. No damn signal! I couldn't believe this shit! My plan includes unlimited call and text to the US and Canada and this is the shit I have to deal with! I then decided to get something to eat. So I asked the front desk about a nearby grocery store but after what he told me I decided to check the GPS and find a place for myself! Bad idea! The first place that the damn GPS directed me to was just a dark place with no lights at all! Then I selected a nearby Wal-Mart. Wrong again! I ended up at a place called Sam's Club and I knew that before even entering but went in anyway: It's a store similar to Cosco which you need to be a member to shop! The closet place, on foot was a gas station. I grabbed a small bottle of milk and was going to pay but I was told that they could not break my $100! I put the milk back and went to the hotel.
I had made a Peanut Butter & Date Sandwich at home and although I wan't very hungry I ate that and then I made some Decaffeinated Coffee and drank it. I then decided to get something from the hotel's pantry! Yes the hotel, Staybridge Suites, has a pantry and to my surprise a 42 g(!) Kit Kat candy bar was $2! But what do I care?! I have US change which have been sitting in a bag for too long. So I bought one. Then I thought: How the hell I am going to inform Mom about my well-being. She'll be so worried.
I decided to call The Mumbling Guy, using WhatsApp and asked him to call Mom! I told him that I was in a place which there's no signal but WiFi is available! The guy accepted but I'm sure he was not happy doing this! He barely left a message and said he had called! It was so difficult for her to call me back! Most of the places that I have been to, I have not seen many people wearing masks. The most frustrating part is nobody, nowhere, I repeat nobody, nowhere has even asked for proof of vaccination or the damn PCR Test result! The latter cost me $150, plus I had to switch one working day which was not convenient at all. So the question is: Would this trip worth all the cost and agony(!) that I've been through so far?!
(Photo: The main floor of YYC looks deserted! No soul! Not one!)
at 21:01
Labels: Travel