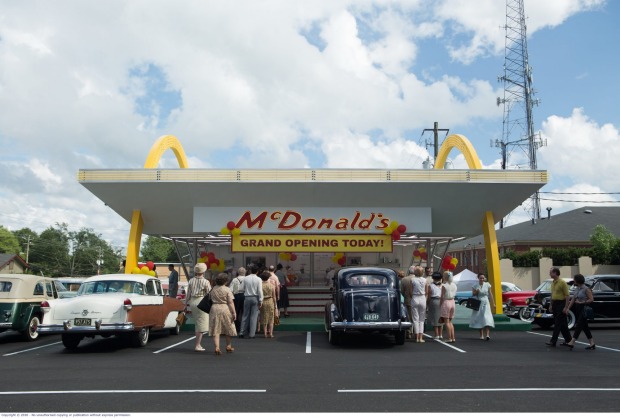 I had not been to a movie for a long time and I decided to see what's available in theaters. Rather than usual Hollywood trash which is produced on monthly bases the only movie that caught my eyes was this new one called The Founder. This is the story of establishment and growth of the biggest chain restaurant in the world, McDonald's.
Surprisingly The Chef wanted to go to a movie for the first time in his life in Canada(!) and asked me what was on. He added that he wanted to get away from his stressful life now that he's on the verge of losing his house less than 2 years after he and his fool friend(!) bough it!
We went to Sunridge cinema which is not located in a nice neighbourhood of the city because The Chef himself doesn't not live in a nice neighbourhood of the city(!) but that was alright. I had not been to Sunridge because I knew what I should have expected but being close to The Chef's and considering how he looks, I decided to go there despite The Chef's request to go to Chinook!
There were as many as 10 people(!) in that specific theater! That, I had expected because people usually don't get entertained by watching the story of how a business is developed! The movie is good. I liked the old style cars and the way they show people in the 40's. Michael Keaton has the main role and that is the guy who basically is responsible for McDonald's today's growth and success, not the original McDonald's brothers who opened the first restaurant in San Bernardino, California in 1945. One interesting message that the movie sends to its audience is what is behind every success and there's only one thing: Persistence! This is shown in a scene where the milk shake machine salesperson Ray Kroc is frustrated of several unsuccessful attempt on his road trip and is staying in a hotel. In there he is listening to a sort of course on vinyl and there he gets the message. He's absolutely right. You could be a very talented man, you could be the most educated, etc., etc. but the only thing that helps you to get the thing you want is persistence. A good example of that is myself. I have good education and I don't think I'm a guy who lacks talent but I don't have much persistence when it comes to what I need. That has kept me behind, for years. Every time there's an opportunity I say what the hell! If I don't get it, there'll be another one soon but that is not always the case especially when you get old!
The movie is almost an hour and half long and at parts discusses the legal issues which might sound boring to some but in general is good and I recommend that. I even consider buying the DVD when it's released. It's nice to see the US when it was in its glorious years of development and growth. At least 3.5 out of 5 for the movie. By the way one of the McDonald's brothers in the movie is the guy who portraits a barber in Clint Eastwood's Gran Torino.
(Photo: This picture shows one of the first McDonald's restaurants in the movie)
at 22:43
Labels: Food, History, Movies, Western Culture