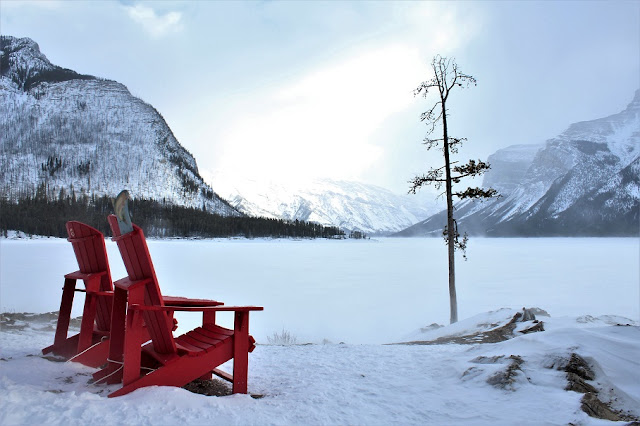 After months of staying home and mostly doing nothing and wasting time, this past Fri. I decided to have a hike in Banff National Park. Bad Mistake! That's how it started and continued! The first mistake was selecting the hour. I normally leave home at about 05:30 AM and that's on weekends when most of the people are sleeping. This time I left at around 06:30 when many were going to work or simply hitting Highway # 1 for any reason including skiing! By the time I got my coffee and entered the highway it was past 07:00 and lots of traffic and stupid, careless drivers on the road(!) including a bastard who pushed me toward Stony Trail and cost me at least 15 min. especially because of slippery roads and the stupid not-updated GPS! The road was not bad but then another problem showed its nasty face: I needed to go to bathroom very badly after the coffee! Coffee always does it for me and it has always been a step in my hiking trips! I have to go to bathroom after or during drinking my morning coffee! Finally I decided to go McDonald's in Canmore and for that reason I took Three Sisters Parkway. Just shortly before reaching the destination, the damn GPS started to act crazily and I simply ignored it and got myself to the desired spot and relieved myself!
Having the new Discovery Pass, I didn't have to stop at the park gate and simply went through, although I strongly believe that Federal Government has made a big mistake issuing that annual pass. It results in nothing rather than more damage to the environment and more wildlife getting killed on the highways.
The 5 Km. road to Lake Minnewanka where I wanted to have my hike was covered completely by snow but a plower/sander was working and I was fine.  Happily there were not many people basically because snow had been predicted for the area while the temperature was not very low. My next mistake appeared here and that was not having a good jacket on! I don't think with the amount of snow on the ground, I would have a good chance to reach my point of interest, Aylmer Lookout, Had I worn a good jacket! I just spend about 15 to 20 min. there, took a few photographs (which wouldn't turn very nice!) and left. I should have a much better planning for my trip the next time I'm going or it would be the same disaster!
(Photo, top: Parks Canada chair on the shore of Lake Minnewanka. Parks Canada actually sells these chair for $299 [for kids] and $399 [for adults] through its shopping website. I wonder who pays that much for a chair which Park Canada declares has been designed ergonomically and all its related earning would be spent on national parks)
at 21:59
Labels: Exercise, Governments, Western Culture