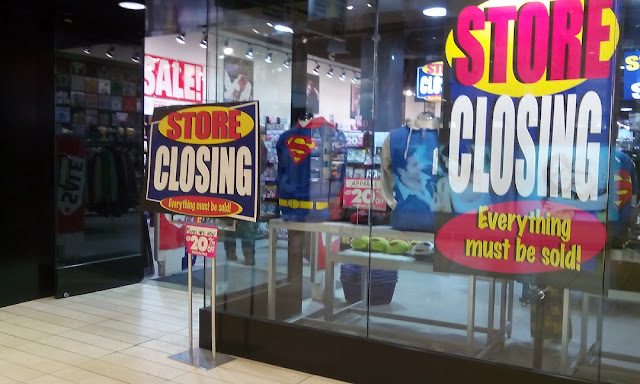 I went to an HMV store a few weeks ago and bought two Coldplay CDs: A Rush of Blood to The Head, an old one and Mylo Xloto a newer album. I had bought the first one in a case of 2 and in live format, both years ago, I don't remember when and where. One of them was all the videos of the album. It was stolen from my car in summer of 2015. In the store the guy told me that I had to renew my reward card called Pure which I had gotten probably in 2014 or so. I refused. Spending $20 on two CDs seemed extravagant for someone like me who has been out of work for over a year! The only reason I bought those two albums is the reward I had received earlier for my volunteer work.
Just a little while after I refused to pay for the renewal of Pure reward card it was announced that HMV is going out of business and they soon will close all of their stores across the country! Strange that now where do we turn to buy our favorite movies and musics!? It reminded me of a&b Sound which was a much better store than HMV and although many might not remember, was closed a few years ago. I had bought a few fantastic items from them that a number still are in my collection and a few others were stolen among others in that summer night of 2015.

Anyways I checked a store last weekend and everything was 20% off but I didn't buy anything. First because the amount of discount was low for a store which is soon closing. Secondly because fining your favorite music and films takes time. I might check them later at another location but the question remains; Why? I'm not a businessman but I wonder why these businesses struggle. They hire a number of guys and pay them almost minimum wage. They sell the music and movies of the companies which already made millions, mostly and their cost is noting but the lease they have to pay for their location. I've been to all of HMV locations in Calgary and I've purchased items from most of them but feel bad for the young fellas who work there for minimum wage and pat-time. Now they don't even have that. Just like Future Shop which was closed in 2013, I guess.
(Photo: An HMV location in Downtown Calgary. This place is always packed around noon because of all the offices around. They normally hire a number of guys for Christmas and even security guys. I've purchased a number of items from them but now they're closing)
at 22:44
Labels: Movies, Music, Shopping