Mom's Reaction to the New Challenge 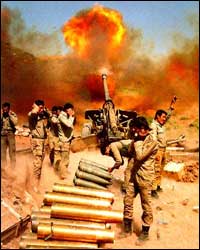 When I left home to go to CFLRS I didn't Mom and Farzin where I was going! It's just because I didn't want then to be worried. Mom's brother was in Army, of course in the old country and mainly before the so-called revolution of 1979. I don't know much about him because he died young of complications from Diabetes, I believe. I should ask Mom one day. One of Mom's younger sisters got married to an Artillery Officer through the brother. He died a few years ago in the old country of complications of Parkinson, A believe. So Mom is quiet familiar with military life. So when I told her over the phone a few weeks after I started my training, her reaction was positive and encouraging. I was taken aback how she took it! She said she knew that life had been tough for me but, she added, if I work hard, I would be settled down for life. I guess I'm going to listen to her. My Dad, on the other side, I don't know what his reaction would have been, had he been around these days but he always wanted me to become a physician. Something I always was afraid of: Blood, needles, open wound, etc! They all make me sick. I can't say that he was disappointed at me when he heard that I was going to engineering school. His only desire was that I get education and get a good job. Sure if he was around all these past years, my situation would be way different but I'm OK.
(Photo: Iranian artillery crew firing at Iraqi positions in one of many deadly days of Iran-Iraq War. I never had a chance to ask the relative of mine of his role in the war. After all he was a military man and very serious and always looked down on others. I never had the courage to step up and ask him anything. The last time I saw him, the poor man looked like a walking skeleton and could be barely heard)
at 22:25
Labels: Before Immigration, Career