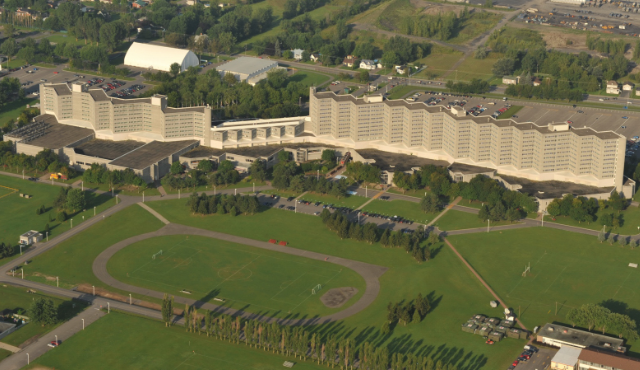 There's a big clinic in the garrison. Who thought there would be a need for that?! ... Well ... It definitely is a must in an environment where all sorts of injuries happen. However you need a variety of specialists with good experience. Unfortunately there's neither specialty, nor experience!
I first ended up going to the clinic when I had pain in my left knee and my left calve was swollen twice its normal size! I realized one afternoon but I ignored that. It must have been the result of continuous working my feet: Going up and down 5 floors few times a day, marching, running, squatting, you name it.
One day we did an intense exercise and then in the afternoon there was a march drill. I thought I should go to the clinic. I found a time that it did not interfere with any course.
After waiting for a few minutes I was examined by a physician (I assume) in uniform (I rather not disclose the rank). There I was told that I might have had a blood clot!!
I'm quite familiar with that condition. The Screamer, the fucking, disgusting, human-like animal, in the previous work, has it! He had to go for blood test every often and he had to take medications. The presumably physician prescribed me a pill (a blood thinner) and told me that I was in dire danger! He warned me not to fall(!) and ordered me to go to the local hospital the next morning and do an Ultrasound Test. That was it. The next morning I was driven to the town's hospital and as I knew it was found out that I didn't have any clot in my veins or vessels!
That kicked me back for more than probably 2 months(!) because I missed a mandatory course the morning that I was sent to the hospital and after that I was automatically sent to TRP section!
TRP is for the people who are re-coursed, meaning they have to stop their course and start it later. It's a terrible experience and makes you lazy for the time you have to go back to a platoon again but that is what it is. Generally the clinic staff are very polite, helpful and nice but not skillful and experienced as I said in the beginning. As a Master Corporal told me once and I only quote here: If you're good at what you're doing as a physician, why would you join such clinic? Unless you were the last one in your class, there would be no other reason for that!
(Photo: This areal view of the school. I'm not sure who has taken this. The clinic is seen on the lower right corner)
at 20:15
Labels: Career