A Beautiful and Lovely Snowfall 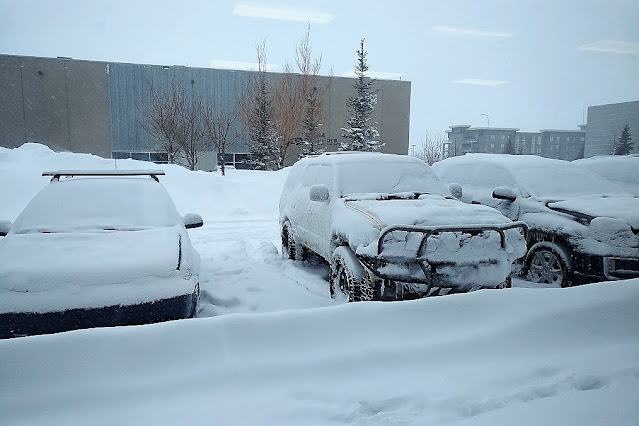 We finally got what I really wanted: A good amount of snow! I think it fell as high as 20 cm in Calgary and area and even more in other parts of southern Alberta. I had to work until 18:15 the day the snow fell and I was lucky that I could get out of my street because there was just too much snow. It actually happened with the help from an unknown neighbour! I drove just for 1 minute and got stuck and there this was this guy who was helping another neighbour whose truck(!) was stuck! We pushed it a bit but no progress led to the conclusion that he needed a tow truck. Then the fella did a few push with his snow and free I was!
When I went back in the evening and while the snow had stopped, I realized that I had to clean around the house or I will have more difficulty to get out the next day! But I was surprised to see that someone had cleaned my driveway, the part of sidewalk in front of the house and even in front of my door! Thanks! I drove to the nearby The Home Depot and bought a shovel for nearly $25 and cleaned a bit more. I was so tired then, particularly because I had worked 10 hours, that I went to the shower directly and after a meal I was hardly able to keep my eyes open. I went to bed at around 21:15!
(Photo: Cars or covered in snow in a parking lot in Calgary)
at 19:52
Labels: Vehicle related, Weather