A Japanese Treat by a Chinese! 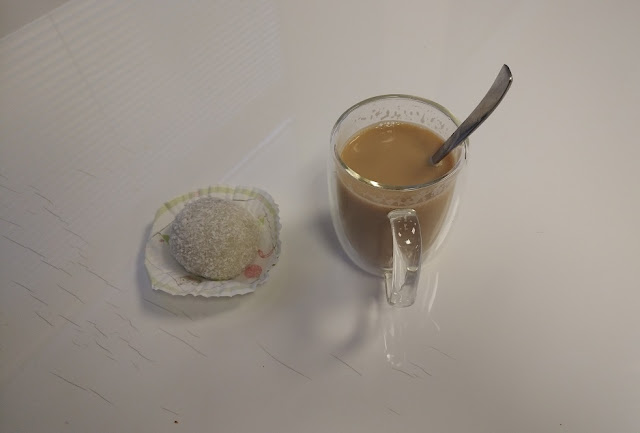 There's this treat which is very common within the people of Asian decent in my workplace and every time there's an occasion, they make it and bring some. It's called Mochi and I learnt that just today by asking from a Chinese guy. The surprising thing is he said that it was a Japanese treat, not Chinese! I couldn't believe considering the animosity between the two nations.
That aside, there's a lady who always make some and shares. A few days ago I saw a number in the break room and I enjoyed them but because the supervisor, who happens to be Chinese as well, was not there, the lady brought a few more the next day. I told her, jokingly, that I had not have any! When she was handing a box of treat to the supervisor, she told him, in their own language, to give me some! I realized that first by her pointing at me and then the supervisor said he would give some to me but I denied and he didn't insist. So I went back to work.
About an hour passed and I heard that on the radio that he was asking me to go to his office. This always is as intimidating as hell, especially the way he says that: Very calm! He doesn't ask people to go to see him unless they have done a mistake and have to respond to him. Or someone has made a complain about them. Or they have done something stupid and he has seen it on the cameras!
So I went there while breathing heavily and trying to calm myself!
There he says: Go there, pointing at the room that the employees are taken to be talked to! But I looked closer and I saw plate of Mochi!
I thanked him and said that I would take one. He told me to take a couple and I do and leave. He could've simply not told me and let the other people enjoy the treat but he did and that's why I like this supervisor. Not just for this. While generally the favours go to the Chinese but he is a fair man, most of the time and I like him for that. He is not very approachable but then that's considered his issue which we all have to deal with.
(Photo, top: I am getting ready for my break, A cup of Espresso-like coffee and a piece of Mochi)
at 15:04
Labels: Colleagues, Food, Orientals