Investing on a Relationship 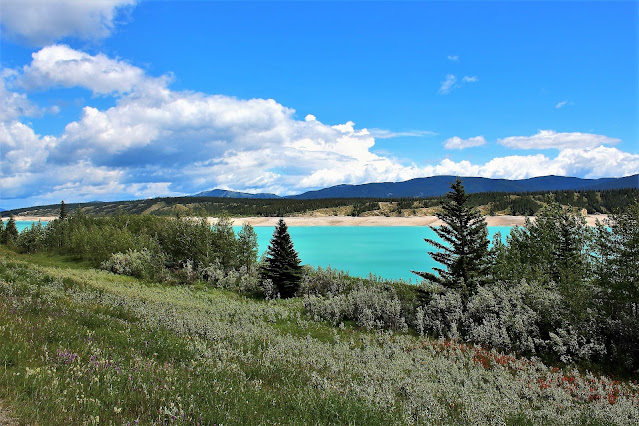 There's this beautiful knock-out Caucasian young woman working in the office who doesn't seem to be very happy, most of the time. One of the guys, earlier, shortly after I started the job told me it was because she had no partner! It could be true. I've seen her talking in a very exciting way to others and even a shouting(!), I would say. But she's incredibly beautiful. Why do I even have to describe her?! She's a petite, blue-eyed, blond, Caucasian, young woman in her, I would say, her mid. to late 30's. She has the most beautiful blue eyes that I've ever seen. Once I was in her office and she was looking at a monitor, while I was looking at her from the side. The colour of blue, that I saw, I had never seen before. Incredibly beautiful and that was because of the angle I was at, I think. Have you been to Abraham Lake in Alberta? Have you seen how beautiful the lake is? It's believed that is because of the minerals in the water. Her eyes are even more beautiful than the lake.
For a whole year I talked to her only about the work when it was only necessary and I don't know why never thought of asking her out! Caucasian and Non-Caucasian? Floor employee and office employee? Too young? All could be the reasons why I never thought of it. Add to that she having attitude and a little bit aggressive! But so what? Maybe this is how she is at work? Maybe a good relationship makes her calm? Besides what is that I would lose? The worst case scenario would be getting rejected. So with that in mind I made a nice Christmas letter and was going to give it to her on Christmas Eve. But the night before I regretted that! I thought that was not such a good idea to hand a Christmas letter! That would be seen cheap and stupid. I also had made similar letter for two other office employees at the same department and eventually through them all in the recycle bin! I thought to myself that if I was looking for a meaningful relationship then I would have to invest in it. No woman, particularly a pretty and independent woman like her would come to a cheap person who doesn't even want to pay for a Christmas Card!
Now the thing is over I think I can by a nice gift or a card and prepare a letter claiming that it was delayed due to the recent storm and give it to her! What do you think?
(Photo: Abraham Lake in Alberta next to Highway # 11. I took this photo in summer of 2016. You see the difference between the blue colour of the sky and blue of the lake. The lake is much more attractive. Her eyes are way more beautiful than this!)
at 18:55
Labels: Western Culture