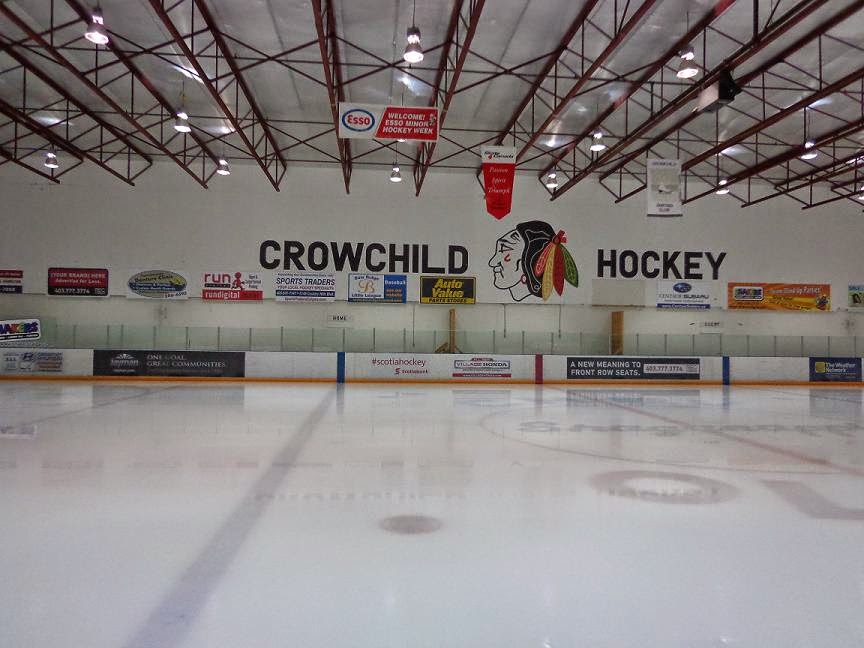 We attended the last session of Ice Skating at U of C last week. Overall it was a much better experience compare to two years ago when I first did this course. Although the previous instructor helped me to stay on my feet and learn the basics but she was not as caring, friendly and helpful as the one this year.
We were told that there was another place that we could try to practice and that's how we came to know about the Crowchild Twin Arena, where we spent over an hour yesterday. We arrived a few minutes early to gear up and similar to most places in Canada it didn't seem to be any control. We paid a Townie for the two of us and entered. It was a well-maintained ice. People gradually came and it got busy and busier by minute but it was OK. Lots of Chinese were there and apparently it's close to one of the neighborhoods they accumulate themselves, many kids and to be quite honest I was impressed by the way some of this China people were maneuvering!
Everything was going really well and we had so much fun. We practiced bubbles, backward, crossover, Hockey stop, as well as regular forward skating. Then I was gliding by The Lady and we were supposed to skate a few last minutes of the term when I asked her to do that fast while I was looking at her on my left side. For some reason I lost the control and she says a kid appeared before me and kind of went backward and to the air, got a height of, if I'm not exaggerating, almost 2 feet and then Boom! hit the ice with ass! I was embarrassed especially because a Caucasian guy caught me falling hard beside I had been maneuvering and going between people without a small issue but I pretended nothing had happened and stood up and continued sliding! Those ones who do skating regularly and has started when they were 3 or younger, like many small Caucasians in the arena, know it was a bad landing and know how painful it is. The Chinese might not know. So we finished and got back to the car with not much problem. The Lady wanted to by a vase of Hyacinth for the upcoming Norooz so we stopped at a Safeway on our way home. When was trying to shut the trunk after getting shopping bags I realized that I had left the damn key in the ignition! Damn!
That was the second sign that I was tired. I lose concentration and focus when I'm tired and that was why I fell. Now by forgetting the damn key I had to go home to get The Lady's! I was supper lucky that I had both the apartment key and my wallet. Otherwise We would have to call the building manager! So I told The Lady to keep herself busy while I'm taking a bus to home. Unfortunately I was not as lucky as I originally had thought! I had only a credit card with no cash, no debit and ticket for bus and that credit card was the one I had had problem with for a long time! I kept being declined at the time of shopping!
So I said I would walk home, get the car key and some cash or another credit card and would go back to the supermarket. I wasted a few minutes finding The Lady in the mall ti get the other credit card from her but she was nowhere to be found. Considering all the time wasted I decided to catch a cab while I was almost 1/3 of the way home and ask him to wait for me and take me back to Safeway. That stupid mistake eventually cost me $17.7 and almost 1.5 hour.
I barely slept last night and was immobilized the entire day. I'm hardly at my desk and just waiting for the dark to shadow the city so I can go to sleep maybe after a few hours. Regardless of all the above it was a fun day and we're definitely going next week!
(Photo: The rink that public skating is usually held at and that is the northern rink, not that this is how they are specified, before the skaters hit the ice. I wonder what the giant Chicago Blackhawks is doing on the wall!?)
at 19:23
Labels: Exercise