Showing posts from January, 2006
Show All

The Jewel of Memorial

I, time to time, watch the National on CBC and tonight I turned it on and what I saw and heard made me so agitated, nervous and also disappointed. It's the story about an East Indian (again f**king East Indian s!) researcher in Memorial University of New Foundland in St. John's and his fraudulent studies and publishes: Dr. Ranjit Kumar Chandra . This is the abstract of what I saw in the first part: Newfoundland is one of Canada ’s Atlantic provinces which considers also the poorest province of the country. It’s also the last province which joined the confederation in 1949, considering that Ontario , Quebec , New Brunswick and Nova Scotia joined together in 1867 to create the new country of Canada . So it was 82 years after confederation when Newfoundland joined the other provinces. Nunavut was part of Northwest Territories and then got separated and appeared as the last province/territory in 1999. Now some of them claim independence, including Quebec which lo
3 comments
Read more

Federal election was last Mon. and the following is amongst the main results but before I get to that I should say that the way the Prime Minister goes to power is different from the way a President is elected in a country. This is how it works: There are different political parties in the country and each of them have representatives in different cities. People vote for their favorite rep. in their area and the one how gets most number of votes, goes to the House of Commons and the leader of the party with most seats in the House becomes the Prime Minister. Now the results: Conservative Party took over Liberal s. They got 124 seats compare to 103 has taken by Liberal s. As a result of that Paul Martin is not the Prime Minister any more. Stephan Harper , Originally from Calgary becomes the Prime Minister as he's the Conservative 's leader. Martin resigns as the leader of Liberal s. Bush called Harper and congratulated him. Harper is a great American suppoter.
1 comment
Read more

- January 21, 2006
I and P. M. were going to his favorite bar after being refused from Tequila because the tickets he got was only valid until 10:30 PM and when we were there it was almost 11:00 PM, and he said: Let's have an slice of a pizza. There's a pizza shop in 17th Ave. SW and that's where pizza is sold by slices and is a gathering places for Canadian guys and gals before or after they get to a bar or a club. I haven't tried that but looks it's good. $3.99 for each slice and of course you can buy a beverage too. P. M. got an slice and I asked the beautiful young girl if they sold anything for low-income people?! She answered: No! Then the girl told me if I was a low-income person I should have voted for NDP . I said that whoever I vote for (I didn't tell her that I'm not eligible yet) I won't vote for Conservative and Bloc is out of the picture. Fortunately we have the same idea and confirmed both of my comments. And we started talking about politics and i
Post a Comment
Read more

- January 19, 2006
If I call me the unluckiest guy in the world, I'm not bullshitting, specially if I'm talking about careers. I lady from Standen's a company which is only about 15 min. drive from home call me last week regarding the position I applied last Dec. as a QA Technician. I called her back a few times and as I couldn't find him on the phone decided to go to the firm and talk to her. She mentioned in the message that they are in need of another position in QA department and she would like to discuss that with me. When I got there and waited for a few min., she came out of the office and oh my God! she was with a motherfucker stinky fucking Indian man who was my classmate in a few courses back in SAIT days! And that motherfucker started interviewing me and shit, I screwed up again because I was not ready at all! But I also should mentione the way that asshole interviewed me: A complete nonsense one! He just followed what I wrote in there, word to word and that assholes didn
Post a Comment
Read more

- January 14, 2006
There's an Armenian guy in the plant who's a very nice guy and helpful. He is married to a chubby Canadian gal. They used to be together for a long time and on that time Levi used to say that he screws her every morning! He's a very strong guy in his early 40s and if he was not, he wouldn't be able to satisfy that chubby chick who's at least 250 lb. ! (How did I find her weight? I don't know!) But after a few year (3 years he says) they got married! I'm sure no one would marry that girl but there was a chance for Levi to find someone thinner for him but he chose her. Besides she's young, prob. 25. I can't tell because it's really hard to say how old Canadian people are. I once told Levi that we should celebrate his wedding and last night he took me and Laszlo , the Hungarian guy, to a nice bar in High River . I didn't know that I can see a bar like that in a small town. Same good beer, live music, pretty girls, everything. Of course
Post a Comment
Read more

Election campaign has been started as a result of fall of the minority government in the last days of 2005. I'm not eligible to vote yet but tried to understand what the four major parties' plans are but didn't get much! The leaders of the parties have confronted each other two times so far. The last one was tonight in Montreal and it was in French . Martin of Liberal , Harper of Conservative , Layton of NDP and Gilles Duceppe of Block Quebec debated over issues of the country, their plans and promises. I also saw a very interesting TV advertisement against Harper which I guess destroy him partially. In the ad. Harper is accused of the following: Supporting Americans in war on Iraq and demanding Canada to join them. Denying gun rigestry which leads to more violance in the cities, like the one happened in Toronto in last Boxing Day. Insulting Atlantic Canadians . ... The National pointed to the ad. too. It's said that it's an American s
Post a Comment
Read more I was driving last night to gym and was listening to the radio. There's usually a very interesting radio show in the evenings. They were talking about the crimes and gangs. The last shocking one resulted in death of a  15-year-old girl in Toronto in Boxing Day . The man on radio asked the host about the of justice system of Canada regarding criminals. He answered that they are planned to be released as soon as possible! They usually spend two third of their time and are out. The woman responded as: Why don't we raise enough money to keep them in, then?! We raise so much money for tsunami disaster in Asia , last year, that officials say it takes at least 10 years to spend all of it! I don't remember exactly how much it was but that was a lot. Gangs and street violence is another problem in big cities of Canada specially Toronto , Vancouver and also Calgary . (Photo: The 15-year-old innocent girl of Toronto who got killed during a shoot out in boxing day)
Post a Comment
Read more

I received an appreciation letter from Canadian Blood Services as a result of my donation in the last days of Dec. '05. It's indicated that my blood type is special and approximately %9 of Canadians are Type B. So they rely on regular donation from people like me. I'm happy that I did something positive with my life stream and the letter is very encouraging but I really am afraid of needles! Besides that blood donation process prevents you from some of your regular activities. For example you can't go to gym and work out. But I may donate again. Not sure yet. They also sent me a beautiful card which I signed on the back and carry it in my wallet. It's all pleasing to me. I mean good food, good work out, movies, nice and quiet city and the new cute friend of mine whom I was talking to for 95 min. and 25 Sec. (!) on the phone last night and she said so many sweet things to me and forwarded her photos. The only damn problem I got here is my job. I have tried hard
Post a Comment
Read more 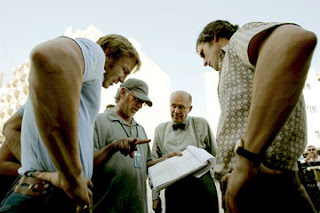 Yesterday was my birthday and the Cutie called me to say happy birthday and also talked about everything specially the love she lost! We talked for 94 min. and 35 Sec. ! God helps me with the coming mobile bill! She says so sweet things to and looks like she really likes me! Worlds like handsome, sweetie and so on! She wants me to go to Vancouver (that's where she lives with her family) and wished me I have my next birthday party in there! Also asked me to move to Vancouver ! I really don't know why she says so. But I know she is in need of someone to love her. Renay used to say the same shit almost when she started talking to me, a little milder but nothing happened and almost a year ago we broke up forever. Then in the evening I watched Munich in Chinook's Famous Players . That's a fantastic movie. Brilliant and that's not because of the cinematography, performance or anything like that. The movie has a very wise and impartial message. Spielberg did a great
3 comments
Read more

He is Needed Here!

Saddam 's trial is in process regardless of all the related violence. One of his lawyer got shot once but the murderer plays smart! He says he doesn't recognizes the trial as a fair one! One of the top US attorneys once attended his trial to defend him! He also wants to be shot by a firing squad instead of being hung! His brutality against Iranian troops, using chemical weapons in the eight-year Iran-Iraq War has never disputed in the trial so far! We needed another Khalkhali here! He would have been hung or dead in any other way long time ago, If Khalkhali had been the judge! The said person sentenced many ex- Shah 's loyalists including the Prime Minister Hoveyda in the early years of 1979 Islamic Revolution to death with no trial, most of the time! (Photo: A cartoon displays Saddam's complain about his trial!)
Post a Comment
Read more

- January 01, 2006
It's officially Jan. the first now as it's 12:35 AM. New Year's Eve was as wasteful and ugly as most of the other days! The year 2005 which was finished a few min. ago was the year of lost opportunities for me. So many of them, both is profession and social life. I could have got the career that would change my life forever and could have the companion who might be the greatest one that someone ever wishes to have but never happened. Going back to school or home are the only choices I got, If I can't find a good career in the first 6 months of 2006. Sometimes I feel so bored and sometimes alright. Also It's a bit frightening that I'm so used to living alone! I wonder if I can stand anyone beside me! At least I think it takes a long time to get accustomed to a married life!
1 comment
Read more
More posts