Showing posts from May, 2010
Show All 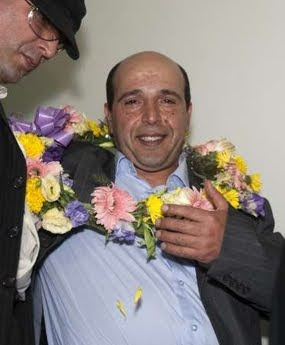 I've written about this bullshit term that Westerners use to legalize whatever they're doing; it's called democracy(!) French politicians are the biggest liars ever and the most frequent users of this term. A former PM of Iran was assassinated by a small group of people in France in 1990s . That was the second attempt and the successful one. Regardless of who the person was and if he was a servant to his country or a traitor, their action was considered of course an act of crime, they got arrested, tried and sentenced. One of them, Ali Vakili Rad was sentenced to life in prison. The democracy-oriented people of the French Government released the guy just after 18 years in exchange of one of their spies, a French woman! Where did justice go? Where did democracy go? Shame on you liars. Shame on you Westerner s who use different terms in a way you mean it not in the way it really means. (Photo: Ali Vakili Rad, the assassin who killed Shapour Bakhtiar, the last Pr
Post a Comment
Read more

- May 21, 2010
I had the interview for that position yesterday. That seemed a bit strange interview to me as I had never had like that before. There were 4 people , 2 employee and I'm supposed to be their colleague if I'm hired(!), one possibly from HR and the other one from another office, presumably the one that I'm goin' to work in. The interview for the part-time job took about 35 to 40 minutes. I think I had good answers and bad answers but they sounded very unprofessional to me. One question they asked and I had that before was how would have my supervisor described me, if he had been asked about me. For that I'm goin' to actually write what my supervisor wrote to the head office in response to their check on me: He is a dedicated individual who does not need to be reminded of our expectations. Quick learner, enthusiastic and very reliable in his attendance . I only mentioned the last one. I was told that they would let me know about the results by the end of the next w
Post a Comment
Read more 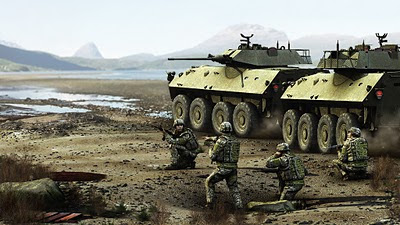 I decided to buy a PC game, a First-Person Shooter right after I bought a new PC but was sure that I can't have something really advanced. So I checked a BestBuy and there was this game Operation Flashpoint: Dragon Rising which reminded me the old version of it. I played the old version on the new PC but then said to me that I should get a better one, more real one. I compared that to the older version of Call of Duty ( $19 versus $39 ) and finally picked it. The picture and sound quality is very good but when I wanted to try different Single Missions, I realized that they were all locked by one! I contacted the customer service and I was told that the Single Missions get unlock through the Combat Mission! I tried the combat mission a few times but it's really hard to go through especially because here you are the platoon's or whatever small group it is, leader. (Photo: The graphic and quality of image is supposed to be as clear as the above photo but I haven't gon
Post a Comment
Read more 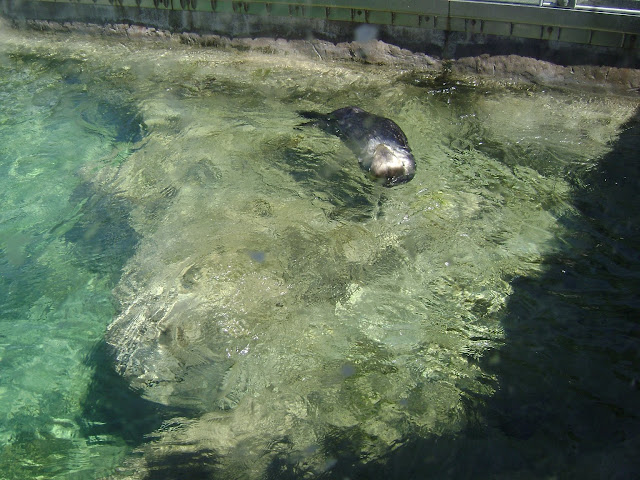 We finally paid a visit to Vancouver Aquarium yesterday, starting form 11:00 something. I was not very impressed. Was good though. Saw lots of things that probably can't be seen anywhere else. I don't get impressed actually these days anymore. Mostly kids and elderly people were browsing. The funny thing is we had to pay $22 each plus a $10 for parking and they still were asking for donation! I believe that it's very expensive to keep the aquarium up and running but they mostly use young guys and volunteers and they probably receive government funds as well. They can simply include that donation in to cost of the tickets. They don't have to humiliate people. Or if they really think that the Aquarium is not profitable they can let all the animals go. They shouldn't be worried about donation and everything else then. That's bad management. You consider a family of four probably spends $100 to $150 at least in a visit which is not bad and although it was
Post a Comment
Read more

- May 14, 2010
This post is completely in contrary with the previous one. I'm a bit more optimist now. I received a telephone call from a lady in the HR department of a municipality of a major cities of Brit"SHIT" Columbia inviting me to an interview in a few days. The interview will be performed by a group of four people, she said. That wouldn't be a tough one for me as the job description matches exactly what I'm doin' at my current job but working for a major municipality, a panel interview, the other candidates and some other issues scare me a bit. I have to deliver my best performance to get this position which is a sort of part-time job but pays good.
Post a Comment
Read more

Over And Over Again

- May 13, 2010
Have you heard that song Over And Over Again ? Well that's the story of my life: Screwed over and over again over job applications! I applied for a position with this motherfucker, animal rednecks in fucking filthy Brit"SHIT" Columbia in Apr. of 2009 , more than a year ago and sent them all the fucking documents they wanted, several times through registered mail and spent lots of money. Eventually after one whole year this piece of crap requested the same documents plus a bunch more. So I sent them to him/her again and told him/her the rest were on the way because they should be evaluated. So just one day after I filled out the fucking forms, signed for over $200 charge and sent it to the assholes, I received a letter from the Recruiting Manager stating that he had found other candidate better qualified than me and I was no longer considered a potential employee! I was goin' to e-mail that motherfucker file manager of mine, the bulldog to ask him what was goi
Post a Comment
Read more 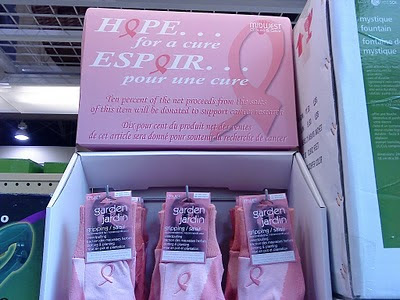 I was at a Superstore for a little shopping when I came across with this pink pairs of socking hanging out of a shelf labeled " Hope for a Cure ". I was about to laugh! I don't know how long these guys are goin ' to keep this story but I believe it will be on for a long time. They spend billions of spaceships and space stations, on submarines and fighter jets but need donation for cancer cure research! Many people believe that the cure actually has been found but the pharmaceuticals just don't want to let the people know because they simply will go out of business. It's like just a few months ago when this stupid Swine Flu kicked in. They first said that there are limited vaccine available for people and the priority was given to kids, elderly and moms. Then there were too much left and nobody wanted it so they started their stupid TV ads on different channels. As long as people are asleep while living and stupid enough to be brainwashed by whatever shit t
Post a Comment
Read more 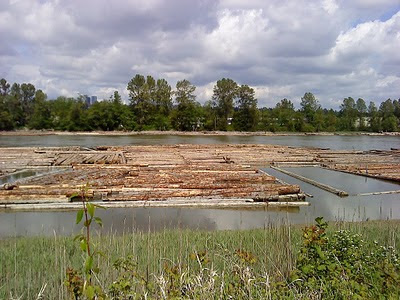 I was driving to Vancouver this afternoon on Highway 99 or 91 (not even sure on which one I was driving!) and just shortly before turning to Knight St. I took the wrong exit and boom! I got lost again! I was driving on a rood which I think it was alongside Fraser River. It was a narrow road, one lane each side with all industries around and speed limits at times down to 30 km/h because of all the 18-wheelers and truck commuting. I was driving east and then I said to: Damn I'm goin' back to where I came from because I was supposed to be drivin' to west, to Vancouver . So I pulled in someone's driveway and turned back. I was goin' back and was a bit speeding when I noticed a Chrysler coming toward me and I thought at the time and I still think it could be a Ghost ! He turned his hidden lights on for a second and I said: That's it and I stopped right in the middle of the road and looked into the rear view mirror. He was trying to say something by waving at me
Post a Comment
Read more

Heed Is Not Healed! 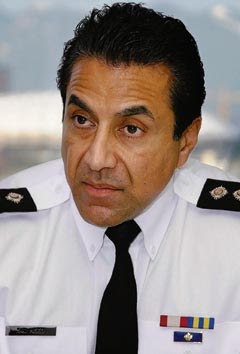 This story of Kash (not Cash!) Heed is really funny. An East Indian and a Punjabi Sikh , who was a member of VPD was working hard to be the cheif of police on that force. He lost to the guy from Hong Kong , Chu . Then he was appointed chief of police for WVPD and resigned after a short time, stated that younger officers should be given the opportunity to run the force in that jurisdiction. Then he was appointed Solicitor General for the Government of Brit"SHIT" Columbia . He was found in the middle of scandal and resigned. You should have seen the Punjabi guys with big smiles on their faces jumping up and down in front of TV cameras after he was cleared of all charges. He was reassigned to the job yesterday. I was walking in a Save on Foods this morning and saw all the morning papers with his photo on front page saying that he was back. Got in to the car, started driving and turned the radio on. Heard that the accusations are back and he had resigned again! It
Post a Comment
Read more

Good News or Start of a Challenge

- May 05, 2010
I just received an e-mail confirmation, a long one with all information and forms attached, from a recruiter indicating that I will have the chance to join this police force. I just had a quick review and good God, it is a real challenge. Not to say that I am afraid or anything but it is a life time opportunity and if I miss it, it probably will never turns on. The selection process includes: 1- A 4 to 5 hour exam. 2- A 1 hour interview. 3- A 3 hour psychological test. 5- A physical readiness test. 6- A 4 to 5 hour polygraph exam. All will be done only and only if I pass the previous one and I have to travel to another province for those. So better get ready and plan for everything starting now!
Post a Comment
Read more
More posts