Showing posts from February, 2015
Show All

My Memories of Mr. Spock 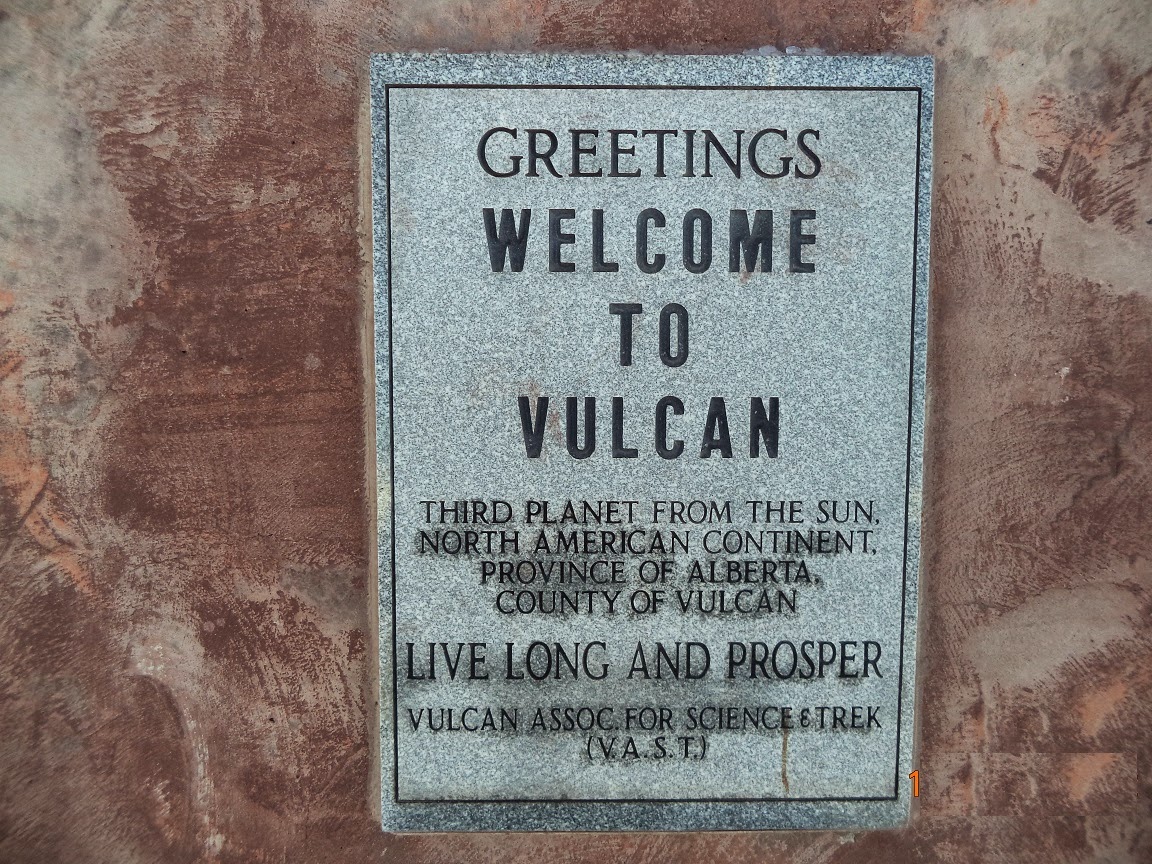 It was many years ago I was in Grade 1 or preschool, perhaps. That's why I do not remember clearly. We used to play in the beautiful garden yards of Farhad School and I recall kids calling each other on their imaginary radio: Kirk, from Spoke! Kirk from Spoke! Can you here me? This was of course before the Islamic Diarrhea Revolution and I barely remember the series but clearly remember its lovely soundtrack and scenes with William Shatner , Leonard Nimoy , DeForest Kelly as the doctor, the Black woman, Nichelle Nicols but don't remember any story as I was very little.  Yes. Star Trek used to be shown in the old country under the title of The Pioneers of Space ! Was it as popular as it was in North America ? I have no idea. I might talk to Mom about that but I know they were not into TV very much. I remember though that there was a channel called International Channel where we used to see mostly American cartoons, series or movies but again I vaguely remember th
Post a Comment
Read more

Roll Up the Rim to Win 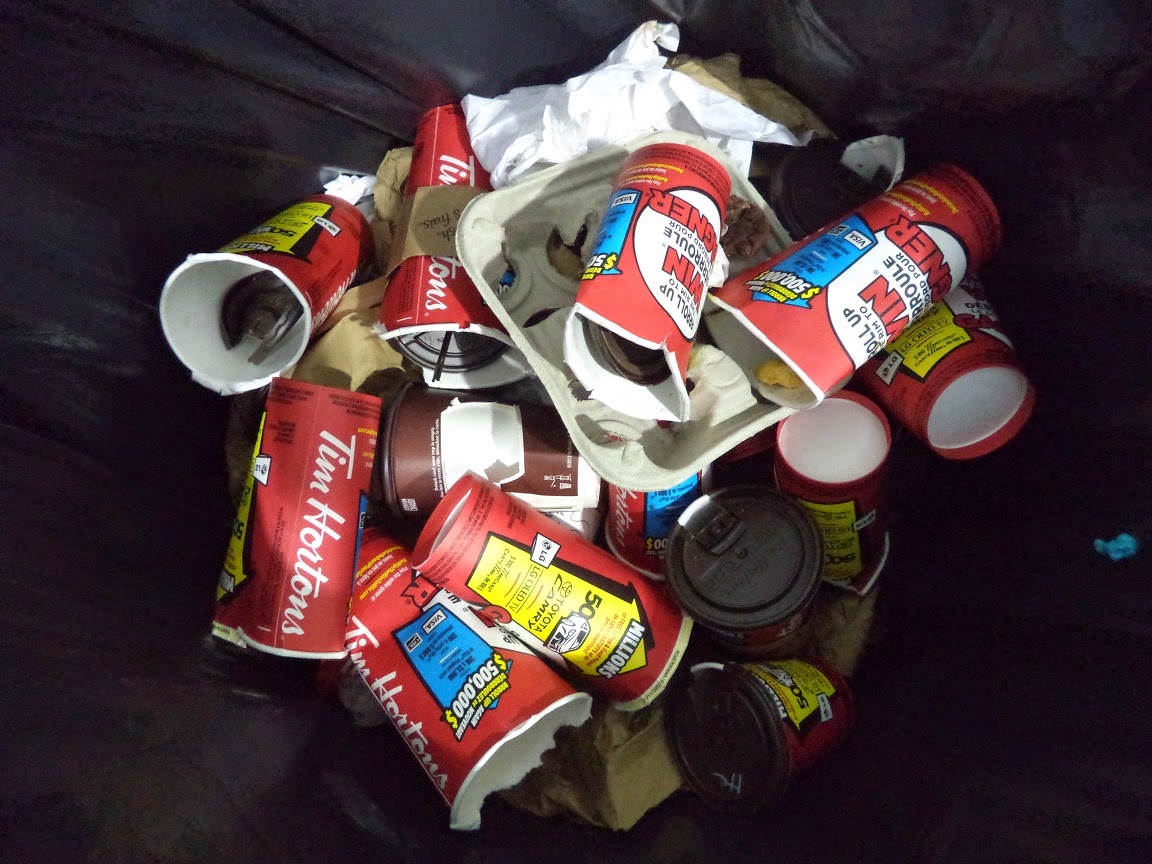 Tim Horton 's has this Roll Up the Rim to Win contest every year for a few weeks. I have never taken it seriously because first of all I'm not a Tim Horton 's fan and second of all I hate gambling. Nevertheless I have won a few doughnuts and such in the past and this year too. I have tried twice only this year and that because of the introduction of their new coffee, the Dark Roast .  The amount of crushed paper cups normally increases during this contest's period. Apparently people buy the coffee with the hope of wining something big and get nothing and through the damn cup away! But Tim Horton 's coffee shops are normally crowded so I don't know what the frustration is about. You normally pay for the breakfast and now you have a chance to win something and you're upset because you didn't win?! Grow up!  (Photo: A garbage can in Crowchild Twin Arenas where we go normally on Sun., afternoons for skating. This is alway fun and it was today as wel
Post a Comment
Read more 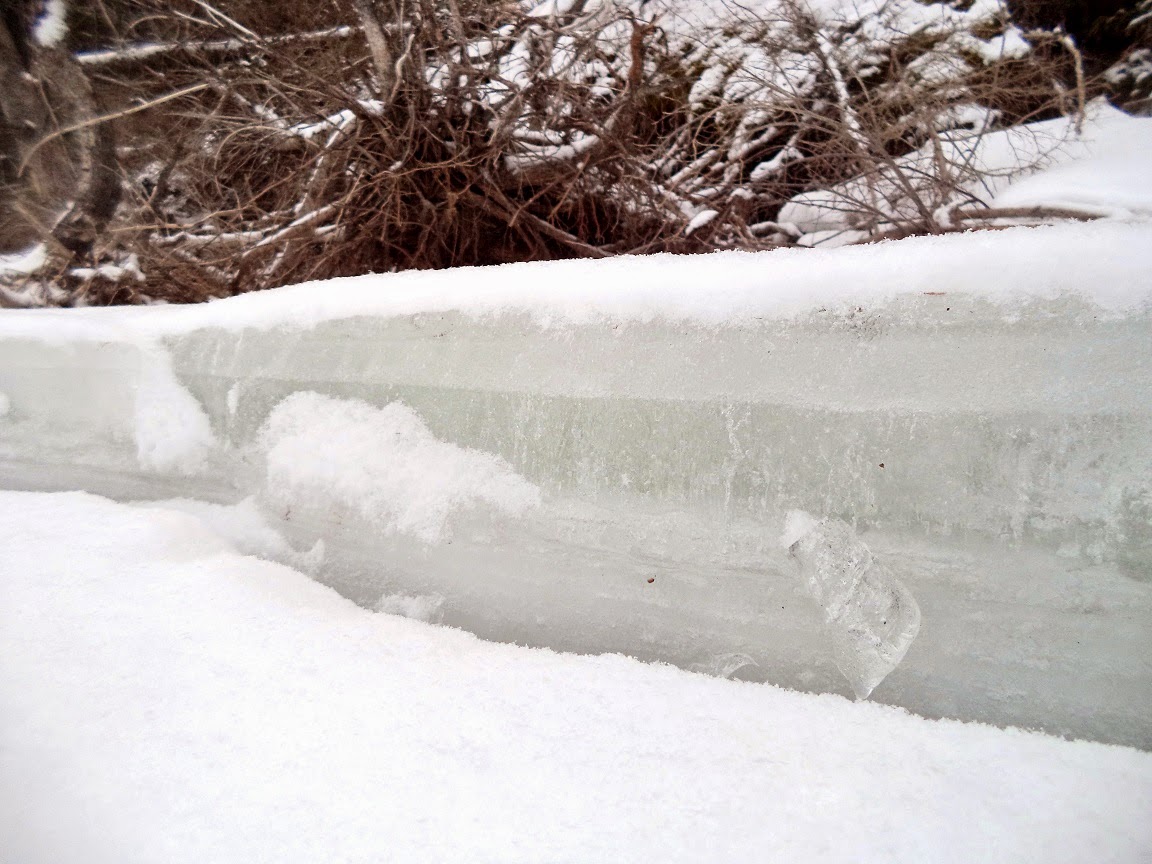 I had planned to go to Kananaskis for a short hike this weekend but when I woke up in the morning and checked the weather, I learnt there had been a snowfall warning for the region which warns of up to 15 cm of the snow. So I decided to cancel the trip.  I went to Bowness Park instead and did a little walk towards the west side of the park where this Valley Ridge Gold Course is located. That was not a very impressive walk but at least I checked out a neighbourhood that I had not been to before.  This look like a bear footprint to me but I could be wrong. Any idea? Maybe a wolf, fox or coyottee?!  This is a set of four slightly impressions and you would find the next a meter ahead of this. Rabbit?  Obviously a bird and a confused one! A magpie maybe as there are plenty of them in Calgary Bow River Pathway in facts ends there and instead of the usual sign you see this Calgary Pathways sign and you hit the golf course. I crossed to the course and of course there w
Post a Comment
Read more 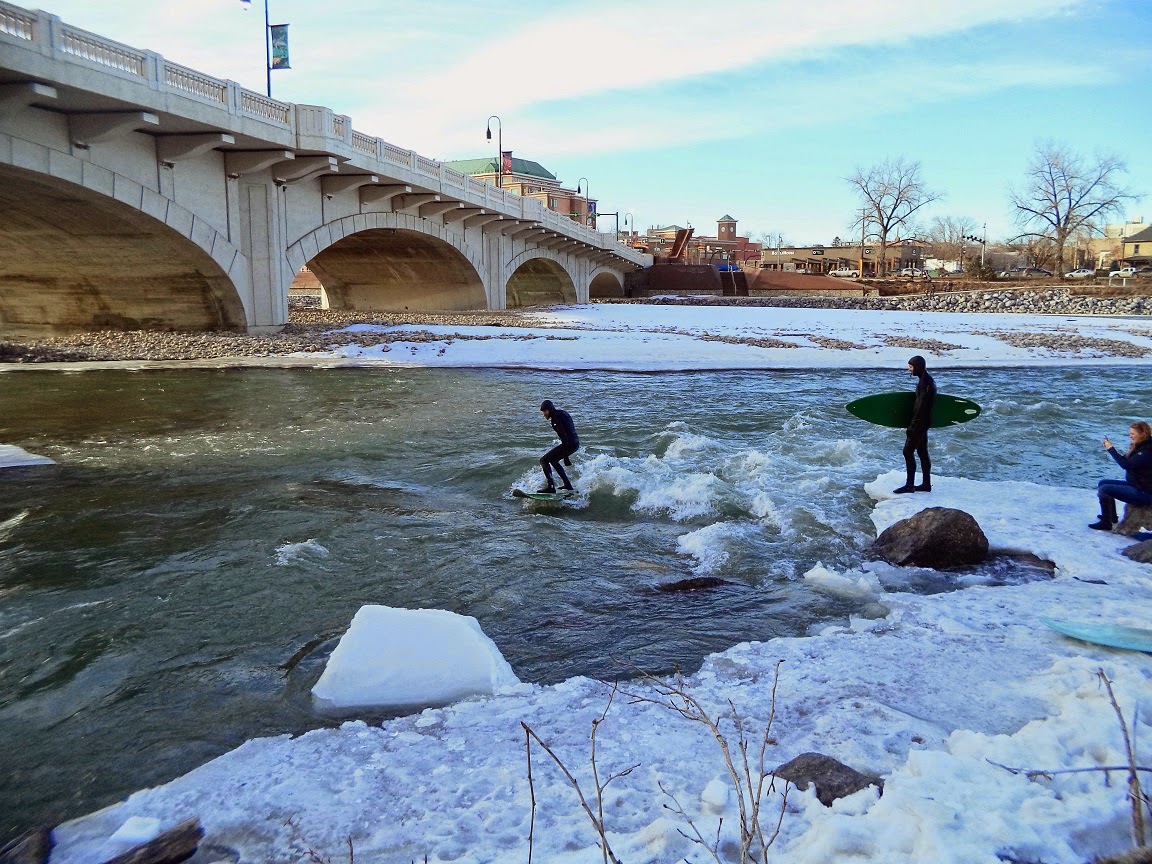 Can you imagine you can practice surfing in Calgary , even in winter?! You don't have to travel to Caribbean or Australia . The fact is it has not been a serious winter so far.  I was on  Bow River Pathway  last week for a walk and saw these two guys by  10th St. Bridge . In fact I had seen people at the same spot a few month ago but that was  July  or  Aug.  but the warm winter has encouraged people to do this activity in the ice cold waters of   Bow River.  Some don't even dare touch the water! (Photo: This is the moment that the surfer is able to stand on his feet on the board. You can see a giant slab of ice in front of the scene. This was just shortly after 16:00 hours)
Post a Comment
Read more

Family Day at the Olympic Oval 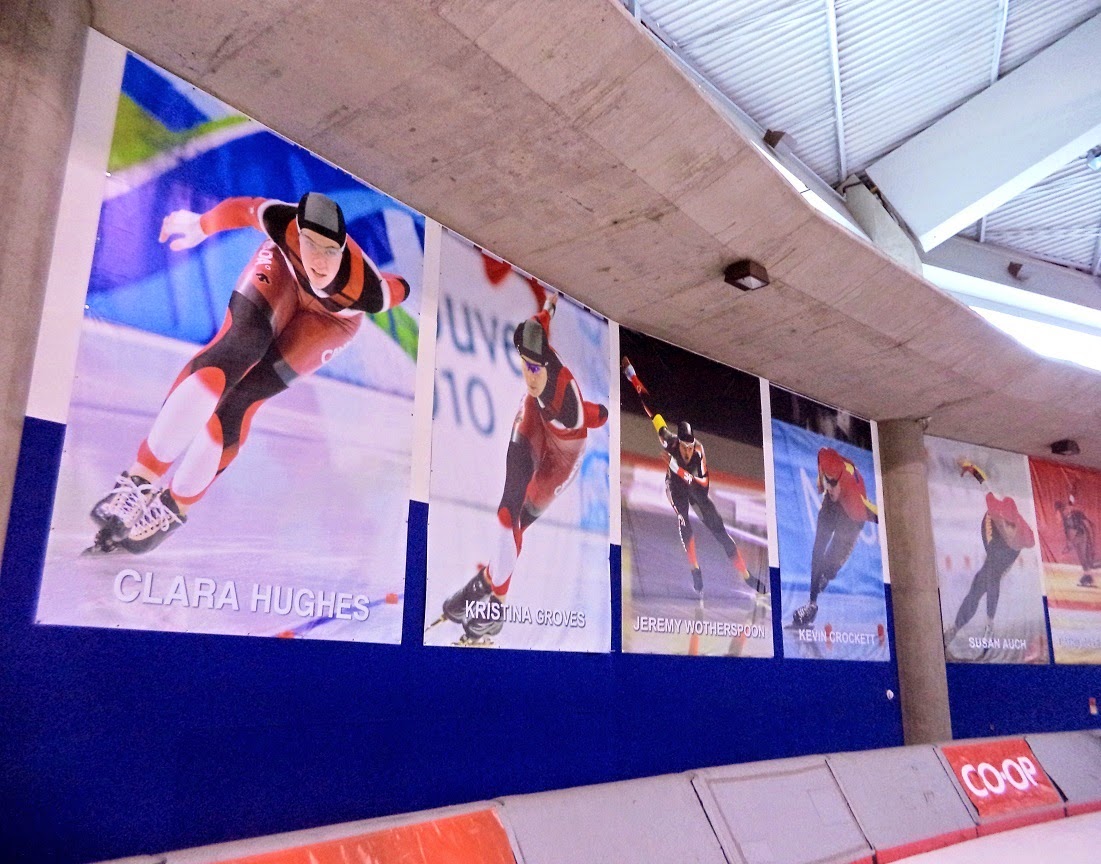 We have started a new Skating course more than a months ago and although we both like our previous course's instructor, we are enjoying this course as well. This year the Oval is a bit busier which is both good and bad. It's good for the business but at times it get's very crowded but has not affected our practice and learning very much. A huge crowed was at the Oval today but the majority of them were spectators, mostly family members who were there for Pizza and Pop by Papa John's and a big number of beginners who just wanted to post their photo in skating gear to their Facebook page!  We realized that free skating would be held this Family Day at the Oval when we attended our class last week so we went there today. We were there at about 12:30 and that's the time we started and apart from a few breaks we were active until almost 15:00. There was a 15 minutes break for everyone to let the Zamboni s ran on the tracks. It was a busy they there were l
Post a Comment
Read more

- February 10, 2015
Christmas and New Year is usually a good time of the year for trip if you have planned well ahead. I'm not talking about lazy sunbathing or such idiotic vacations. There are other place in the world that you can go and enjoy there weather and sightseeing while it's all frozen up here. I've never had that chance though during all these years I lived in Canada .  For years I was a slave in High River and then got out and became a servant of A. J. for little over a year. That was when I even bought my ticket to go to Boston to see my friend but he forbid me too! I was an idiot to listen to him! Then I became broke and struggled even for my daily expenses! And now after a few years of break, which I never used any opportunity, I'm about to go back to the same shit situation I was with the economy going down such as a fast elevator!  This passed Christmas and New Year I had a total of 12 days off, I guess, or something like that but was stuck here. There's a
Post a Comment
Read more

Finished Reading No one Ages in Magadan 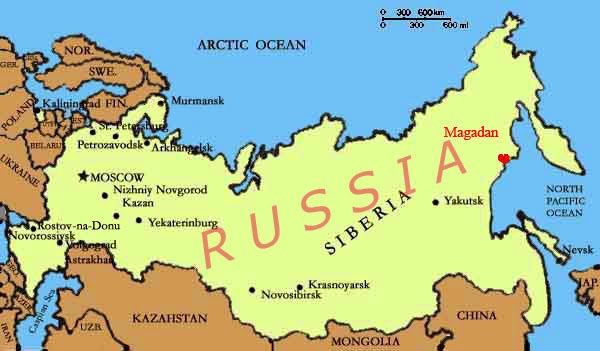 I finally finished this memoir by late Dr. Ata Safavi , called No one Ages in Magadan and the reason why I finished it fast, of course, was because the book is in Persian . Before going to any detail I should say that I am completely disappointed both at the guy who is claimed to be the author and the late doctor. I give the book 1.5 out of 5 stars. I have written about the book previously but it was before I read it and based on the available videos on the web. I need to point briefly here that Ata Safavi was a supporter or member of Tudeh Party of Iran , a pro- Soviet party in the country which was active before the WWII days to mid 80's, during the WWII days in northern province of Mazandaran , Iran who intended to immigrate to the former Soviet Union with the hope that he could help his own people to come out from poverty and misery that the ruler of the country had imposed on them for years ( Pahlavi Dynasty, the first King). They travel to the most northern
Post a Comment
Read more 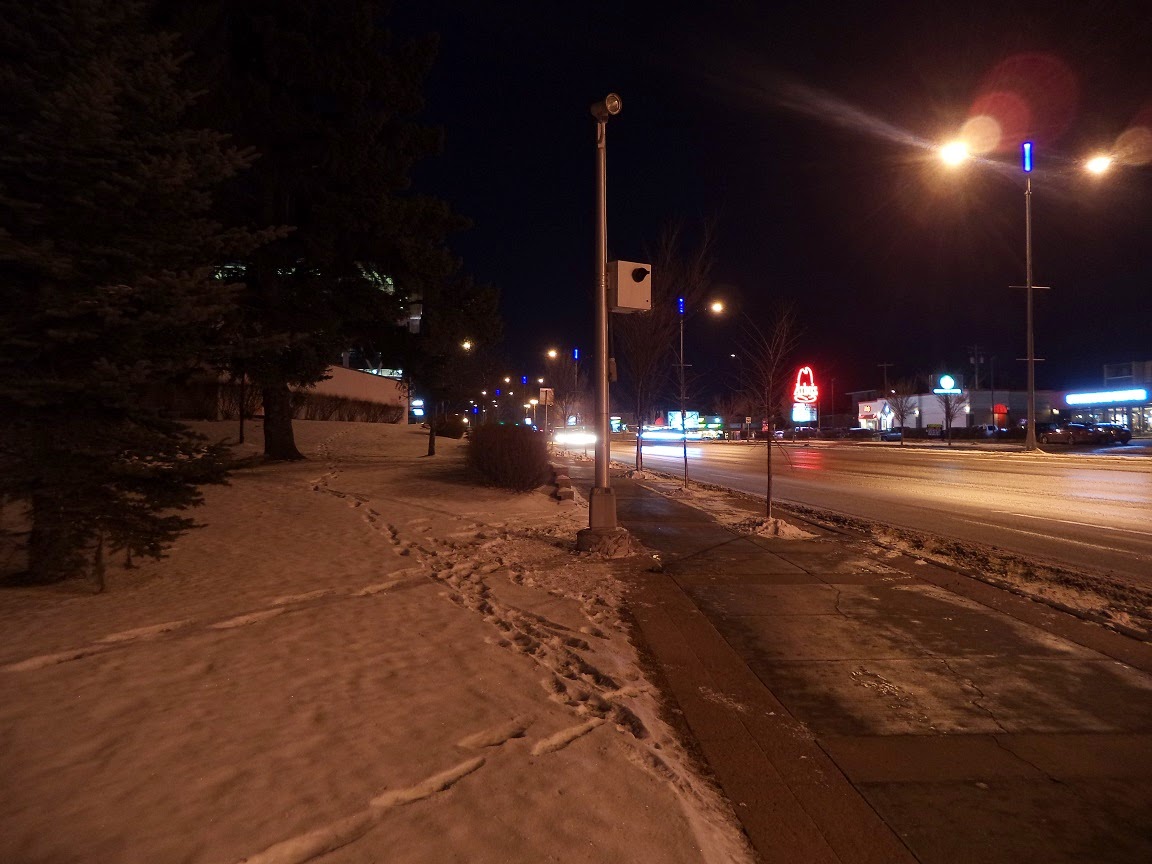 The other night was waiting at the light and saw a car driving very fast and passed the intersection. As soon as he crossed the pedestrian crossing two huge flashes illuminated the whole area! I immediately realized that the installed camera at the intersection had detected the speed and taken a photograph. The stupid driver realized the same because I saw its brake lights blinked but that was too late! He would receive a ticket at home soon!  Regardless of the above, there are many speeders in the city and it's very surprising that CPS cannot so much, even in Downtown that their presence is not bad. Is is lack of crew or something else. I know a camera such as that must be expensive but in long term it will pay itself off!  (Photo: A speed camera installed at a busy intersection. The one that I witnessed operating is not even half of this buy but people mostly speed on that road because it's one way with not many intersections and is steep. So people are tempt to spee
Post a Comment
Read more 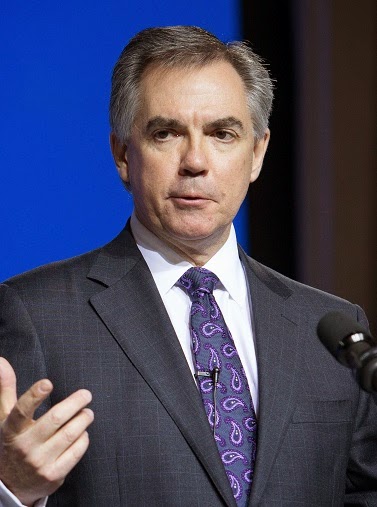 It was announced last week that the Primer of Alberta , Jim Prentice has suggested a percentage cut of the Government employee so it be a bit of help to the economy. While I see nothing wrong with, some miserable whining guys started telling that's a gesture which would not help! The total saving is some $600,000 which I don't think it's bad. I really don't understand what is wrong with some that they think they should criticise everything and oppose to almost anything. The new Primer started his job late last year after the dishonest woman, Redford resigned.  I believe if everyone in the province could save somehow, for example drink less fucking alcohol, smokes less cigarette and weed or walk a bit more instead of driving even if they want to go to the next street's supermarket, part of the problem, would be automatically resolved but you can't expect these from a society which greed, over-consuming and individualism are values! (Photo: Jim Prentice
Post a Comment
Read more

- February 02, 2015
I regularly check APEGA website to see what's new although I've lost all my faith in the organization after seeing so many incompetent so-called Professional Engineer s!  There was just this announcement that the new applicants of the title now need to provide a proof of proficiency in English language. Applicants only needed to submit a hand-written letter to APEGA and that's what I helped Newlywed with! He hasn't gotten his title yet. He's a true ass and even if he gets that, it wouldn't change anything.  It's stated that the individuals need to submit a TOEFL or IETLS result. This for sure is not enough but it's a good beginning step.
Post a Comment
Read more

All the Elbow River Parks 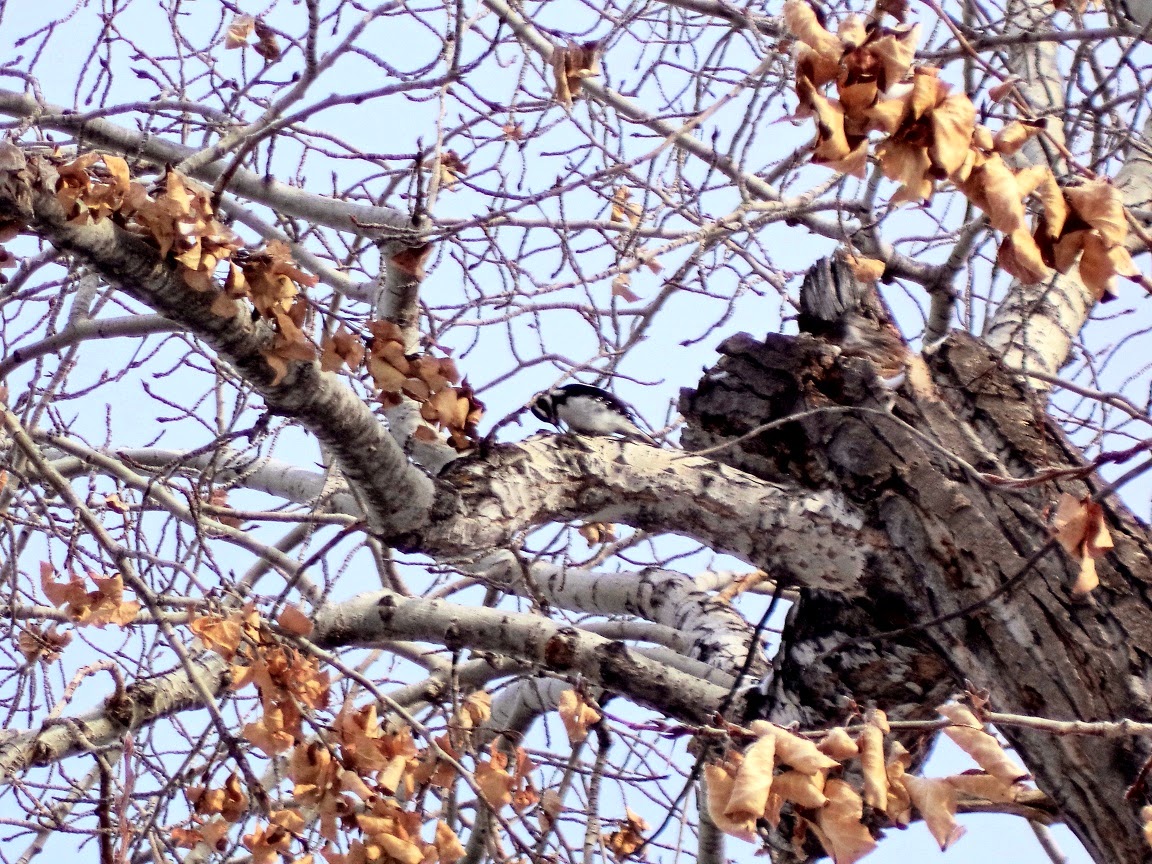 With the temperature going back to normal winter cold, I decided to have a little walk/run today and for that reason I went to the banks of Elbow River this time, more specifically in the neighbourhood of Mission. Just across from Safeway supermarket where Elbow Drive and 4th St. collide, there's a bridge over Elbow River and different parts of the river's bank natural area are named differently. There's a set of stairs at the right side of the bridge which takes you down, by the river and that's where it's Elbow Islands Park . If you walk by the river and in opposite direction you will see a pedestrian bridge which was destroyed during the June-2013 Calgary Flood and has been recently replaced with a new one. A sign has been put on the top part of the bridge gate at both sides which is read: Rideau Park . You turn right from the bridge's end and here's a neighbourood with luxury big houses and continue where after a short walk by the river you find
Post a Comment
Read more
More posts