Showing posts from April, 2013
Show All

Awesome Pranks for Workplace: 1- The Stoned. 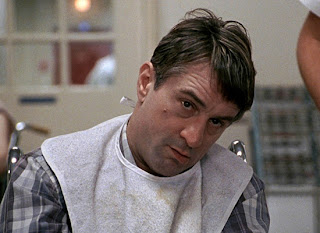 I just thought of two amazing pranks that could be used at work. In fact I am trying to see if The Italian  could join me to do this! I have to talk to him. One of them in fact was mentioned to me by a high school classmate years after we both had graduated. The other one came to my mind when thinking or a prequel(!) to the old high school classmate's. The perfect way would be using mine which I am going to call it The Stoned here and the second one which comes after that and is called The Deceased . Here are they are supposed to work: Story 1: Characters: 1- The sick guy (played by me)                    2- The Physician (Played by The Italian  or whomever found) Qualifications: Both characters must be excellent is acting and fluent in English , especially the physician since he has to do most of the talking. A female character can easily play that character as well. I just didn't mention in the first place because I know of no one who possibly can do this
Post a Comment
Read more 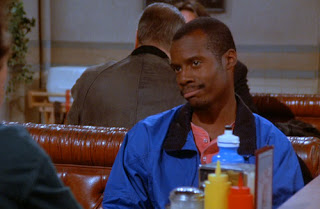 I had difficulty sleeping the other night (It was the same last night as well). On that night I made a kind of beef Steak meal with Caramelized Onion which tasted really good and we both enjoyed it. It had been a long time that we had not have red meat because we are trying very hard to cut that from our daily portion and reduce it to one meal per week. That main reason is for me is this stupid issue with Gout . So we had the dinner and in 2 or maybe 3 hours hit the bed. I started struggling, tossing and turning and could not sleep and eventually around, what time was it I don't know!, I had to go to bathroom and take a dump! My assumption had been me having some Red Rice with my Steak would help me digest better then sleep tight but obviously it did not work the way I had anticipated. F. F. does not like Red Rice but it's awesome meal because unlike White Rice in comes in whole grain. Then I don't know how long passed and I fell sleep and the strange dream st
Post a Comment
Read more

An Interview After More Than 2 Years!

- April 25, 2013
I had an interview last week. That was the first one in my field after a long time. I was hoping to manage it properly but now after a few days in seems that I screwed up. The problem was that the interviewer pointed at one specific standard and asked me if I had worked around that area of knowledge and I said that I was familiar but had not worked in the proximity of it! Ushof believes that I should have lied and expressed clearly that I knew the standard but I don't know. I think that was a stupid question because the standard or code covers a very wide range of expertise. It is similar to asking someone if he is familiar with ISO Standard !! That is the dumbest question ever! I think that could have been a good opportunity. There would be more work, longer hours, less, similar or just a bit more money but that would make a very good experience in the resume. I had applied for 5 positions prior to that. Not even a ring. And now I easily lost this one and don't know when
Post a Comment
Read more 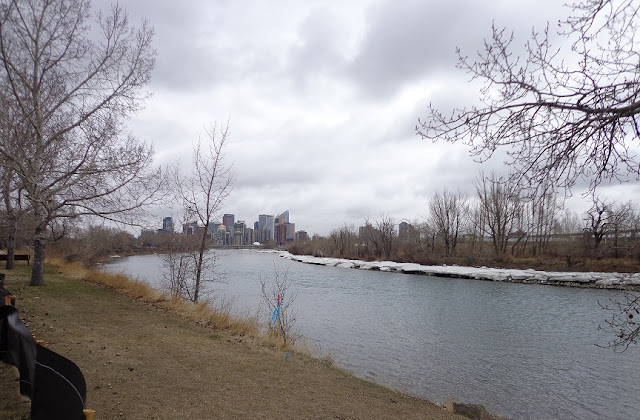 I went for my regular jogging to Bow River Path as usual yesterday. There were people around although it was cold for a Spring day. I realized lots of smiles and nodding and then saw a few running with T-Shirts on reading Running for Boston . In fact on my way to the path I had realized that there was a supporting run for the victims of Boston bombing yesterday but I was late to join. Nevertheless I decided to do a Bridge to Bridge Run instead of my normal 20 or 25 min. run. For that reason I started from Crowchild Tr. pedestrian bridge, crossed Bow River to its south bank, took myself to 14th St. Bridge , crossed to the northern back and ended up at the same spot. The entire run took me a little more than 00:20:30. I have decided to try this way of running instead of the usual time-based and see how it is working for me. (Photo: Bow River Path and Downtown Calgary at the end of the first month of Spring. Temperature was around 0 ̊ C and this morning about -7 ̊ C !)
Post a Comment
Read more 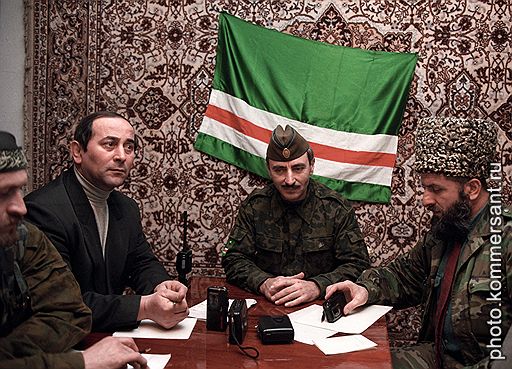 Today as soon as I heard about the suspect being from somewhere in Central Asia , I realized what kind of piece of crap, wild animal the Boston Police is dealing with. It immediately reminded me of another piece of stinking shit from Chechen whom was killed by Russian s, Dzhokhar Dudayev ! I remember from the 90s when the war was going on between the Russian s and these motherfucker animal nasty murderers of Chechen (Not that the Russian s are much nicer than them!) this asshole was killed when his conversation with a Satellite Phone was tracked by a Russian reconnaissance aircraft. The shithead dumb ass, being so fucking ignorant probably never knew that the all the conversations through satellite communication is traceable to the source and was cut to pieces! The funny thing about the criminal is that different places in a few neighbouring countries have been named in honour of him! The funnier thing about the whole Chechen War in the 90s was that Iran never supported Ch
Post a Comment
Read more

A Few Movies For Different Tastes 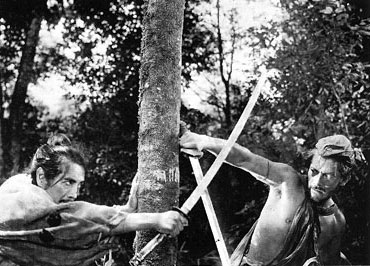 Have watched a few movies recently. Since I normally write about the ones I watch, I decided to write the last recent ones in this table. May be helps someone to pick what he or she likes: Ref. Movie Watched in/on Rating Remarks 1 Rashomon Disk ** (in this genre) I didn't like the ghost part when the victim tells the story. I find other works of Kurosawa better. 2 Identity theft Theatre **1/2 I had good laughs. Average comedy. 3 8 Miles Disk No Rating I usually do not watch this type of movies as I am not a big fan of Rap and Hip Hop and smoking weeds and shits like that. This movie truly shows what many societies in the US look like. Dirty streets, jobless people, drug and alcohol abuse, gun violence, etc. Many think everyone who lives in North America knows about these stuff but many don't even in Canada . The picture people have of t
Post a Comment
Read more

- April 13, 2013
I had a little discussion with one of the colleagues this week. He is one of those who thinks he's the best and knows everything. For a reason or two a higher-ranked officer in the organization got involved and he asked me to notify him of his mistake and also ask him the contractor change the way it performs work. I did so but the guy came back with the same stupid answer he had given to me. I was in the process of sending him a message saying if he was blind to see what I had written which was the boss's order, it was not my issue. While I was preparing my message, that the boss who came down with a slap in the face and shut him down! My buddy showed me his approval with a thump up but the Repulsive Turd came to me with his stupid argument as why I originally started this discussion with the pretentious guy. I defended myself and he admitted I was right somehow because I had obeyed the Big Brother 's direct order. I also thanked him and promised that I would change th
Post a Comment
Read more 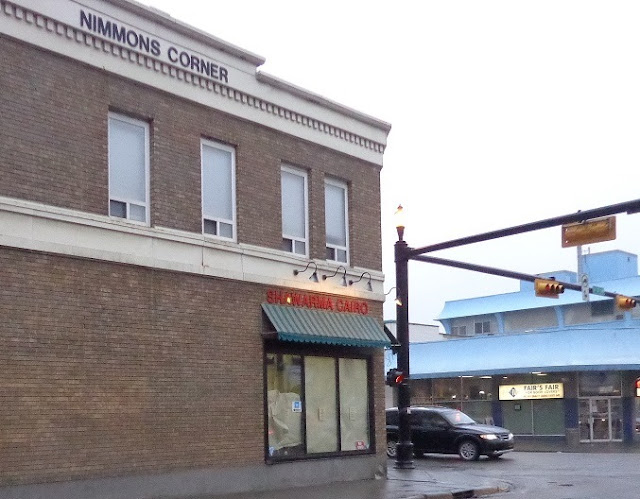 There was this asshole, fugitive, pretentious, Iranian guy, most likely from one of those Communist groups, someone who probably made up fake stories and seek asylum in Canada who used to run this little café at the corner of 17th Ave., and 14th St., SW , called the Chocolate Bar . I was once there with a Afghan friend of mine for a cup of coffee and the shithead said offensive things implying that he didn't want me in the café! I had never seen the guy before and nothing happened during the few minutes we sat there for the coffee but I never knew the reason behind his hostility. After all he did something wrong to himself because there are hundreds if not thousands of places in Calgary that you could go for a cup of coffee while there are tens if not hundreds of people I would prevent them from going there. The funny part about these guys is if they are communist, why would they chose Canada for a place to crash!? Why wouldn't they go to Cuba , China or before th
Post a Comment
Read more 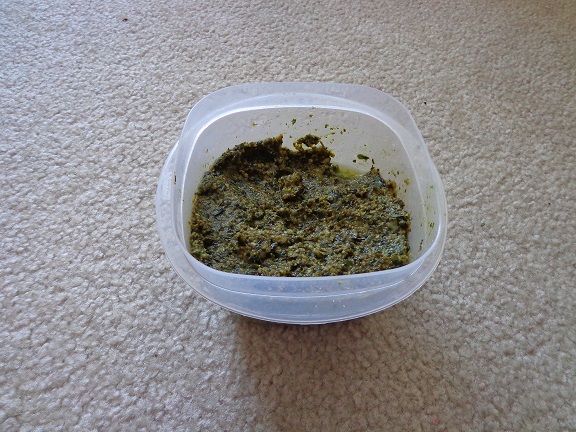 You might have seen jars of Pesto in supermarkets such as I did and even have tried that but by reading the ingredients I kind of backed up and decided not to. In fact everything you see on the shelf in your local supermarket, is sitting there comfortably mainly because enough preservative has been added to it to increase its shelf life so you can buy it easily every time you step in the store. So I decided to make it myself and found a recipe on the net. Here are the ingredients: 2 cups of fresh Basil . 2 cloves Garlic . 1/4 cup Pine Nut . 2/3 cup extra virgin Olive Oil . 1/2 cup freshly grated Pecorino Cheese . Salt and Paper to taste Simply put everything but the cheese and oil together in processor and make a sticky paste. Add oil gradually and mix together on slow speed, grate the cheese, add and mix more. The result should be similar to what you see in the picture above except that I do not have a good food processor and I had to use a small one which is
Post a Comment
Read more
More posts