Showing posts from April, 2011
Show All 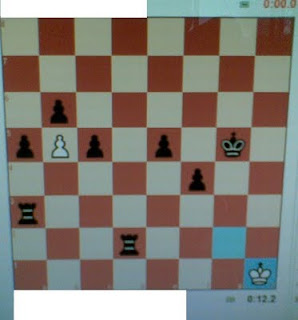 I was playing white against this French asshole whose ranking was much higher than mine and got his Knight at the beginning. I think he didn't like it because the difference was huge. Then he put the game in a kind of hold position for a long time and all we were doing was just moving around. It took probably more than 5 min. that I realized if I carry on like that I would be the one who loses the game because I had spent too much time after capturing that Knight on defense. So I sacrificed my Bishop and exchange it for a Pawn. Then the rest was up and down until the last moments that I did a quick game while I had to give up most of my power. I went down to a few Pawns only in the last min., while the asshole had two Rooks. I was done but this guy is most likely the most stupid chess player on the earth I won the game by time! He needed only one move to have me checkmate and in 12 to the end he did not the move fast enough and I won! I guess he got punished for being a big a
2 comments
Read more 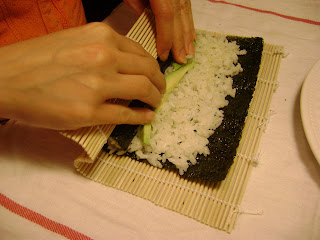 I don't remember when the first time was I had Sushi but that could have been around 2003. I bought it from a supermarket and went home to discover it! I clearly remember that I thought at the time that the Delicatessen crew had messed up the food by forgetting some kind of green paste beside it by seeing Wasabi ! Ginger did not seem very unusual to me. Then I ate the rolls and enjoyed. That was the start of my interest in Sushi . Then just a couple of months ago F. F. said that she had a Japanese classmate and she was going to teach her how to make Sushi . She did and yesterday was the practice day! I helped her and we just used vegetables and the result was good. F. F. said that she was about to get the feeling of how to roll. Next time we will use fish and will try the Outside-Rice type! F. F. said that she had been taught what to do to make that type. We're not goin' to use raw fish. F. F. simply does like it and we both are concerned about the consequence
Post a Comment
Read more 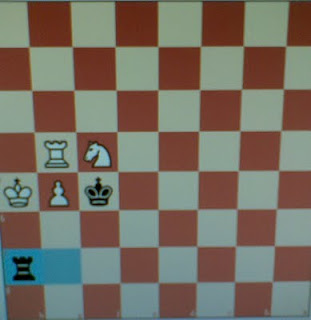 I was playing black a few days ago and managed to prevail while I was way behind and was being pushed to the corner. That should have been a real frustration and embarrassment for the guy. There's always someone who loses and someone who wins but the loss is kind of hard while you have a Knight and Pawn more than your opponent! And it's not that I did something extraordinary. I just like it. That's why I post it. Like everything else that I might post. (Photo: This picture taken from the monitor show the moment I did Rh7 and won the game)
Post a Comment
Read more

- April 13, 2011
Things were getting better on daily basis at the new job. I was being assigned to new works and learning more and more. The guy, though, has been the same asshole! I really don't know what the hell his problem is! My guess is probably he thinks that I might take over. With the kind of a trust that the Project Manager shows about him I don't think he should fear that. Today he showed up at work after everyone without saying Good Morning to anybody. He usually does that but not to that extent! And then only came to me once at the end of the day and complained that they (the company) was about to hire someone as a Quality Manager ! Considering he usually stays after regular hours up to 1 hour, it seems probably unfair to him. But I don't blame the company for doing that. All he has done during his tenure is Document Control , I mean most of the things not Quality Assurance or Quality System Engineering . I don't know who was the fucking idiot that hired him but obvi
Post a Comment
Read more

- April 07, 2011
I have seen so many of the guys that used to see them at the first workplace in Canada . Most of them have quit and do different jobs now. I saw Randy at a C-Train Station . He was playing with his phone like many other people and gave me his number. I called him once but never received a call back. Then I saw Jerome in a supermarket and Rudy working for a furniture company. G. H . was the last one I saw yesterday when I was walking home. I saw one tall guy with two kids in a local park. We both kept gazing at each other and eventually we recognized each other almost at the same time. That was unbelievable! G. H. looked fine. Although he does not doing really good financially but he seemed healthier than the time of he was bachelor! He has two little sons playing around him! Just unbelievable how fast the time flies. I had his home number so I got his mobile phone. We're supposed to sit and talk about good old and hard days of past. I hope I never go back to those days again.
Post a Comment
Read more 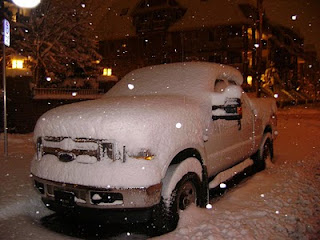 Last Sat. was a special day for all the Calgarians , I guess. It started snowing in the morning, before I woke up, I was told and continued for almost 12 hours. It got slow and fast at time but never stopped during the period. Nevertheless I went to Talisman for my exercises. There was a service disruption to the all hilly routes, mine as well! So I had to walk for almost 3 stops after the work out! Didn't bother me at all.I was just late a bit! (Photo: I took this picture on my way back home around Talisman area. You can see that there was more than 25 cm of snow. You can even see the snow flakes!)
Post a Comment
Read more

- April 01, 2011
I finally found a place last week and wanted to get out of the shit-hole without saying anything to the asshole genies. So I went back and forth several times to take my stuff to the new place because I didn't want to pay for a cab or rent a car. So I had everything taken to the new apartment and it was a Sat. morning when I had a big sack, my laptop's case and a few more things. I had to wake up early when everybody was sleep. I had my watch set for 05:30 in order to be able to catch 06:05 AM bus but when I woke up I realized that the fucking nocturnal guy, who had just laid off 2 weeks before that, was still up, staring at his monitor. So I had to wait. I knew I would not be able to get out without being seen by the landlord's spy! So I waited a bit more. In fact I had to wait long enough to have the asshole back to his sleep but that was late enough at the same time to have the landlord out as well. I didn't waste any more time and got out. Leaving the key on the
Post a Comment
Read more
More posts