Showing posts from February, 2012
Show All

The Most Amazing at Glenmore 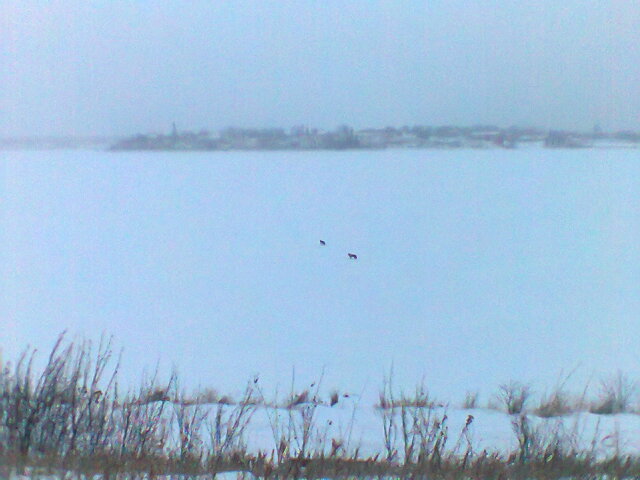 I went to Glenmore Park , the section adjacent to Heritage Park for my normal running. It was snowing and almost -13 degrees C and there was barely anybody there. My car was the only one parked there around 17:25 hours. I got on the track and walked a few steps and then started running, followed the path toward south. Just after around 2 minutes I thought I saw a dog in distance. I told myself that someone was walking his or her dog. Then when I got closer I realized that, first that the dog was not leashed and then I found out that was not a dog! Looked like a Coyote to me! The poor animal was probably hungry and looking for food in the bushes and shrubs! I soon lost the track of it. I tried to get a good shot but this new mobile phone has a stupid camera! Only 0.3 Mega Pixel! So I carried on until 10 minutes passed and then turned back and took the same path, the opposite direction. I was running and I was on the upper path. There is another path which is closer to the reservo
Post a Comment
Read more 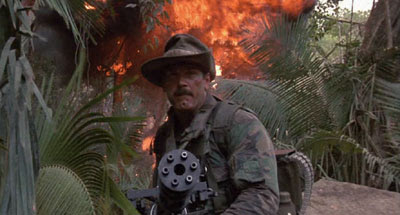 All the stupid mistakes that I made in the first few years of living in Canada are now beating me in the ass! I failed the damn NPPE and foolishly refused to write it again! I failed the damn CQE exam of ASQ and now I am paying another $260 and have to write it again while am not really ready and stopped job searching and now I'm stuck with this ignorant morons without much chance of getting a better position. I only have a very limited time. If I do not move fast enough, I'll be done. In the meantime A. F. e-mailed me and encouraged me to apply for the new posting of CBSA . I don't know if I wanna go back in there or if they ever accept me but I will give that a shot. The struggle seems never ending and it's payback time for me! (Photo: Character Blain in The Predator has this quote of Payback Time although he never got the chance to use his machine gun and give The Predator a full magazine. He was the first one wasted!)
Post a Comment
Read more 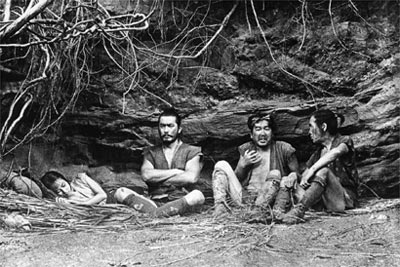 For years and years I wondered what is special about The Hidden Fortress , one of the most famous movies of Kurosawa that IRIB did not want to broadcast it while most of his movies have been shown over and over. I finally found when I bought the DVD of the film from Farmers Market last year and watched it twice. One of the main characters of the movie is a young girl in shorts and sleeveless shirt. Obviously violates the basic policy of IRIB ! The kind of dress that the Princess of Azuki has on in the movie was not considered appropriate in that time when Japan was considered a feudal country. You can see it clearly by the way the public looks at her in the movie. And still not appropriate in the IRIB 's view and organizations like that. But who care whet they believe in!? But the movie itself is not as great as what I expected to be. The movie is basically not about a hidden fortress. The fortress only occupies probably not more than 45 minutes of the 2-hour movie. It i
Post a Comment
Read more 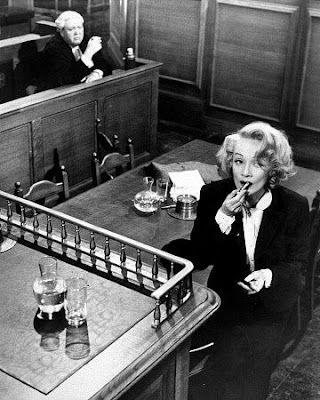 For years I had heard the name of a German actress over and over, Marlene Dietrich but had not seen any movie of hers until last night. I was playing with the remote after dinner and stopped in a channel which was showing a black and white movie from 1957 . The movie was Witness for Prosecution staring the above actress and Charles Laughton which was known to me at time. It was a good movie and although a few minutes had passed from the beginning, we continued watching it to the end. Dietrich 's role is an aggressive and proud woman who is trying to trouble the guy whom she lives with and testifies against him. To the last minute of the movie everything goes the way that movie follows. There is an evidence that the woman is lying and she is being accused of perjury, the man, the one who assumes is her husband is found innocent by the jury and everyone is happy. But right at the moment that everybody's leaving the theatre it appears that all the woman's act was actually
2 comments
Read more

Capitalism Does Not Give You Choises 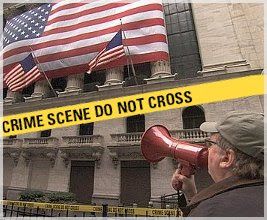 This movie of Michael More , Capitalism: A Love Story is interesting but not as good as his 9/11 story. However he condemns good enough the bullshit story that these stooges have been trying to sell to people. One of the principals that they claim Capitalism provide to the society is competition and choice. They say you have the choice to choose what you like and in fact this makes the service providers or manufacturers to improve the quality of their service or product. This is not entirely true. I had to pay $72.72 for my electricity b ill last month and live in a small 1-bedroom apartment! I had no choice but to pay it and there was no way to question the charge. If there was the answer was: the rates have gone up recently! I had no choice but to pay that and I have no choice to get my due date extended, if I do not have money . More than 3% interest would be charged to my bill if I pay my bill late. I have no choice to go to another electricity provider and I can not tell E
Post a Comment
Read more

- February 15, 2012
Many things have been changed in more than 10 years that I have been living here. The time flies by. One day I wake up in the morning and I say: It's Mon. I have to go to work and the next day, really next day I see that it is already Thu. and I have one more day to go. I know that I don't have much time left and if I wanna do something I gotta do it this year or at the most the following. Earlier I strongly believed in the Three Essentials but know I see that I am losing too much money without gaining much in return for them. The Bastards of Fido put me into a damn 2-year contract so I can not get rid of them until next Feb. unless I pay $20 for each month I cancel my service. I can do that and still save some $20 a month but I need that for a reason that I will tell later. The damn car's insurance just cost me almost $1900 ! I tried to get away from that but my situation is different from the time that I did not have this stupid service and would go anywhere I wanted
Post a Comment
Read more

- February 11, 2012
There is this knew guy who has joined the company recently, T. T . He seemed a reasonable guy but it didn't take a long time for me to find out who really is. First off he was shortly known by T. M. Apparently T. M. had been to his office once a few years ago and had audited him and the guy was completely out. Then when he talked about his past there were obvious skips and contradictions which showed that he really had not done something that he could be proud of! The funniest part was the presentation that he had. That was one of the most stupid one that I had ever attend to! He would just read the title and would say it was very important as well! His catchphrase is and such ! But one thing that he said was really true. When we were talking about the obnoxious, repulsive, little turd supervisor of mine he said everywhere I went would have an asshole like that. Everywhere is almost the same, the same shit, just a different smell! And he added: The Devil you know is better tha
Post a Comment
Read more 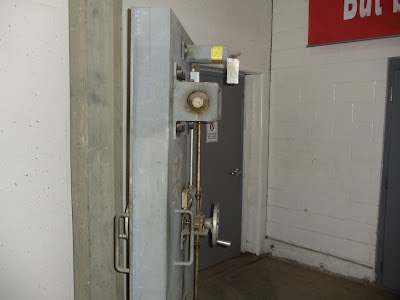 T. M. had a two-day trip to a manufacturer plant to check on them. A kind of like pre - assessment . Sounds something very simple and normal but listen to this. The facility is built at a former nuclear plant complex! For the people who always complain about how long a project may take in the old country I would like to bring their attention to this. The project had to be halted after 76% completion and that was a result of a huge budget shortfall. The US has spent billions of dollars on the wars in the past few decades but they did not have enough money to finish this power plant! The manufacturer has apparently leased the site and turned it to a 3-story facility and according to our buddy they are good to go! (Photo: This picture taken by the passenger shows one of the protective gates which probably opens to part of the facility which supposed to be a high radiation area)
Post a Comment
Read more 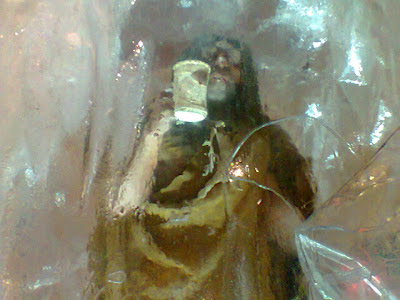 We spent a few hours in the newly (2009) built shopping center in Alberta , CrossIron Mills near Balzac . I'm not a shopping maniac but seemed many enjoy themselves walking with bags of goods or having a meal or snack. It is nicely organized and decorated and has mostly all of the retailers and different entertainment centers. What I don't understand is why the retailers have to build a shopping center like that while Deerfoot Mall is only 10 minutes away. I know one may say that Deerfoot is an outlet mall but it's still OK. We did mostly window shopping as F. F. hard to please! She did not see anything that she like after almost 4.5 hours in there! (Photo: Caveman in a block of ice was put in one of the mall's corridors . I took this using the new handset of mine a Nokia X2. The phone is good but the camera sucks! only 0.3 pixels !)
Post a Comment
Read more

- February 01, 2012
The average daily temperature in Calgary is around 5 C , I think while Environment Canada had predicted a very cold winter, the worst in the past 10 years! But when it's 10 or 8 it's not really pleasant because the damn wind bothers you then! So when I went to the Eau Claire outdoor rink last night the ice was really messy and it was cracking under my feet. It was not really nice for a beginner like me! So I didn't spend much time, may be around half an hour at the most and that included putting the skates on and taking them off which is a real pain. The problem is the lace. You have to tie them tight so your feet would not move inside the damn skate. Tomorrow I'm goin' to the University again for the third session and it seems the weather will remain the same so I will park somewhere that I won't have to pay! I'm getting far from the subject but this stupid parking is a real rip off! I guess I paid a $5.25 for an hour and half and it's probabl
Post a Comment
Read more
More posts