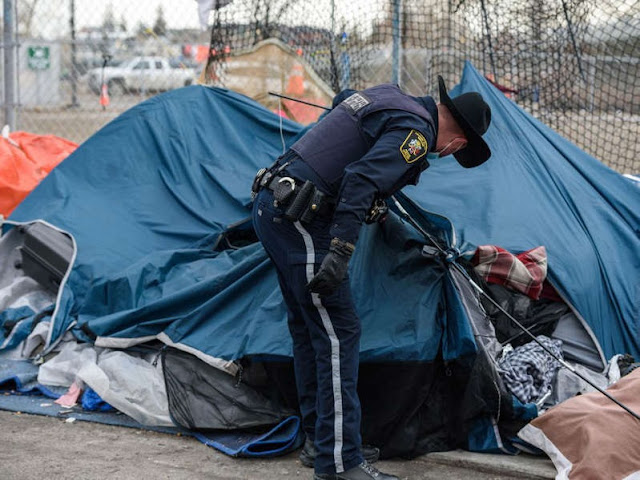 I've written earlier that Canada is " the heaven for criminals " whether they are born in the country or they come in and I'd like to repeat it! I was driving to Downtown Calgary a few weeks ago and while passing the D. I. (Drop-In Centre, for the one who don't know what it stands for), I saw tents were put on the side of the road and next to the building. D. I. is a non-for-profit organization, a big multi-floor building which shelters homeless in Calgary. It's fine but the issue is the majority of homeless is criminal. They're drug-addicts and drunkards who any chance they get break into your home of car or attack you for whatever you have on you.
My car was broken into twice when I used to live in Downtown Calgary, twice! The bastard took everything: CDs, flashlight, GPS, you name it and of course CPS cannot do anything about it. I filed a report with them the first time it happened. I didn't even bother the second time! The funny thing is there're organizations rather the D. I. which support these criminals, including The Mustard Seed! They send me donation request letter once in awhile! It's inevitable for someone who has gone through a bad time, not to be a drug-addict and drunkard! It's wildly acceptable in the society! They believe in resorting to substance to calm themselves! " They have no choice "! It's believed here!
With that said when I heard that CPS have removed the criminal nest next to D. I. just a few days back, I was a bit happy, although they would move to other " holes " and will continue their savage acts.
The mindless tugs who are interrupting life in Downtown Ottawa or blocking Alberta-Montana border at Coutts port of entry and other parts of the country are not better than the drug-dealer and stabbing homeless. They should be treated the same because of the damage they have been doing to the minds of people and economics of the country.
(Photo: A CPS officer is trying to inspect inside of a tent next to D. I.)
Governments Western Culture