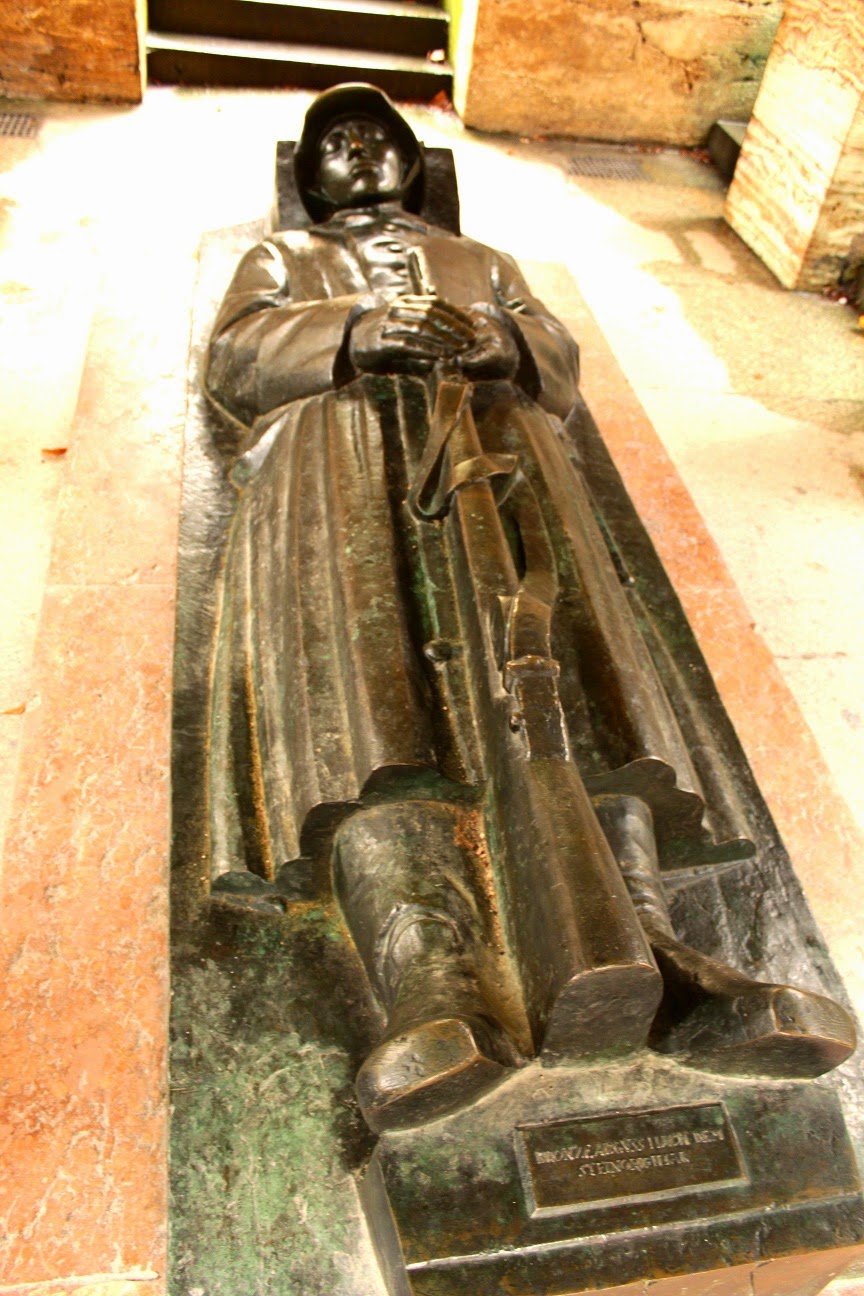 The tomb was originally erected in front of the former in , the building which is the State of administrative department, the government similar to the provincial government in , for example. I was coming from the other site, on the sidewalk parallel to Franz-Josef-Straus and noted the building and not knowing what it was, wanted to enter because the building with its nice architecture was very welcoming. An old police officer, in full uniform, was coming towards me when I was getting close to the entrance and I noticed that he was looking directly at me. I asked him a question similar to if public access to the building was permitted and he told me, in very fluent English, that it was a government building and not open to the public.
I went around the building and found myself in Hofgarden. It was when I realized the structure in a sunken part, surrounded by thick stone walls. When I went inside, and it seemed to me that no one else was interested in that partially-cloudy day, I saw the tomb. The provided information, curved in the walls was in German but I could understand the WWI era mark by looking at the 1914-1918 writing.
It was a surprise as why a war memorial which commemorates the Great War German soldiers still stood there intact. The shrapnel wounds are still clearly visible on the pillars of the State Government building after more than 70 years. It is remarkable that it survived all the heavy bombing and ground attacks.
The old photos from Nazi Germany era show soldiers guarding the crypt-like memorial just like the way the soldiers are guarding the National War Memorial in and one of them was shot dead by the radicalized maniac. No soldier is guarding or posing for respect there today but the WWII notes and marks are also added to the memorial plaque which again brings surprise to me. This reminds me of the Japanese authorities a few years ago who had visited the Japanese WWII dead graves or cemetery and had a few remarks in that regard which caused anger and displeasure within the Chinese because by visiting and showing respect to those who lost their life during the WWII, people actually approve their actions, or maybe that’s how I see it.
Hofgarden, as I explained earlier has a nice outside restaurant/café, still is in business and it was the fuhrer’s favorite hangout in beautiful summer days of . It was closed due to the weather and also maybe the time of visit or perhaps they were only serving inside when I visited Hofgarden but the tables and seats where positioned quite similar to what you may see in the old photos showing Hitler’s visits at the time.
(Photo: I couldn't get a good shot but the tomb seems to be similar to what it originally put: A soldier in full gear laying on the floor, in peace)
City Sightseeing History Travel