CFLRS Notes (8): One Night in Farnham 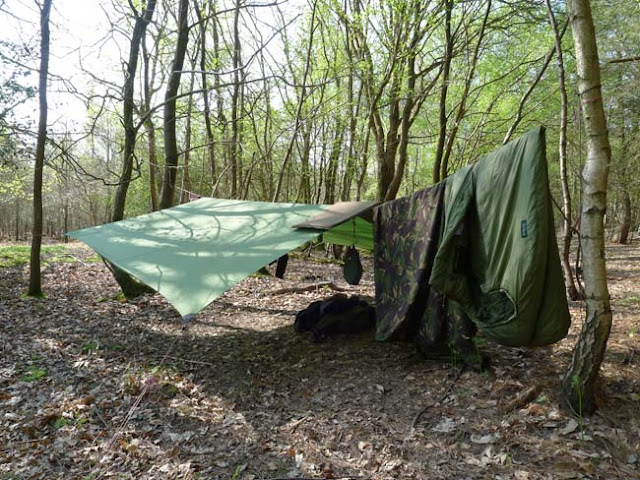 Farnham is a little town south of Montreal which is used for field training by CFLRS. There used to be a WWII POW camp there. We were scheduled to go there for a day and a night. That was my second trip to the place. After the primary activities and a little theory courses, we were to set our camp in a swamp which it's actually called bivouac! Yes! Recruits set up there camps in a forest area and that day it was raining and it was wet and muddy everywhere.
The first thing you have to set up is your tent so you don't get wet during the night but there's a little issue: There's actually no tent! Instead you have a long tarp which has zipper at one side and you match with another recruit's and make a roof on the top of your heads! It's very narrow and the two people, especially if they're a little big, will have a hard time fitting in! You use strings and pieces of wood to tie two ends of the tarp to two trees and stabilize the tent-like shelter to the ground. There's no bottom! You will have to use your air mattress which actually is not too bad but it's very narrow. This tent-like shelter, which is designed for sleeping only because it's too short to be sit in, is called Hoochie but don't use it individually! Use it with the word tent,coming after it if you're looking for it in the Internet! It should be Hoochie Tent because the word Hoochie by itself means something like slut! I asked the Lieutenant whether the term was Japanese or not. He said he did not think so. When I looked it up (after finding the right spelling and knowing the meaning of Hoochie by itself!) I learnt that the word is probably has Japanese roots!
Setting up Hoochie is not hard. Sleeping in is a bit, particularly if it rains all the fucking night! We had a lesson on how to use Lantern and Field Stove which was good and we got the chance to see and taste prepared food. There was a variety of them: From Spaghetti with Meatball Sauce(!) to Chicken Breast with Vegetables and different types of sliced fruits and desserts(!)
We eventually decided to get to the damn Hoochie and get some sleep especially because we had been woken early to be able to get to the bus on time. It was raining but it was not very cold. I first decided to sleep on the top of sleeping bag while it was laid down inside a waterproof bag and that was on the top of the air mattress because we had been advised that sleeping in the sleeping bag would require to take all the cloths and be only in underwear and I didn't want to do that because I didn't have a spot to put my cloths. They would get mud on them. It was a disaster. I first left my rucksack, helmet and vest outside because the rain was not much but I had to bring them in as the rain was intensified. I arranged myself on the top of everything I had brought while have all of my cloths on, even my raincoat(!) but soon I realized that my butt was muddy and wet! I tried to ignore that and sleep for a few minutes and even fell sleep once but my buddy said something or made a noise that made me up! I then decided to go to the toilet and there I used a few pieces of toilet paper and covered the wet area!
I then went back to the Hoochie while rain has not gotten slower and the bivouac was like a real swamp! You would go a few millimeters down when step your foot on the ground. It was colder than the evening so I took my muddy boots off and went inside the sleeping bag with the hope that I get a few hours of sleep. I guess it was around 05:45 hours that I was woken up by my partner. It was our time to watch. Every two persons get a half an hour (our in cases an hour) of watch for the camp. We were lucky that we were the last team and didn't have to break our sleeps! Collecting the stuff (both personal and common) was the next. We then transferred the rucksacks to the gym so the truck could be cleaned and then cleaned the gymnasium itself and after a course in the rain (which was presented by the Lieutenant) we headed back to the garrison for lunch. Overall it was a good experience but its level of intensity was not even 1/10 of what recruits get as members of their platoons(!) but we learnt a lot and enjoy the trip.
(Photo: The Hoochie tent we assembled was quite similar to this one in the photo except that the sides were closer to the ground and we used pieces of small woods to secure that and the ground was not as clean and nice as this picture. It was all muddy and wet with pieces of rock, tree roots and broken branches and was not leveled like this!)
Career Food