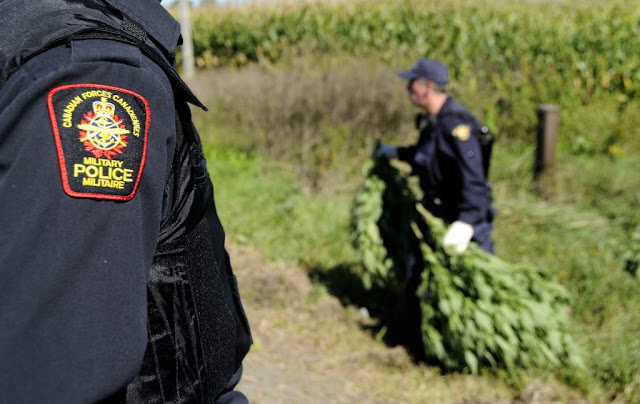 Military Police, with all due respect to the members of this fine organization, is probably one of the most boring jobs there is! In CFLRS their jurisdiction, as far as I know and I hope they don't get upset or anything if they read it, is limited to the garrison itself. I don't think they can do much outside the walls or barrier. The recruits though, could be picked up and charged by any police force in the country! So you get my point! There's no doubt that other bases and operation or mission zones have their own MPs but it's like adding one extra organization to the organizations which already are active in an area and separating their area of work, something which is common and routine in Canada!
When MPs show up in an area, say kitchen or gymnasium, everyone is alerted and asks one another if the have done something, for example last night! It reminds me of an old Persian proverb which my Dad used to use it and it literally is: When you go for a rock (to pick it up to throw), the thief cat jumps back! It might be hard to understand for the ones who are not familiar with the culture!
It means the one who has done something bad and expected to be caught sooner or later, jumps up as soon as sees an authority.
The interesting thing is that even when they go somewhere very calmly just to check on something (or look for someone as we really don't know what they are after, that could be that as well!) they leave their car in the middle of the road with its beacons on! I guess they do that to make it more exciting for themselves and also create fear in the possible criminals and everyone else!
(Photo: Military Police shoulder patch on a member and of course it's bilingual as it's a Government agency. Another person is seen in distance. I don't know what this photograph is about but I hope neither the owner nor the MP is concerned about it)
Career