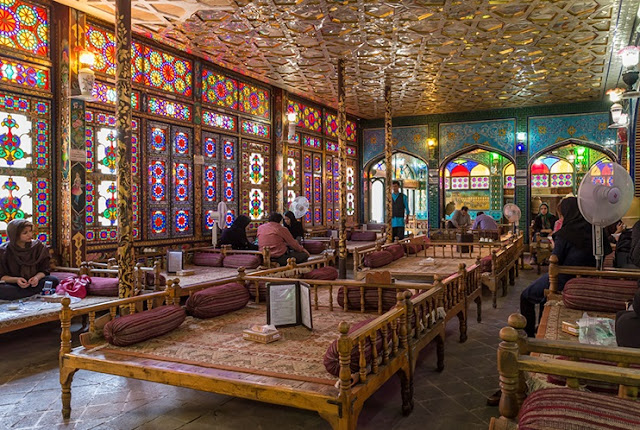 Different nations are obsessed with different food. Canadians and Americans love Stake and Hamburger! Orientals cannot live without Noodle (which I hate the most!), East Indians live for their Rice, Curry and other hot and spicy food and Iranians must eat Kebab off and on!
I'm happy that I have never been accustomed to any kind of food which lack of it might drives me nuts!
With that in mind I have to say that now and then The Chef insists that we should get out of the town for a hike and then make some Kebab! And now that his knee is shattered (As he refers to what happened nearly two years ago) he insists on light hikes only. Our last hike together was to Horsethief Canyon and we enjoyed that. On the way back, as I explained we realized that there was a fire ban for the area. We headed back to Calgary with the hope that we find a place on our way before reaching home! What a bad idea! We checked a few parts in Airdrie and Calgary on the way home and they didn't have fire pit. The I drove to North Glenmore Park where once we tried(!) to make Kebab. Fire ban was in effect there as well! I was losing it! I was so mad at both this freaking idiot who is so much in love with Kebab and myself who listened to him and agreed to pay $50 for the ingredients!
I drove back to The Chef's place then to see what we could do. There he told me to go the house he has recently lost! He and his partner were not able to pay the mortgage, and that was mostly the other guy's fault. The bank sent them a number of warnings and then eventually kicked him out! There while we were approaching his new place, which is a basement near his old house he goes: I've lost this $500,000 (It was actually around 420,000. Even that was overpriced by the damn mortgage broker so he [or she] could make better commission!) house. Can't I just have a Kebab in the back yard?! Of course you can't! I told myself. That house doesn't belong to you. In fact it never belonged to you. The bank owned it and you were paying the bank and they let you occupy it as long as you are paying your mortgage. Now that's you're not, you have no right to step in that property. I explained to him in simpler words but it didn't work! We went there and entered the backyard. As soon as we stepped in and got close to the fire pit I noticed a paper on the window of the basement stating the status of the house and warning about the possible trespassing! That woke me up! If I  don't see the note, I would be able to say that I don't know, if I get caught, although not knowing the law, does not justify breaking it! However the note is there and clearly warns trespassers! I told The Chef about that while he was working on fire and had half of the damn charcoal bag in the pit! I got out and parked the car just away from the house so in case we had to get the hell of there, we would be able to do that easily! As well it drew less attention. In the meantime one of the neighbours showed up in the back alley. It looked like he was putting some garbage away but he could also be checking us! I told that to The Chef and started collecting our stuff. He also, after seeing the guy, got a grip of himself and we got the hell out of the house before we get ourselves with the complicated law of trespassing! It's needless to say that even now that I'm typing these word we could be called and charged with Trespassing! It requires only someone who taped us! I strongly believe the tape could be used as a proof and the judge would charge us both with the crime!
Anyways we went back to the damn house were there already an old barbeque was sitting next to the door. The Chef started using skewers and make the Kebabs ready. I added some charcoal and we had the fire going on after a few minutes but it was a disaster. The Kebab mostly came out raw or burnt! However a few came out nicely and we ate them. It was late and I had to go to work the next work. I left and I guess by the time I reached home it was nearly 23:00 or even after that! I promised me not to involve myself with Kebab making especially when it's dark and after of hiking and tiring drives!
(Photo: This is a nice traditional Iranian restaurant where Kebab and other local cuisine is served. Food and beverages are served on the beds! Customers sit and lay back onto the provided cushions. You can see menu on the middle of one of the beds. However I don't even know where it is located and what the name is. Found it by chance in the web. Anyone with any information please help)
Food Iranians Residence