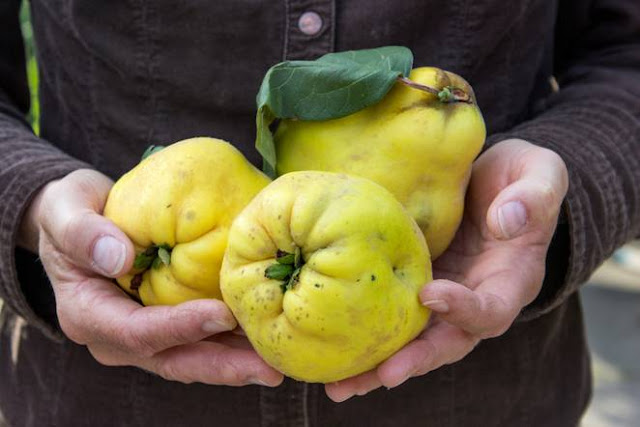 There's this store at the corner of 12th St. and 46nd Ave. SE that I've checked it a few times so far. It's ran by an Oriental family I believe and they have mostly good items with reasonable prices. I noticed a big crate full of a type of fruit during one of my visits and when I looked closely I realized it is something that I haven't tried for years and not specifically in Canada: Quince.
This is a type of fruit which, as far as I've experienced, is not eaten raw because it's hard, even when it's ripen and a despite its unique taste it's acrid.
I have tried that as jam and stew in the old country. So here I did the same: I made Quince Stew out of the one I had purchased just to see how it would taste and it was fantastic. I'm sure it is fixed differently in other cultures including China where this family is probably coming from and is a major producer of the fruit but it was a good buy. Many recipes are available on the internet and cooking books which prevents me from writing one here but get one or two or as many as you want while they're open. Their winter closure is imminent and I have not seen this fruit anywhere else in the city or for that matter anywhere else in the country(!) in the past 15 years or so!
(Photo: A randomly selected photo from Internet which shows good looking quinces!)
Before Immigration Food Orientals