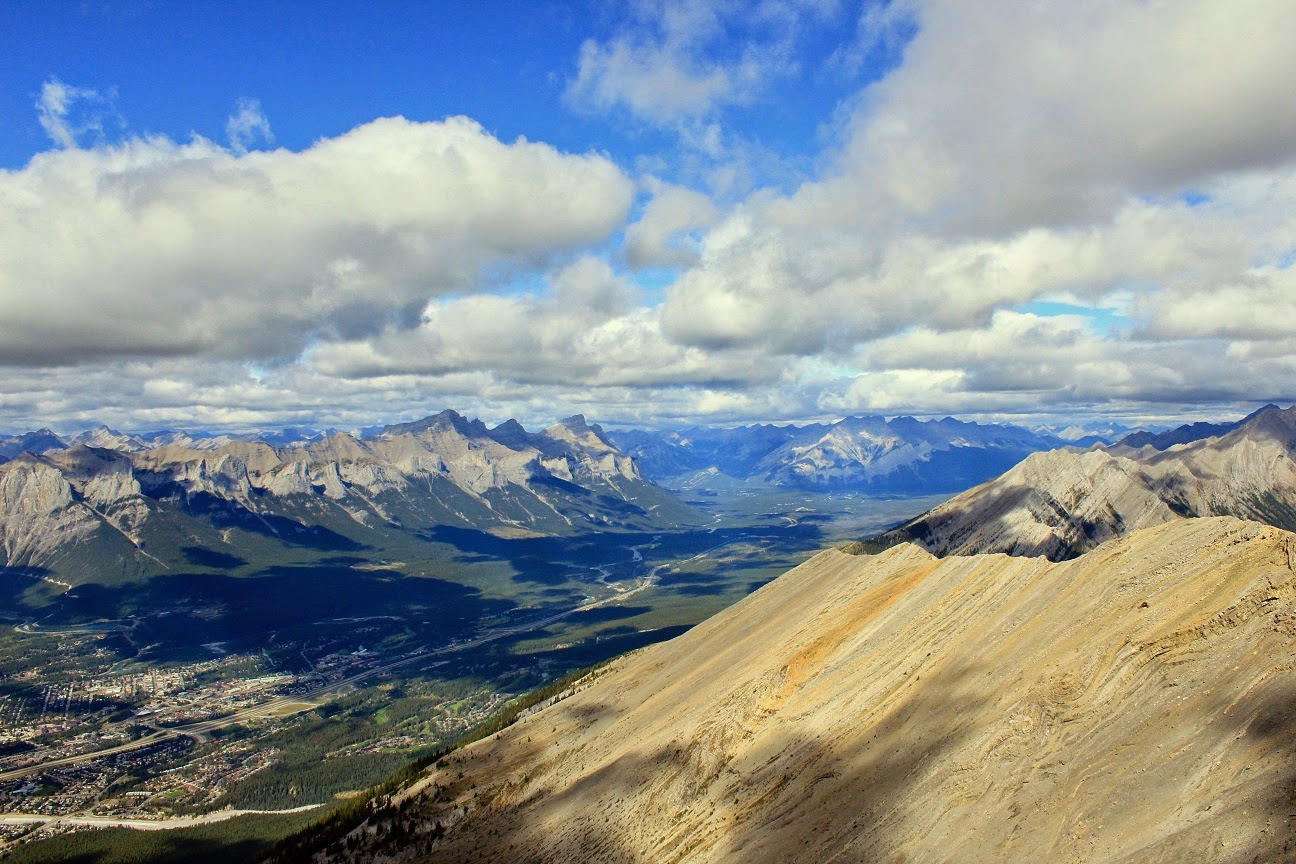 As I indicated earlier and many know the hiking and scrambling season is short in Canada for most of the people. Not many would want to go up a mountain or walk by a frozen lake when it's -15 degrees C and the wind is blowing to their head. I had planned for as many as 22 hikes/scrambles for this summer/fall and because I missed a few days I decided to do another one yesterday, Labour Day. For that I chose Grotto Mountain in Canmore, the scramble that I had tried 2 times previously and had not finished once due to the bad timing and kind of intimidation and the second time due to losing the route.
I didn't do any mistake this time or maybe I should say no major mistake. I left home at around 05:20 AM and everything was fine. Just when I was closing to Canmore I saw the sign for Exit 93 while I had to take Exit 91! That cost me at least 20 damn minutes if not a speeding ticket because I had to go to the town and this damn town is all covered with Max. 50 and Max. 30 signs. Eventually I got myself to the road which leads to the trail-head and of course Alpine Club of Canada. There were only two cars parked there and none of them seemed to be scrambler. I geared up quickly and started at about 07:15 AM. Another thing that cost me a few minutes was the food I had eaten the night before and it was a lot! I had to take a dump so that was another time-consuming, non-productive activity of the day. I was perfectly fine after that and after looking at a few available signs I stayed at the west side of the main gully and simply took the trail. The trial is very steep and requires utilization of one or two trekking pole. I have none but I use a branch which I have taken it to many hikes and scramble and it came very handy this time.
I guess it took me about 02:30 h to reach the ridge. That's where you get a nice view of Mt. Lady Macdonald. From there it's all walking to the ridge which is easy and the trail is well-stepped on and visible.
When you reach the ridge there are spots which are scary and close to the edge and the trail is faded. The other problem here is loose rocks which actually is not as bad as what I experienced in Yamnuska and The Middle Sister but you have to be careful. You gain a little elevation here as well but it's not more than probably 20 meters or so when you reach the summit. The wind could be a problem here. It was blowing and the closer I got to the summit the stronger it got.
At one time I was so frustrated by the strong wind and tiredness that I wanted to give up but then got it all together and claimed up a big rock which appeared to be the summit! When you reach the summit you have to look for Solar Panels and antennas on your east side. If you see them in a short distance below you it means you have reached the summit. The Three Sisters are of course to your south, Town of Canmore below you and Lac Des Arcs to your east as well. There are mountains at your north but I have no information on them. The entire ridge that you walked on and Lady Macdonald are both at the west side obviously.
The sun was shining and that was a relief which helped to warm up a bit. My hands were frozen but I didn't want to put a pair of gloves on. No one was seemed to approaching even from far distance. I took a few photos and headed back from the same side. There was nothing especial on the way back unless a few times missing the trail but I managed to find it quickly. Just when I was ready to leave the ridge at its most western spot and head down the trail I saw a guy was coming up. He was young and tall but tired and panting. He asked me how long I had stayed on the top and I told him. We said good luck and split quickly.
There was nothing on the way down and no one else was seen coming up not a soul. It seemed that people wanted to spend the last day of school closure somehow else. I guess it was almost 14:00 that I reached the vehicle and accomplished something that I had in my list for about a year: A very good scramble.
(Photo, top: The camera is turned to west while on the summit showing the ridge, part of Mt. Lady Macdonald, part of Town of Canmore and Bow Valley, even Cascade Mountain at the end which is another destination in my list)
Hiking