A Briliant Work: Bowling for Columbine 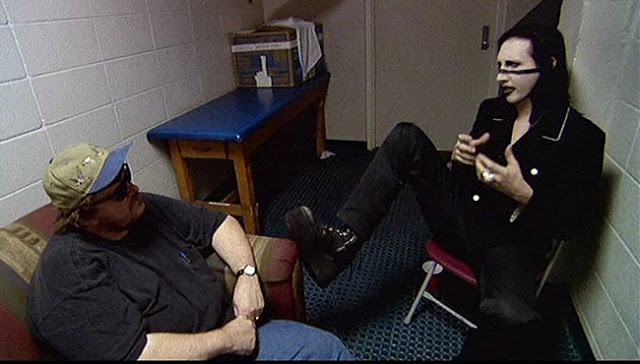 It is an interesting coincidence that I found this movie, a documentary, called Bowling for Columbine at the same time that a maniac opened fire from his hotel in Las Vegas on innocent people who were attending a music festival. As soon as I saw Michael Moore on the DVD in Value Village, where we went to get something for The Chef, a few weeks ago, as I mentioned earlier, I garbed it because I was sure that Michael Moore doesn't make something which doesn't make sense. It's got to be good! And after watching the documentary I have to say that it really is good. It's a briliant documentary.
This movie actually show how wrong Americans are. This was made back in 2002 and who knows how many innocent people have been killed in the past 15 years because by maniac simply because stupid Americans do not accept the fact of gun control. I am not following the news these days to the same level I used to. First of all it's because I don't have a TV. Secondly it's because I don't live in a comfortable place that I can move around freely and do what I want to do, whenever I want to do it. I'm sharing a small apartment with others and it's like living in hell but what can I do while I don't have a stable and reliable work? It's the subject of another of another post later.
So the Americans, I found out after a little study, that they have different amendments to their constitution which is basically the Basic Law.
The fact is the US Constitution was created in Sep. of 1787, originally and then ratified less than a year after that. The constitution has 27 amendments! It seems that when they were writing the damn thing, they all of a sudden or during a period, they remembered they had forgotten a number of key subjects and then decided to add them to the document!
The second amendment, which by its placement seems to have a high priority in Americans' list, refers to firearm possession. It protects the right of people to keep and bear arms which was adopted in Dec. of 1791, three years after the constitution was ratified.
The reason for having such right has been described as the natural right of self-defense(!),  resistance to oppression(!), and the civic duty in concert (agreement it means here. Don't mix it up with the meaning of the concert in Las Vegas that poor spectators where mascaraed!) in defense of the state!
All the above reason, when they were included in the silly amendment, made sense more than 225 years ago but they all seem stupid and ridiculous at the same time, today. Is this so hard for Americans to understand that the law which was enacted more than 200 years ago, could not work today?! Apparently it is! It's the same fact with Muslims who want to include Sharia Law to Canadian and other countries' laws! A law which was probably good 200 or more than 1000 years ago, now belongs to garbage can!
Let's look at the reasons that they refer to in order to keep the damn, stupid Second Amendment acceptable and enforceable:
1- Natural right of self-defence! That's what the police is for. Especially in a country like the US that there's no shortage of them: local police, FBI and many other law enforcement agencies. Maybe more than 200 years ago that would make sense but not now. Besides you have to find the root cause of crime and resolve that permanently. as much as possible, instead of giving everyone a gun and tell them to shoot when they file they should.
2- Resistance to oppression! This is the funniest amongst the three. What type of oppression are we talking about in the 21 century?!  Oppression that Black people use to be under? Or oppression that a woman might feel from her abusive partner? Either one, in today's world cannot remove that oppression buy using a firearm. If they conquer the oppressor, that would be only temporary. That does not the other oppressors from doing the same thing.
3- And the last one, as stupid and ridiculous as the first two, indicates the time that people have to defend the state! Maybe not 220 something years ago but now the US has enough armed forces in different shapes and types that can engage in fight at five corners of the globe without being short on military staff.
So if that's why you people think you should stick to the second amendment, I have to say, that's stupid and has caused innocent people to die every years in big numbers.
Michael Moore tries to analysis the situation and come up with this answer as why the number of people who are killed in similar incidents are more than anywhere else in the world and evaluates different hypothesis. But none of them answers the question.
He also interviews different people in the film. From the parents of victims of Columbine High School to famous actors such as Charlton Heston and popular singers such as Marlin Manson.

The film is so great and you don't want to leave it until it's done but the short interview with the late actor Heston is very interesting. I knew from a Jim Carry clip, which was released, I guess 3 years ago, that Heston was one of the supporters of the Second Amendment and condemners of gun control. He was in the town that the high school shooting occurred in the State of Colorado just one day after the massacre, rose a rifle and said: I'll give you my gun when you take it from my cold dead hand! I always liked Heston movies and in fact two of them Soylent Green and Planet of the Apes are amongst my all time favourites but you should be an idiot to go to the town, where people have just lost their children to two maniacs and shout a stupid slogan like that. Moore asked him if he thought he should apologize to the people of Columbine. He left!
So this is the movie and of course I'm not going to narrate the whole story here. You've got to see it for yourself. 4.7 out of 5 and I deducted 0.3 because I would want him to have a longer discussion over the subject so the movie would be longer. Don't miss it.
(Photo, top: Moore's interviewing Marlin Manson in this scene of the movie. Manson was blamed to encourage violence in his songs! He answers the questions wisely)
Before Immigration Movies Western Culture