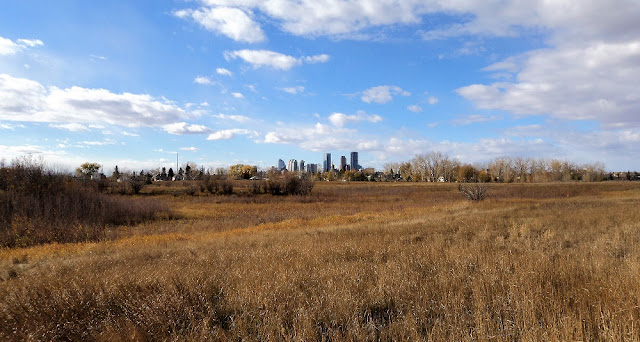 I spent a little time today on my volunteer work. Now that I have to do this stupid and disgusting job, I need something to keep my brain active. It was a beautiful, although a little bit cold, day: Blue sky of Calgary and puffy white clouds! The scene that I never get tired of watching!
Then I thought I should take a break by going out (I was in a McDonald's) and see if I can take a few pictures. I found myself near Inglewood Wildlands after a few minutes. Such a gem in Calgary.
I have been to Inglewood Bird Sanctuary twice and this is just next to it. I decided to go there instead of the sanctuary when I saw the sign. Although much smaller area but it still worth walking into.
Apparently this place was the site of another refinery and then was turned to a so-called wildland, after the refinery was shut down, of course, by different organizations.
This apparently had a significant impact on the neighbourhood. There is a row of houses just where the wildland is located. Imagine a tank farm in front of your house and tankers continuously commuting! That would have been a disaster! Now the neighbourhood is probably one of the nicest in the city.
This must have same story as The Old Refinery Park but I didn't find much on the net, not that I spent a day or something like that. I didn't spent a long time there as it's a small area, like I mentioned above. Besides I didn't have comfortable cloths and shoes on and a cold wind was blowing. Not to mention my pain in the left foot! Nevertheless I will go there again with my big camera soon to take more photos. It's recommended for anyone who like walking and light exercise.
(Photo, top: This picture shows that the so-called wildlands is not to far away from the Downtown. Bing early October and a dry summer has turned the place to a red-orange-yellow festival of colours which is hard to picture using such a simple camera. It's hard to ignore the beautiful deep blue sky above)
City Sightseeing