Christmas Eve Besides the Rivers! 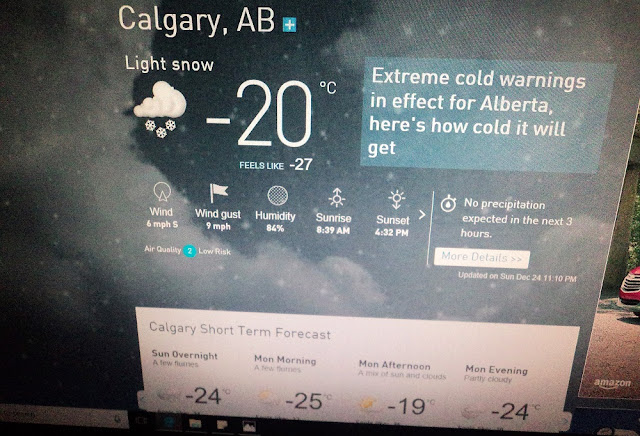 I came back after eating at Five Rivers Restaurant with The Chef. We started going back to the place last week but last week their buffet cost us $10.5 each while this week went up to $13.65! We were told that it was because they had added meat items to the menu! The Chef tried some of those. I didn't.
Anyways it was extremely cold in a way that The Chef wanted to go back home after the dinner. We walked to Apna Punjab grocery store (we didn't but anything and that was because we both were so full that we couldn't even think of any type of food) and then we wanted to go to McDonald's and hang out and have a hot beverage. He first refused but I told him I would drive although it was only 10 min. walk. He them agreed to go. He basically did not have enough on. Not for -17 ℃ cold, of course not considering the wind chill! We hung out there for perhaps 2 hours!
The roads were quite and uncrowded on the way back but a little bit slippery. And now I'm sitting here and writing these while listening to some music. Such an exiting night!
(Photo, top: Whether Network shows Calgary's temperature around -20 ℃ around 23:00 tonight. It is forecasted that the temperature would not be so different the next coming days)