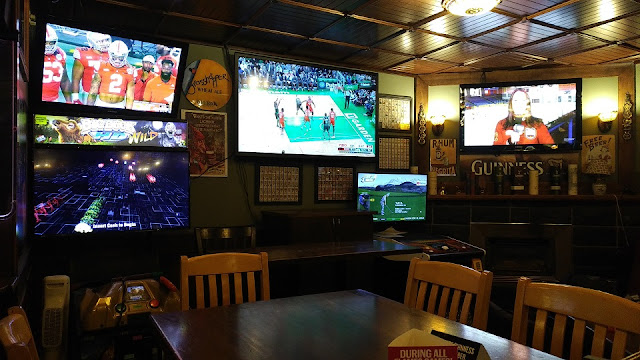 The Chef suggested to try a new bar in the town a few days ago and said that he didn't like Cowboys Tap House anymore(!) but like most of the things he says, he doesn't mean it! It's just something that comes to his mouth, without going through his mind (or goes and comes out without being processed because his brain is ruined as a result of years of drinking alcohol!) and come out!
I agreed and we decided to give Fiddler's Courtyard on Edmonton Trail, a try.
We went there at about 17:00 hours of something and there were only two or three tables occupied. A brunet cute girl came to us after we sat and asked us if we wanted to look at the menu. I told her that we first wanted a beer. The Chef wanted a jar but when the girl said it was $26, he backed off and ordered a draught glass only. I ordered a Kokanee.
There was a couple of old guys watching The Raptors game and one of them were screaming like a female donkey when you shove a big stick up her ass! Both I and The Chef didn't like it but no one seemed to be bothered by him. He was probably one of the regulars. The Chef gave him a number of dirty looks but he was too drunk to mind that. Fortunately the game was finished after a few minutes, in favour of The Raptor and the fucking animal got quiet. We then had a look at the menu and we decided to go with an order of Wings only. We waited but there was no sign of the waitress. I then went to see where she was. She was sitting with a waiter and wrapping forks and knives! I asked her if there was anyone who took order and she said she would!
The order, the Wings me out shortly. I guess it was as many as 8, perhaps, pieces of Wings, two cuts of Celery, two cuts of Carrot and a small cup of dip. The damn Wings were so spicy, or perhaps I should say drown in pepper, that I could barely eat them but for The Chef it was nothing. He finished the vegetables and the damn dip although it was bad for him. After the Wings and the second round of Beer we saw no reason to stay. There was practically no one there! No girls, not even old women and she was the only waitress in the bar! The visit cost The Chef a little more than $40 and we got nothing but disappointment out of it. I don't think we will go there again.
(Photo: Three TV sets were running at the same time all at one side of the bar! The other side was just framed pictures or paintings! I thought perhaps they wanted to separate the viewer's side and non-viewers side which is not a bad idea but I wouldn't put all the three screens plus the 2 games all at one corner!)
Beverages City Sightseeing Food Friends Western Culture