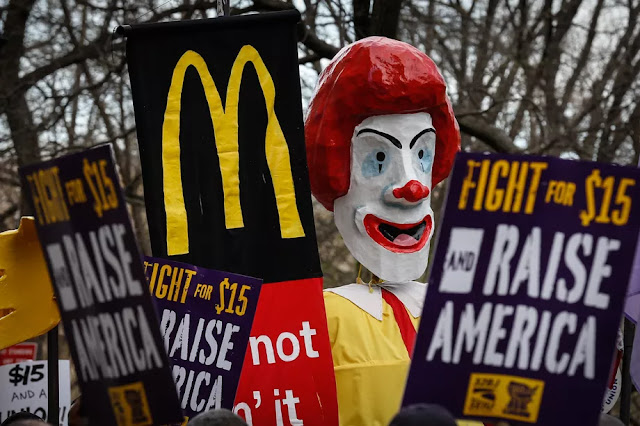 There was a discussion, as part of a meeting, this past week that there will be a wage increase for a number of employees who their performance is considered good! So this past Fri., which was a payday, I checked my pay-stub. There was an increase! A ridiculous and stupid amount:  $0.37!!
I don't even know why they bothered! If I work 40 hours a week, which is usually more than that, the total increase would be $14.80 and in a month, disregarding the overtime, would be $59.20!
I had a number of mistakes and then a few snitches complained about me. So my file is really not clean but at least I expected them to increase it by $0.50 and they even denied that! With the job market so bad, I guess I have no choice but to stick to this stupid job and survive.
(Photo: A rally in the US to request to increase the minimum wage to $15 an hour. An increase of such nature could cost millions to businesses which would lead to thousands of job cuts. A problem that Capitalists have not been able to overcome after decades!)
- October 25, 2020
Email ThisBlogThis!Share to TwitterShare to FacebookShare to Pinterest
Labels: Financial, Job