Stupid Ruling Regarding a Spy's Death 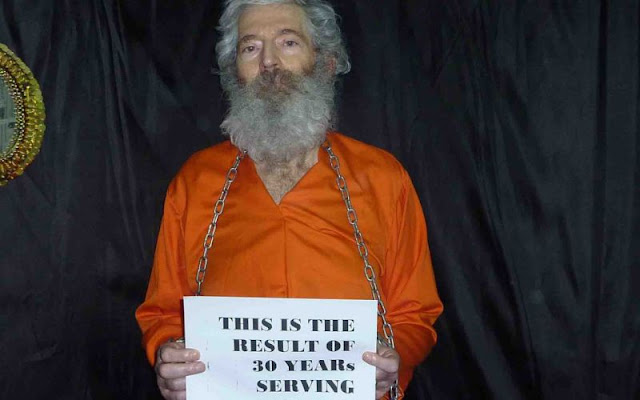 I wrote about the spy that the American's were looking for, in Iran, for a long time, a little than a year ago. I am no fan of the Islamic Republic but at the same time I do not approve of everything that the US wants to do at each and every corner of the world, being the World's police! For that reason when I read the story of the American spy, the CIA agent, Robert Levinson and his disappearance in Iran, after landing in Kish Island in Persian Gulf, I had no sympathy for him and his family.
How dare you, the family of the spy, to go to the country that your man went to, to collect information and then harm the people with that information, to ask for his release! It is thought the guy was handed to one of the groups that Iran works with in Afghanistan or somewhere and possibly died there. Now a stupid judge in the US has ruled that the Iranian government has to pay the family of the disgraceful spy a total of $1.3 billion! What a stupid joke! If the world would work like that then most of the revenue of the US Government should have been paid to different countries all around the globe as a result of the US intervention!
First of all the US Government or in fact the Americans should be punished for the 1953 coup in Iran when the elected government of Dr. Mossadegh was toppled by an American-led coup! And I'm not even going to the other parts of the world. Stupid, stupid and stupid! That's what you are judge!
(Photo: One of the picture of the American spy and CIA agent, Robert Levinson which was released to the public after he was disappeared in 2007. The sign should read: This is the result of 30 years spying! It is believed that this spy has died sometime this year. The funny thing about this dead fella is that he met Dawud Sallahudin, a Black American Muslim, who assassinated a former Iranian diplomat in the US, in 1980 and the fled the country and has been living in Iran ever since!)
Governments Politics