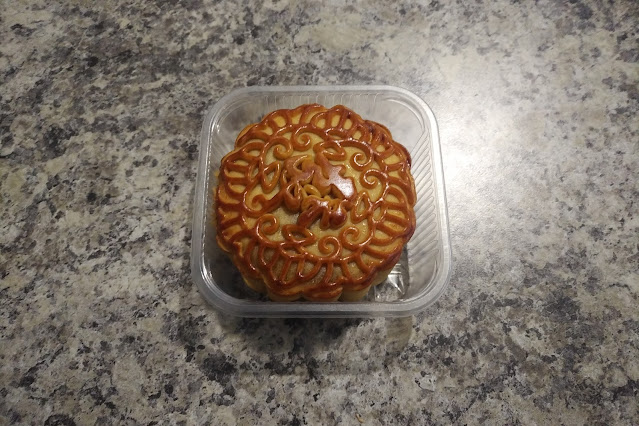 There has been nothing but hard work and home chores in the past 4 months and even before longer before that. Therefore there hasn't been anything notable to write. Bringing the stuff to the new place, trying to organize things and still I am far away from a comfortable house.
That aside, a week ago there was a sort of Chinese festival, I thing and they distributed a sort of " treat " called Moon Cake! I've heard of Moon Pie which is an American confection but I've not tried it.So I decided to try this Chinese thing although I have no good experience with Chinese baked items and food, in general.
It was not good! The so-called cake is basically made of some disgusting/unknown flour plus a think pate which should be a type of Bean, as that's what the Chinese use for their filling and then the oddest thing is a salted cooked Yolk in the center of cake which tastes disgusting! I'd never pay a Dime for something like that but I've been told that a small box of that goes for $50! Perhaps the person was trying to add some value to Chinese culinary world!
(Photo: A Moon Cake. Similar to most Chinese products, it is provided wrapped and in a plastic container)
Food Orientals